I have noticed that quite a few crossbows I see on here have pulleys at the limb ends Pulleys are not cams,which give mechanical advantage,and make cocking easier,all a single pulley can do,is change direction,no mechanical advantage.constructing a bow limb with a pulley on the end is much more difficult.so what am I missing,why is it done?.I am working on the assumption that nothing is done without good reason,so if any of our knowledgeable members can enlighten me,I would very much appreciate it.
Hermit.
Gnome

Hermit,
I don't know much about the math involved, even for such a simple mechanical tool as a pulley, but there is mechanical advantage- there has to be, I figure, otherwise rope cocking aids wouldn't do us any good.
On my current build I've been posting, I just started experimenting to see what I could learn. The first version had the string mounted to directly to the limb tips, to those little brass pulleys that come in rope cocking devices, in fact. They were just mounted to the pins with the ends looped around them. It was a bear to pull and I couldn't draw it very far with my bare hands. I made a longer string and ran it over those little brass pulleys and attached the ends to the back of the stock, and it was easier, but not by much. I replaced the little brass pulleys with larger plastic ones and it actually became workable.
I had an intuition that using the pulleys would make it easier to draw, but was more than a little surprised when I upped the size of the pulleys again and it dramatically increased the force applied to the projectile, evident by the speed increase.
How does it work? I don't really know! But unless there is some other variable that I'm missing, it does work. A true compound system would have the strings terminating at the oposite limb ends, and an even more efficient compound action would use cams instead of pulleys. My limited understanding of cams is that they don't provide more mechanical advantage than a comparably sized pulley, they just distribute the release of energy differently.
Gnome
Hermit

Thanks for your reply Gnome,you have the advantage of me,in that I have no experience whatsoever of limb end pulleys,never having used any kind of bow with them.I have had some experience with pulleys,and know that if the pulley pin is not properly fitted through an appropriate bearing material,it can and will bind.Pulleys are generally the same as gears,you can speed them up.or slow them down with appropriate torque advantages,but you have to have more than one.I don't doubt what you say tho',as I have been around long enough to have seen that what won't work in theory,will often work well in practice.
Hermit.
Gnome

I appreciate your inquiry, Hermit. Reminds me that maybe I could spend a little time re-aquainting myself with some of the simple math and science I could have explained to you in Latin when I was in 4th grade, but seems to have been crowded out of my gray matter in recent years by such important data as Star Wars trivia and dirty jokes...
Gnome
Hermit

Sadly,latin was always my weak point,Mandarin chinese would have been better..........
Hermit.
Gnome

My wife has a little Mandarin, maybe she can translate!
Actually, this pulley thing has been bugging me all day. You are correct that in a simple arrangement, with force on one end of a rope, a pulley hooked to a tree and a weight on the other end, there is no mechanical advantage, just reversal of direction. Then it occured to me- in the case of the rope cocking device, and also in the case of a pulley on a limb end, the pulley is not attached to a stable location, it's attached to the mass you want to move, so you are pulling twice as far, with your hand taking half the weight and the tiller of the crossbow taking the other half. It's more like a single stage block and tackle than a single pulley arrangement.
Gnome
Rizzar

I have some problems to understand what is meant by pulley cause my dictionary gives various meanings.
either a single fixed roll with a rope around to alternate direction, or more a not fixed one (I think that is meant by block and tackle?) with benefits in work.

So If you mean the pulley to have a translation of physical work this is exactly what a compound crossbow does with its limb wheels.

A simple one has a translation of better than 2:1 since it is a normal pulley system with a free roll in addition to a drawback from the string fix on the other limb.

A congenious addition of a cam instead or in addition to a pulley gives the advantage of alternating leverage adding benefits (work/speed) in certain stages of draw/release.

Yes, Rizzar, I think that is the conclusion I've been stumbling incoherently towards!
Gnome
War Song 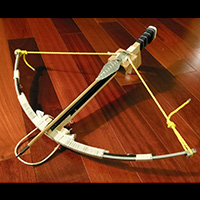 A pulley wheel is just a lever that spans 360 degrees.
Hermit

the physics of levers is based on 3 things,the fulcrum,the load,and the effort.The fulcrum being the pivot point,load and effort being self explanatory.The result is dependent on the distance from the fulcrum of both the load and the effort,and it's proportional relationship.For example,if the load is one foot from the fulcrum,and the applied effort is 2 feet from the fulcrum,only half the effort is required to move a fixed load.Knowing these facts prompted my question in the first place,as I could'nt see where the advantage was in doing the extra work fitting pulleys.As I also said,not everything that is theory converts to workable facts.
Hermit.
Rizzar

I am sorry if I brought some nomenclature confusion into it!

The thing we have on a compound crossbow is a simple moveable pulley which gives not just an alternating angle, it gives a translation.

How it works (3rd picture) is exactly the thing it does on a crossbow
It is a moveable pulley with a load (limb) and one side fixed to an even beneficial moving point (other limb giving more string when drawn).

The string center is the point that finally "lifts the load" (limb).

So you would need at least two pulleys, but I seen a lot of builds on the forum with just one pulley (per limb)? Are those redundant then?
Rizzar

No, one pulley is needed for improved translation:


And I think most of the compound crossbows here work the same way.

Ah I see, it would operate as a secondary lever, with one end of the rope tangent acting as the fulcrum and the load sitting between that and the force applied point.
Hermit

Thanks Rizzar,I did'nt think of looking it up on wikipedia,but now that I have,I see where the translation comes from,before that,I could'nt for the life of me see the advantage.I don't know what your language is Rizzar,but I'm sure you do better in English than I would in your language.
The oxford dictionary definition of "Pulley" is as follows:
Grooved wheel fixed in block enabling weights to be lifted...............and.........Wheel or drum fixed on a shaft and turned by a belt for the application or transmission of power.Hope this helps.
Hermit.
Hermit

Thank you, german is my native language.

Usually I do not have these problems concerning english.


But when it comes to the situation of little words having various meanings turning the sentences whole context, it is getting difficult.

Since I was reminded on this topic by incidence, I have to point out that my statements rely on simple limb systems with clearly a single rotating pulley on It.

The cam systems can/will operate in a different way.
Hermit

» "Pulleys" out of dyneema
» Looking for information about pulleys, coils and springs
» Can we use mechanical pulleys to increase load tension?
» Compound twinbow pistol (posts vs pulleys)
» Split limb