I started out playing around with trigger/release ideas using cardboard and push pins because I wanted to try out a roller nut release with a conventional trigger. I then moved on to 1/8” plywood and dowels. Then I thought it would be a good idea to make a trigger/release “box” that could be dropped in to a tiller, so I fashioned one from some ½ “ imbuia (embuya). That worked out well then realized I needed a tiller to test it on and made a basic tiller from two ¾” by about 2 1/2” softwood boards and tested and it worked.  Of course now I wanted to shoot it so a shoulder stock and pistol grip appeared along with oak top rails and side plates and a bit of maple for the fore stock. The nut, trigger, sear and axles are all wood at this point but that will change once I get some Delrin and some metal working skills. The prod is from my first build, a dual tension bar lam that I cleaned up. The prod is “lashed” for now with zip ties. Still need to add a stirrup, bolt hold down thing and sights of some sort and a trigger guard. Suggestions would be greatly appreciated. 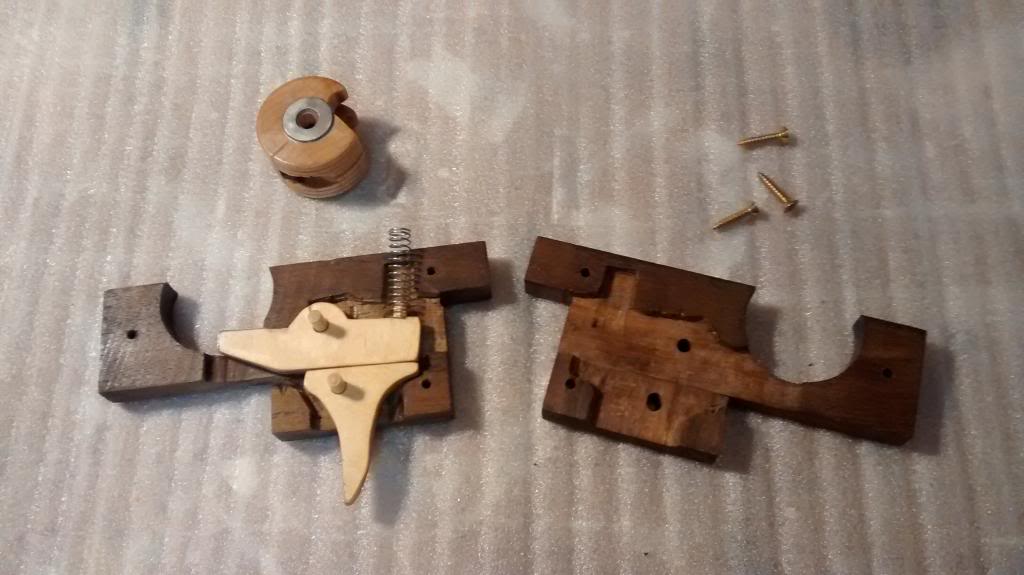 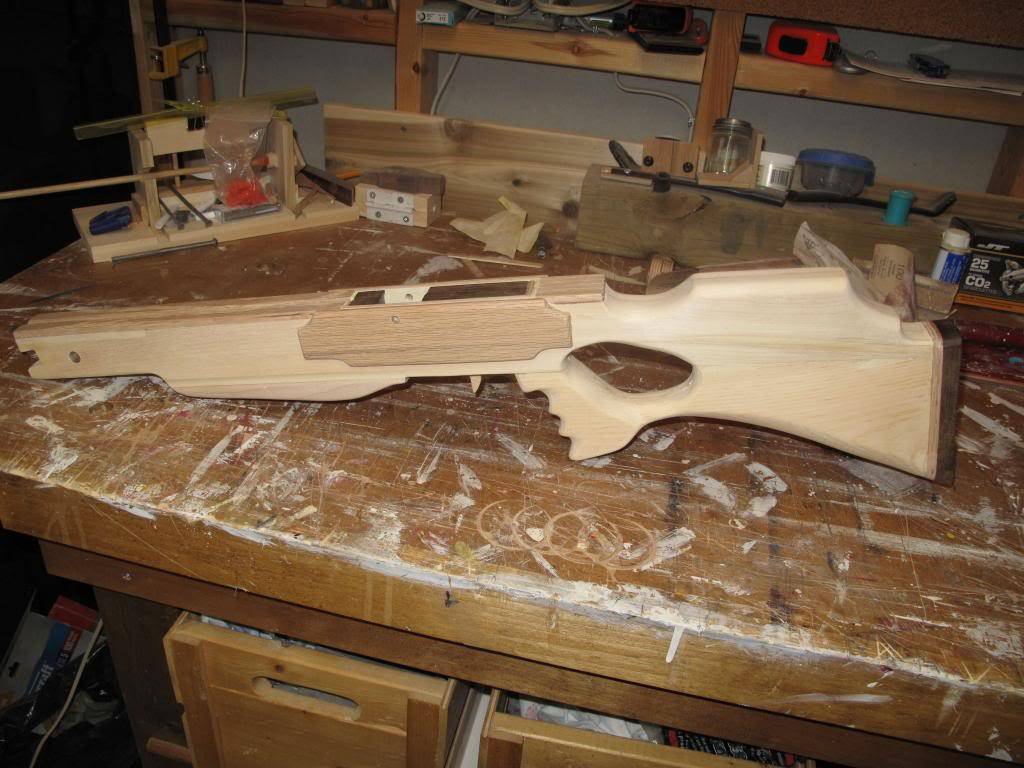 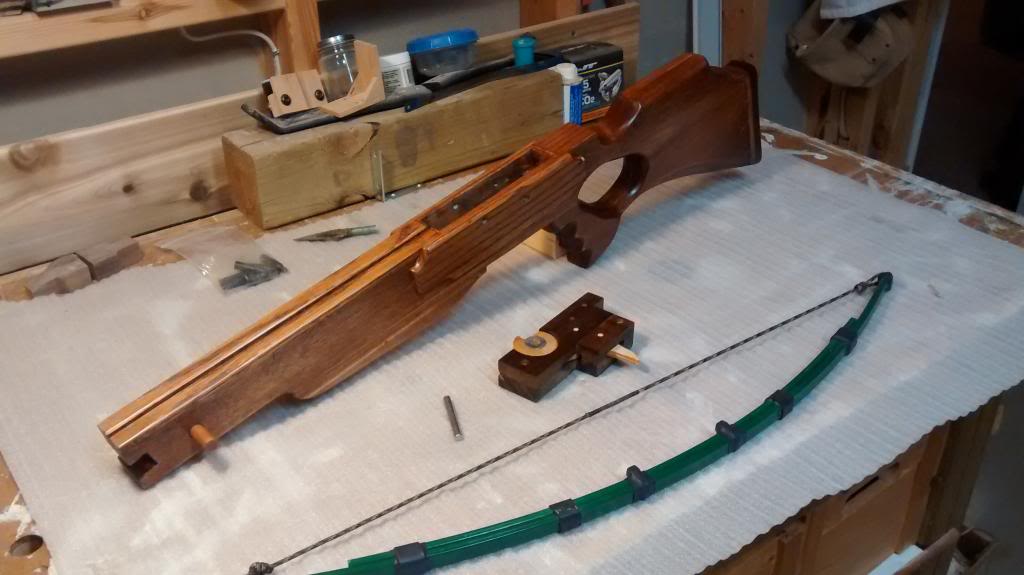 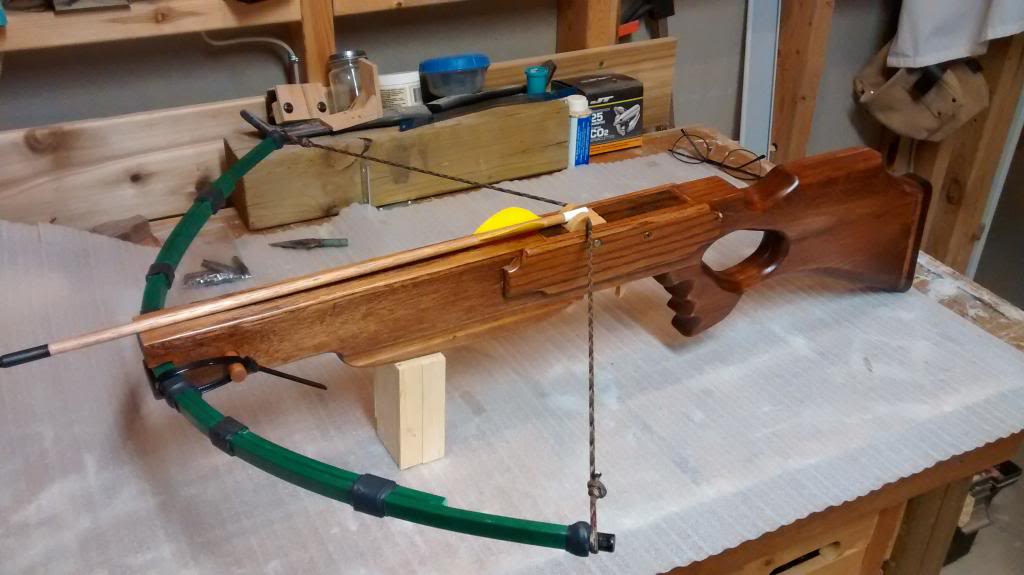 Nice work. Love the lines of the stock. How many pounds is the prod? For a bolt clip you could use a strip of steel cut from a hand saw blade. I have also made them from a strip of PVC cut from a piece of pipe and using a heat gun to thermal form it to shape.

Here is a pic of my front sight: 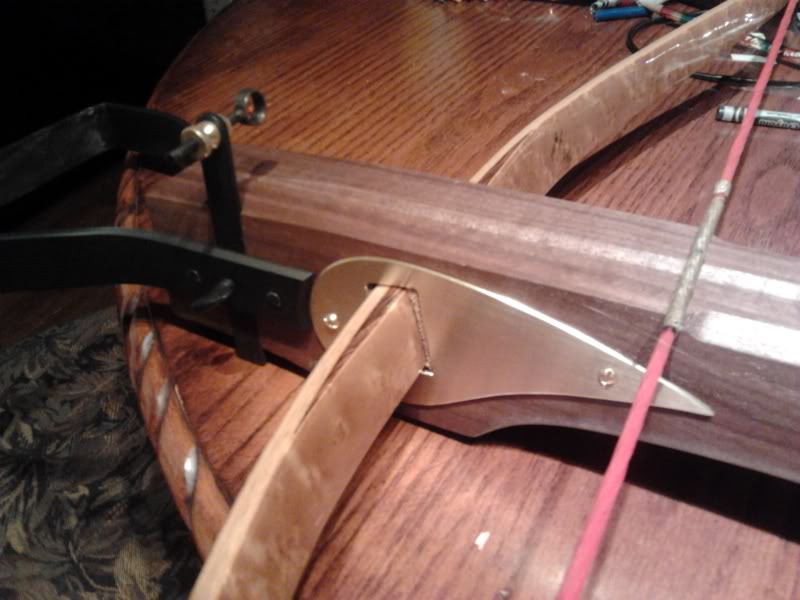 And my rear sight and bolt clip (PVC): 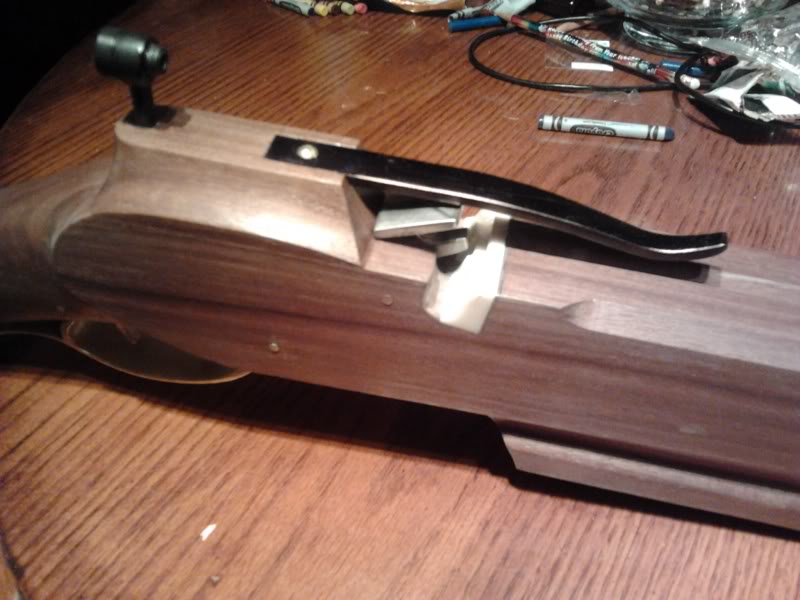 Nice work!  Man after my own heart -- working wood that is!  Great look.   How's that wooden trigger mechanism working?
Hermit

Good looking crossbow,from someone who is obviously a highly skilled woodworker,with patience,and an eye for detail.With your obvious experience with wood,I doubt working with metal will present many problems.
Hermit.
phuphuphnik

hmmm, I wonder if I could cast those lock sides out of aluminum. I bet an open face mold would work, then machine the open side flat.
woodsmith

Thanks to all for the comments.

Todd, the prod was pulling just under 80 lbs at 14" when I measured it for the first build and for this one its drawing 13" so somewhere less than that. With all the wooden trigger/release parts I wouldn't want to go any stronger. I have some PVC and a heat gun so might try your bolt clip idea.

kenh, the wooden trigger mechanism so far is working but I'm wearing safety glasses when using it and probably should be wearing my hockey helmet and face guard. I doubt its obvious from the pics but the roller nut is made from two wooden toy truck tires glued together and then drilled/filed/carved to get the claws and sear point. I'm figuring the two halves will shear apart any time now hence the eye protection.

Hermit, my big problem working with metal is the lack of tools. Other than a hacksaw and a whole bunch of files I'm not equipped for that now but some day soon yes. Some 30 odd years ago when I was doing my mechanical engineering technology courses I worked in the machine shop and really enjoyed it.

Mike,if you have a drill press with a vice,that,files and hacksaw is really all you need.A digital vernier or micrometer is nice(you probably have the vernier)also,a small engineer's square.An angle grinder(you can pick one of those up for around 40 bucks)speeds things up,for cutting and rapid removal of metal.
As I mentioned in an earlier post,I used to get Model Engineer magazine in England,and one of the contributors did a series of articles,where he built a model steam engine using nothing but hand tools,even the drill he used was hand cranked.With the kind of precision needed for a functional model steam engine,crossbow parts(including trigger mechanisms)are more than doable,especially for someone with your skills and attention to detail.Machine tools are nice,and they do speed things up,but when I need to something,I ask myself "how long have people been doing this?",and almost every time,it is an operation that was performed before machine tools were around.I look forward to seeing your next trigger mechanism.
Tony.
phuphuphnik

Hey mike, send me the dimensions and I'll make a delrin nut for you. I have loads of it. I'll even put a hole in the middle for you.

Tony, thanks for the tips. I have a cheap bench top drill press but not the vice. There have been a few times drilling wood where I figured I could just hold down the work piece and almost lost a finger or two. I can see a vice, bolted down, would be a must when working with metal. The drill press table is almost impossible to set exactly at 0 (90 deg), there are no detents at say 30, 45 90 just a scale and no matter much I try it moves a fraction when tightening the toggle. Not a big deal when drilling thin stock but..... An angle grinder has been on my wish list since reading many posts here about making trigger parts. Saw one on sale couple weeks ago for 70% off and should have jumped on it. My neighbour has one so I'll probably borrow his mind you I've had his heat gun for months now so better return that first.
Mike
woodsmith

chriso, that would be awesome thanks, I love this forum! I'll PM you
Hermit

Surely Mike,you've been to my favourite toy store,Princess Auto?they have them over there I know,that's the place for drill press vices,and angle grinders cheap.You don't have to bolt down a drill press vice usually,unless it's heavy duty drilling you're doing,but it makes it much easier,and safer holding the vice with the work in it than trying to hold the work.
woodsmith

Yes Princess Auto, I should have thought of that. There's one very close to here so I'll definitely go check it out.

I'm going to try Todd's suggestion using PVC to make a bolt clip and will also try it for a trigger guard. I've heated, cut and flattened a couple of strips and hopefully have them done soon. The PVC really gums up files and sandpaper, you seem to spend more time cleaning the files than actually shaping the pieces.

Todd, what kind of paint did you use on the PVC?
Todd the archer

That is not paint, I used a black sharpie marker. But I have made several PVC bows and just used regular spray paint with good results.

Should mention For shaping the clip you could do it free hand but I made a top and bottom mold from wood. I heat the PVC strip and lay it in the bottom mold then put the top mold over it, clamp down lightly (by hand would do) until it cools which is something like less than 30 seconds.

That heat gun you borrowed from your neighbour  will do the business on the clip Mike..............lmao!
phuphuphnik

I sent you a PM about the nut. I have one that is a tad narrower but already had a steel plate in it for the tickler and a center hole drilled, would that work better?
I can get it into the mail tomorrow.
chriso
woodsmith

Thanks chriso, the tad smaller nut will be perfect, I sent you a confirming PM.

Hermit, the heat gun worked wonders for the trigger guard, just have to paint it now. the micro point sharpie I have is not going to do the trick. 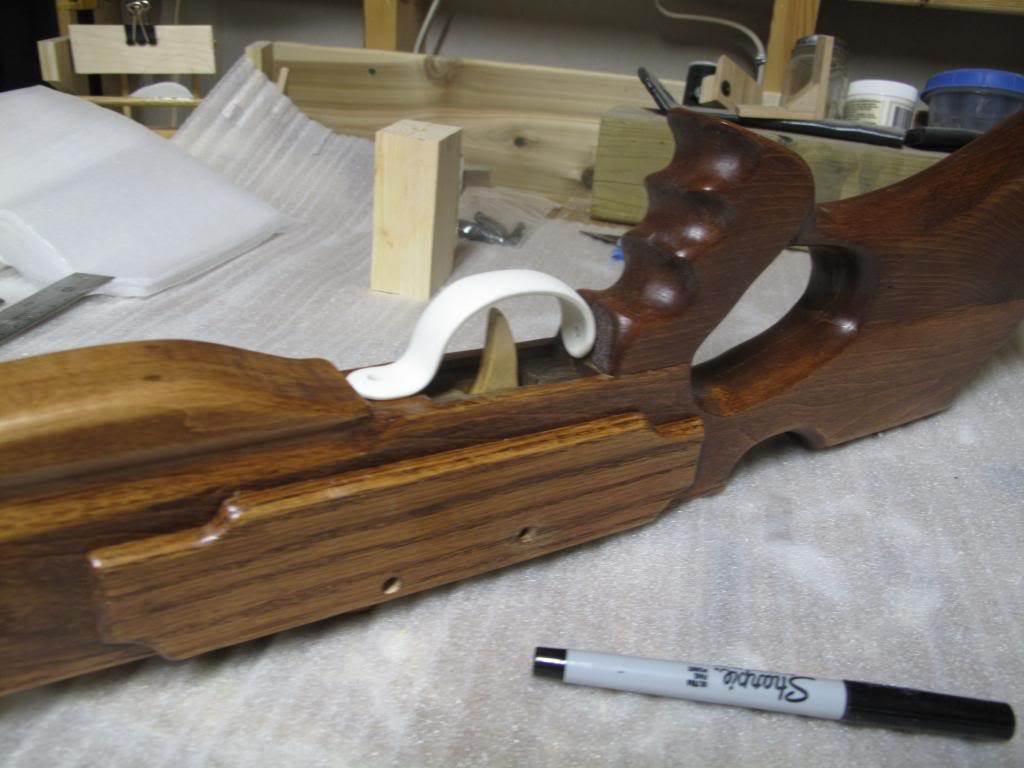 Don't thank me,thank the neighbour!............as always,it's nice to know that I can pass on something useful.
Hermit.
Sponsored content