jaeger22 -- John -- is building a replica of a Han Dynasty (206 BC - 220 AD) crossbow lock, with the intent to set them up for production using CNC milling technology.  The originals were made from bronze.  For prototype purposes, John is using a combination of brass and steel parts. See pages.  See the development discussions at
https://thearbalistguild.forumotion.com/t1231-universal-standard-crossbow-nut

China, for all its inventiveness in some ways, was ultra conservative in others (still is for that matter).  That Han crossbow lock was still seeing service 1200 years later (!!) during the Ming Dynasty (1368-1644 AD).  "If it ain't broke, don't fix it." as they say!   The design is simple and efficient what more can one ask?.

Stephen Selby's commentary on the pages is just enough to tease a crossbow builder!

I've had some other folks at the Asian Traditional Archery Network translating some of the text of the illustrated encyclopedia sections which describe the design, construction and use of that military crossbow.  The article gives detailed Chinese measurements which are also being converted into metric and English measurements.  Many thanks to Peter Dekker and Justin Ma for their translation skills in this endeavor.

With some of the measurements in hand, I used a drawing program to scale up the illustration of the tiller (from the second page) to "full size", and printed it out.  The sketch is at best a 'cartoon', but does give the basic profile shape of the tiller, subject to some changes to make it actually functional
kenh

Message  sent.  Harden away, I'll not be adjusting things.  Pins... whatever works, since they don't show.

This is gonna be fun.  I did a bit of work today thinning down the prod leaves a little.  Got the tiller re-designed so that the pistol grip actually works and my finger can reach the trigger.  Gotta see what wood I can come up with.
jaeger22

Hardened, packed and shipped.
Hope it works well for you!
John
jaeger22

jeep wrote:You make it different with the original: one of the two slot of the nut (the left one) is normally higher to level with the deck.

It took me a while to see what you meant but now I get it.

Yes that is a great idea and the next time I make one I will make the gap on the left between the claw and the long arm set up higher so it will be level with the deck of the trigger box.
Thanks for the idea and the photo.
kenh

Thanks John!  I'll keep my eye out for the package.
kenh

The action arrived safe and sound.  Really nice work.  The trigger pull is crisp and with the long trigger itself, I think it's going to have a great feel.!
jaeger22

Great! I look forward to watching the rest of your build!
kenh

Here's the first "rough out" of the prod and tiller. 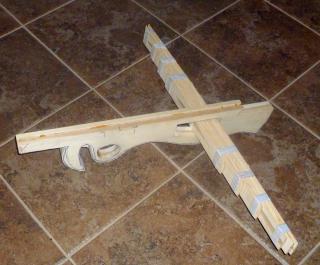 The prod laminations need to be slightly tapered before I try spanning that assembly.  I may or may not try to use all six laminations to start.  That's the beauty of loose laminations, the power can be adjusted easily.  All I'll have to do is make different wedges to hold varying number of lams in place.

The tiller is a glue up.  Two pieces of 1/2" thick with a piece of 1/4" in between offset to make the bolt channel.  Two additional pieces of 1/2" oak will be added after the lock mortise is cut and before the tiller is rounded out.

The antler inlays for the nose of the tiller and 'butt plate' also need to be cut and fitted.
jaeger22