Let's put a laser on it!

Let's put a laser on it!

I "finished" this build, the Margot, a few months ago (I never really finish anything) and had it as pimped out as I could- red dot sight, laser, even clips for onboard strorage of four field points. I was feeling pretty smug and pleased with myself, when I noticed the cracks in the fiberglass prods coming out of the center mounting. Guess I wasn't done with it after all. 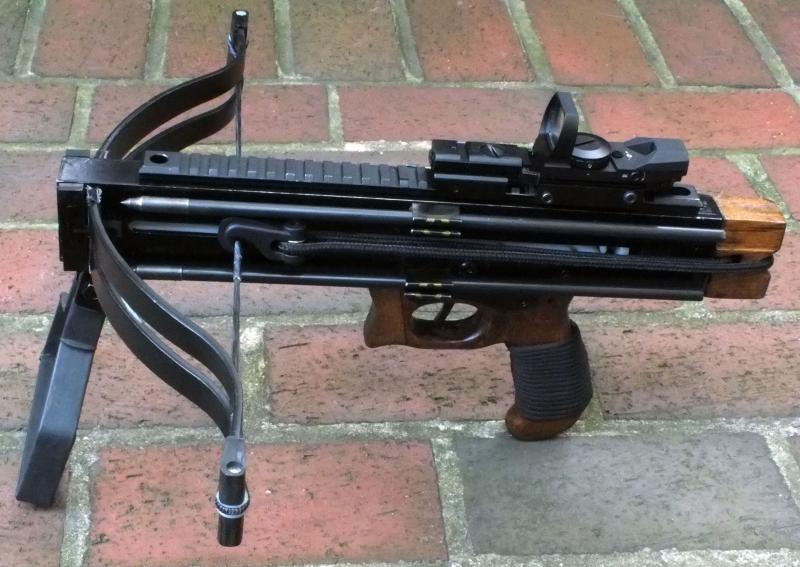 I knew it wasn't just a question of replacing the prods, I had to figure out why they were failing and try to prevent it. I had a sinking feeling that it might not be a quick fix, and I was right- once I had it all disassembled it was obvious the cracks were coming from contact with the slots in the aluminum chassis they were mounted into, despite the padding I thought was ample. This build has already been down a few dead ends and has a lot of extra screw holes to show for it, and had a few other inherent problems, so rather than mess with it any more I did a brand new build, the Margot Mk II: 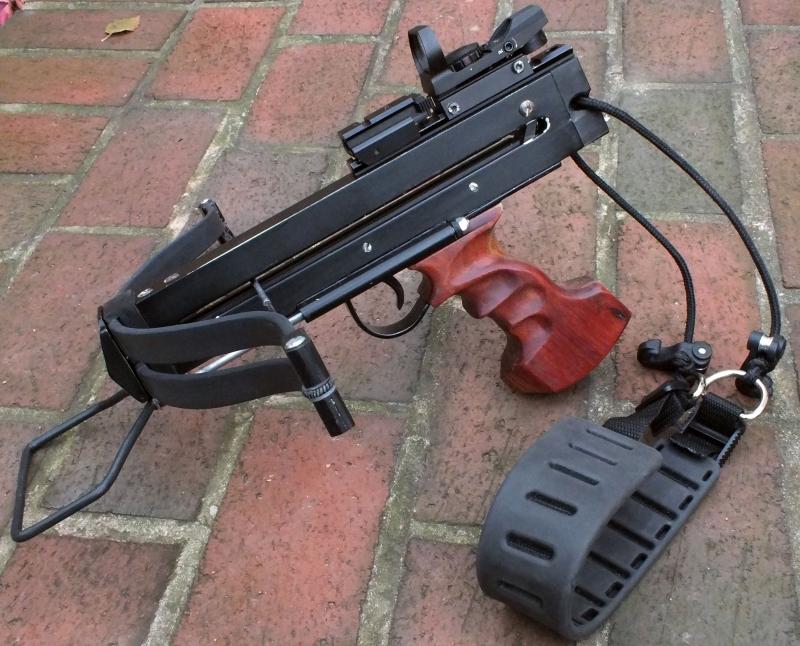 This one is more compact and much better balanced, the first one was very front heavy while with this one the center of gravity is right there in my hand. It's much shorter, mostly by getting rid of unneeded length but the total draw is also about an inch shorter, a concession to extending the life of the limbs. The prod mount block is carved from a block of Delrin with an aluminum plate in front holding the limbs in place. I recently invested in a tap and die set and I've been using it a lot on this build. The butt cap in back, the internal rails, limb tips, and over claw style string retainer are also hand carved Delrin, while the trigger and toggle lever are cut from 1/4" Delrin sheet. All of the changes made to the design were intended to increase the durability and shootability of the weapon, and in most regards I think I succeeded- the action is smooth and solid and crisp, the balance couldn't be better, though it is a bit heavy for one hand. I substituted a rubber shoulder pad from a rifle sling in place of the wooden grip on the cocking rope, I found it natural to hook it over my shoulder to get my hands free and this one is even better at that. The limbs, 80 pound fiberglass pistol prods, are seen here completely sheathed in shrink tubing.

So, how does it shoot? Well, I put maybe 50 or 60 shots through the first version before I noticed the limbs failing. This one I've fired twice, and twice I broke brand new limbs! I think it was Geezer mentioned recently on another thread how if you change one little thing and it impacts everything else. I have to figure out what I did wrong, I've been through a few theories, right now I'm thinking it might be that the new string was a bit longer than the original. Good thing I have a bunch of those limbs, because I'm going to keep breaking them until I find out! In the meantime, I guess it's fun to look at. 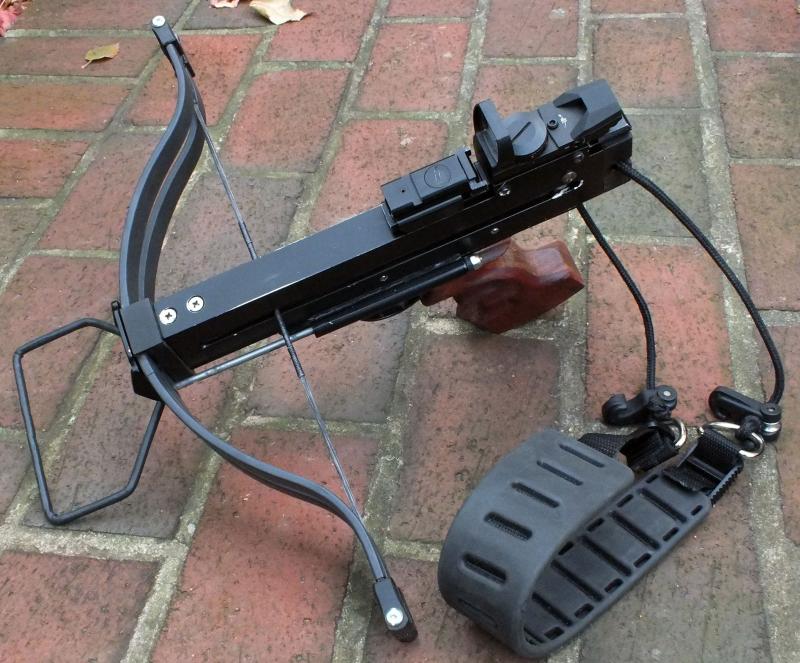 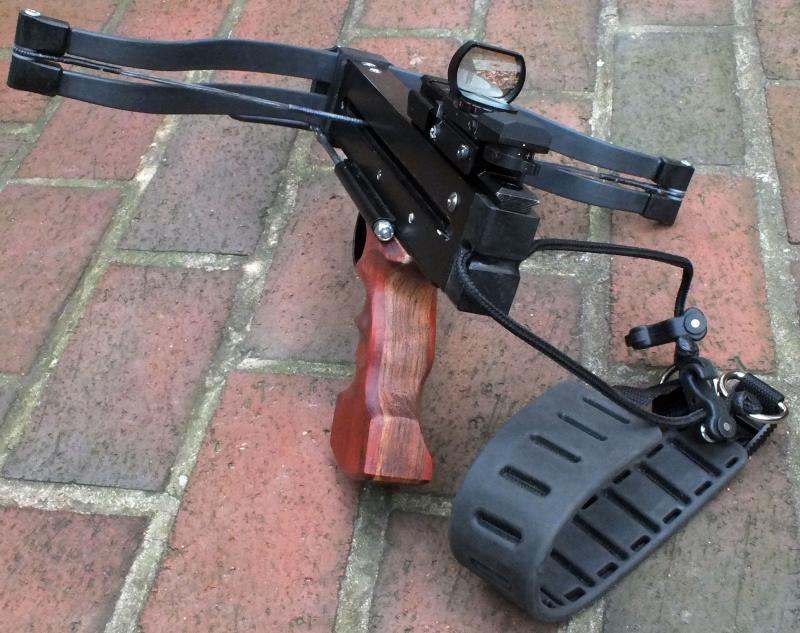 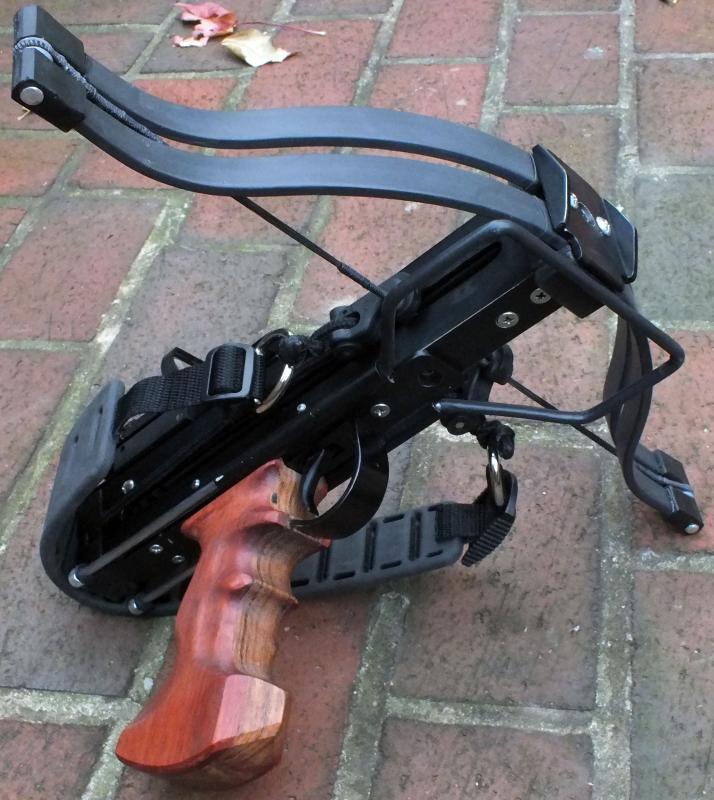 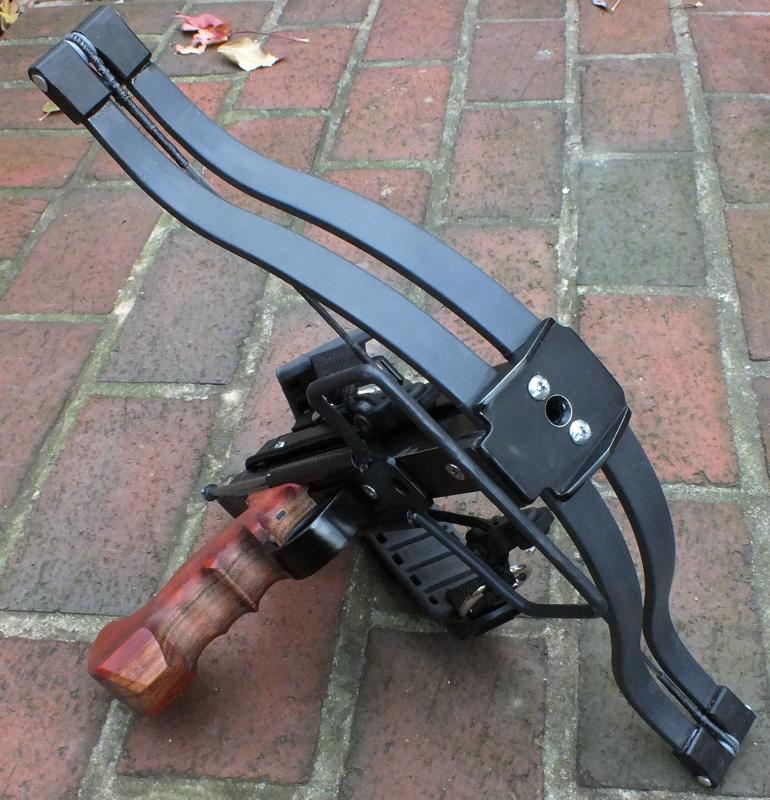 Hope you figure it out, looks awesome!

How long are the prods and how high is it braced at?

Hey Todd, from pin to pin is almost exactly 18". In these photos I have the old, shorter string on, and the brace height is 3". The longer string I had on before made the brace height about 2.8". That meant that the string was actually a little in front of the limb at the recurve, rather than being almost perpendicular to the limb tips as you see here. My current line of thinking is that maybe the prod tips traveled too far forward on firing, trying to reverse the deflex, and that caused the limbs to delaminate. That's how they failed, by the way, splitting apart, rather than cracking or breaking, which also makes me wonder if I just got a batch of defective limbs.
Another thing I usually do as a safety precaution when breaking in a new build is to use very heavy bolts the first few shots. I didn't do that because I was also experimenting with a new bolt design, yet another variable that isn't helping me get to the bottom of the failures. The bolts I fired weren't super light, though.
Gnome
Gnome

Finally! I made a few changes but I think the key was a shorter string. I've fired it maybe twenty times without incident. Got so excited I decided to post a video, please excuse the poor quality of my first attempt.

The laser is dialed in for greater range, obviously, and though I like using it and the red dot scope, I want to develop a solid, low-profile iron sight solution. As currently configured, this would be almost completely useless without batteries! Also on the to-do list: a safety lock, on-board bolt storage or quiver, and a set of bolts with threaded receivers for judo tips or mechanical broadheads.
Gnome
Sponsored content