This build was an idea inspired by the Victorian era bullet bows as well as a mix of ideas that came from this forum's community. The design of the tiller is a copy of a flintlock circa 1750, the kind that French colonists would trade to the Indians of north America for furs. Heres the first drawing I did for the overall design 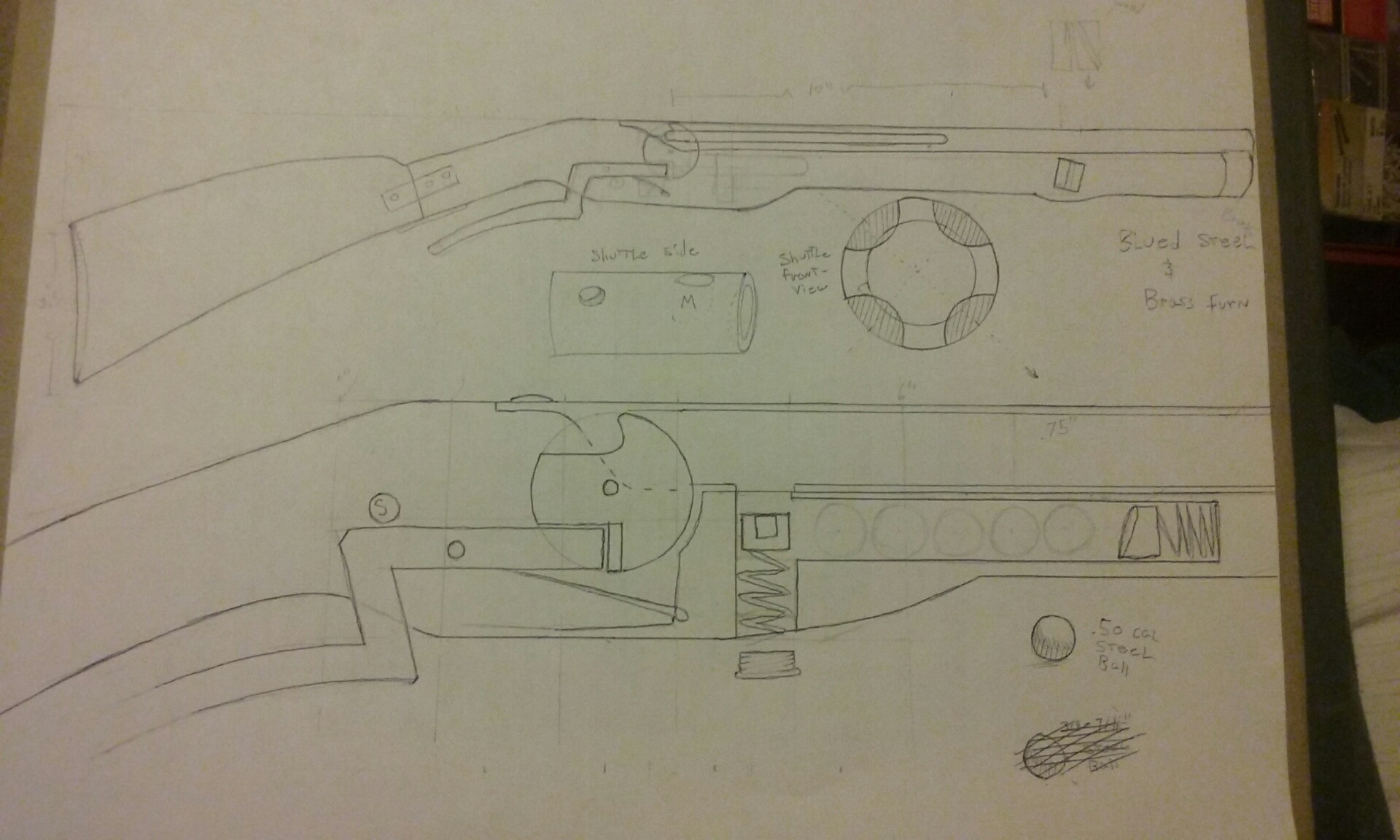 I've already trashed a lot of this design but it gives you a general idea on what I'm going for.

I had my heart set on something that could throw .50 cal steel at about 200FPS and was quick to draw and load, so I cut the barrel to accomodate a power stroke of 11.5" however the prod will only be about 90lbs, as I understand, with light projectiles its the powerstroke that does most of the work rather than the draw weight. I came up with a sort of tube magazine built into the tiller similar to a Girandoni air rifle and I plan to have a little lever or bar that will trip a ball into the barrel when activated. I wanted a rifle-sized crossbow, but I also wanted something compact and portable to take on woods trips, at first I decided to settle on a short musketoon style of tiller but later I discovered some really nice flintlock rifles that were designed with collapsible stocks to be portable on horseback, so I decided on something similar.

Here's a few pieces of cherry I'll be laminating together with a red oak core to make the tiller, and the slotted barrel next to it, which looks really bad in some spots where I botched the cut (was using a small dremel tool with no sort of guiding jig), however all of the rough spots are parts that will be inletted into the stock and wont be visible in the final crossbow. 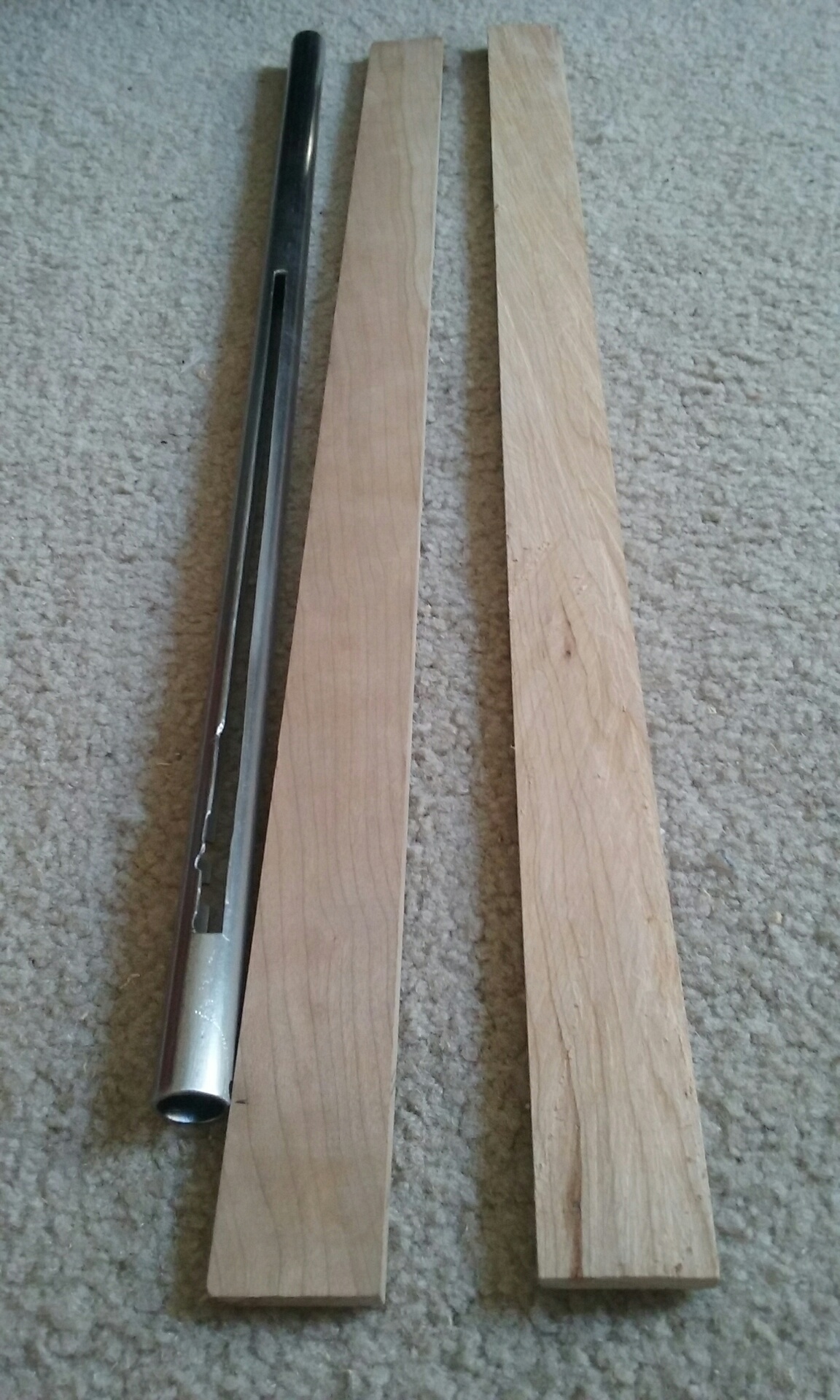 I'll have more progress to post in a few days, hope you like my idea.
c sitas

X; one way you might try to fasten your magnets. Take a cutoff wheel on a dremel and scratch up the back of the magnet. Don't go deep here  but , scratch up good. Use gorilla glue , not tooooo much  either. I like to take a small amount and premix it. In other words,take a small amount and add a couple drops of water to it. Let it set until you can see it "start" to bubble. At this time take a small amount and glue your magnet. Your shuttle is where the problem will come from,scratch it up also. Using the stuff this way ,you have a lot more control over the the glue job. It won't be running all over everything.You probbally know this already ,but it's a good tip to help someone that don't know.The real trick is to watch and get it to "just" start to bubble.Once it bubbles toooo much and you disturb it , you 'll ruin the attachment  of the glue.Let the stuff fully harden ,like over night and you can sand it to fit .
septua

Xam
Still another option can be a hold down as used for arrows. Make an elongated access hole on top for the tip then both steel and lead balls will be held snugly against the cone and that hold down will be fixed to the barrel. If the hole extends forward enough the ball can seated with a fingertip. A slight down pressure on the shuttle by the bowstring combined with the cone front will eliminate wobble and the inaccuracy typical of ball shooting slurbows.

Excellent ideas guys, I'm pretty set on my own idea which is to drill out a cone for the ball to sit in and either epoxy a small disc magnet into the bottom of the cone inlet or drill into the lateral side of the shuttle and insert a rod type magnet in the hole. I want the magnet to not only hold the ball in place until fired, but also to pick the ball up as it comes through the magazine into the barrel so that I don't have to rely on gravity to seat the ball.

If development of this project continues on past completion as I hope it does, ill make another shuttle that uses slight clamping force via thin springs on the sides of the shuttle (like a crossbow bolt clip but on all 4 sides of the bolt instead of just one), which I could use for lead balls and steel. This shuttle could even be made out of a single piece of Acetal dowel if I could cut very thin tapers as the retaining springs.
Andy.

You guys may be aware of this gadget to further inspire your brain storming.....

It's been a while since I last worked on this project but I'm happy to say I'm once again making progress and i have the tools needed to progress onward. Here is a look at the freshly cut and fitted lock plate, i still need to drill all the holes for it. 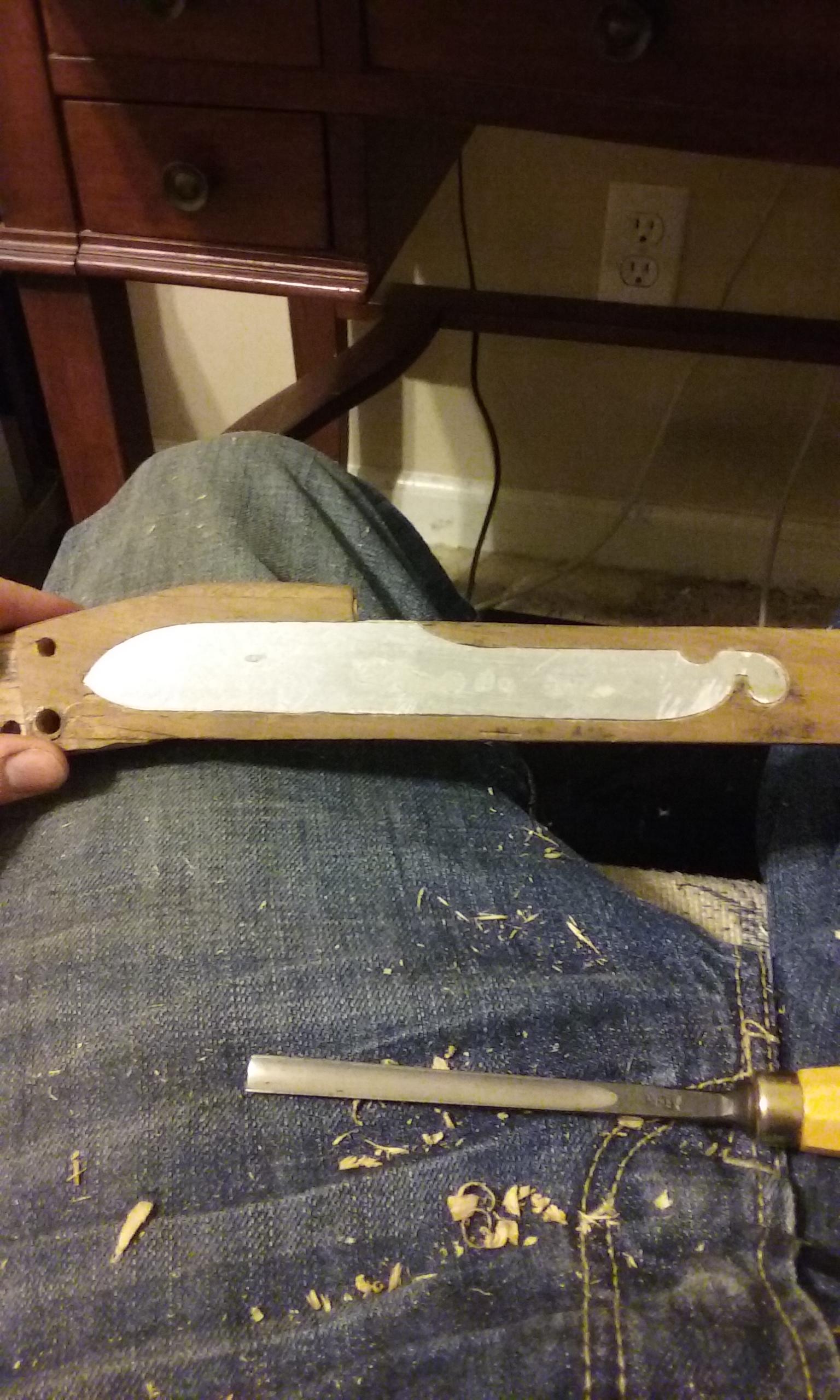 There is nothing i regret more in this project than the shape of this piece, it could have been simplified but nooooope, i had to personalize it with the little swirly bit at the end, took a full night to inlet the shape, haha.
Onager Lovac

Dude i thought you were dead, you did that inlet by hand? Nice.
Xamllew

Nope, not dead, just broke my dremel and couldnt afford to replace it so i put everything
on hold for a few months. Glad you like the inlet work.

I think all i need now to have this thing testable is a prod and a shuttle to fit to the barrel, then i can finally try to lob some bearings.
Onager Lovac

Nice, i stoped doing crossbows a few months ago, more into shotguns and muzzleloaders now, but i still like to check the guild once in a while, keep it up

Whatever spanning method you use make sure the bowstring stays clear in the barrel slot. That barrel is not just for an authentic look. The “shuttle” with some down force on the inner bottom of barrel will give reasonable accuracy. This means the shuttle top can be trimmed down to reduce weight.

The historical ball shooting barreled crossbows did not use down force so the ball was just roughly guided on its way as in a BB gun.
Onager Lovac

God dammit, now i feel like making crossbows again, yo Xamllew don't take to long with this one, i remmember starting to work my last crossbow a few days after you started this one. 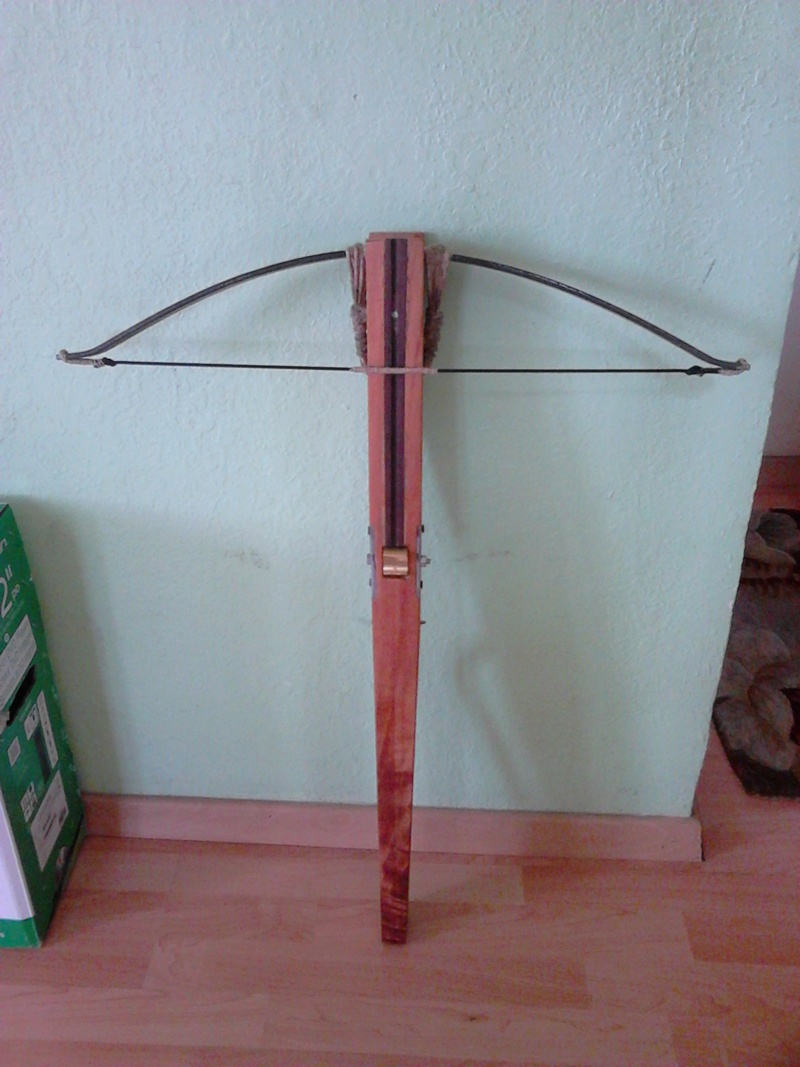 I actually remember thinking to myself: "I bet i can start and finish a crossbow before this noob finishes this one", lol, no ofense

Whatever spanning method you use make sure the bowstring stays clear in the barrel slot. That barrel is not just for an authentic look. The “shuttle” with some down force on the inner bottom of barrel will give reasonable accuracy. This means the shuttle top can be trimmed down to reduce weight.

The historical ball shooting barreled crossbows did not use down force so the ball was just roughly guided on its way as in a BB gun.

By "downward force" you mean the pressure of the bowstring against the shuttle/track? I will make sure to align the prod's back or inward bending face to the nut of the crossbow so that when the string is drawn back the pressure on the track will be a lot lighter than when at brace height. The nice thing about the barrel is that it will keep the shuttle more or less perfectly positioned regardless of which way the bowstring wants to push it, the prod can even be crooked and it shouldn't effect the shots.

@Onager Glad you got the crossbow fever again, your last crossbow came out really nice. I plan on having this thing functionally finished by the 20th or around there. I definitely would have been done a long time ago had I not had set backs with broken tools, a cracked prod, and a bunch of poorly made parts I had to throw out after spending hours filing and sanding to shape, but it aint a race.

Progress, the lock is fully drilled and fitted, now im drilling out the prod hole and cutting some reinforcing sides (sorta like a padre bow) for it.
Xamllew

Here it is with all the major components fitted (minus the trigger mech cuz im lazy). 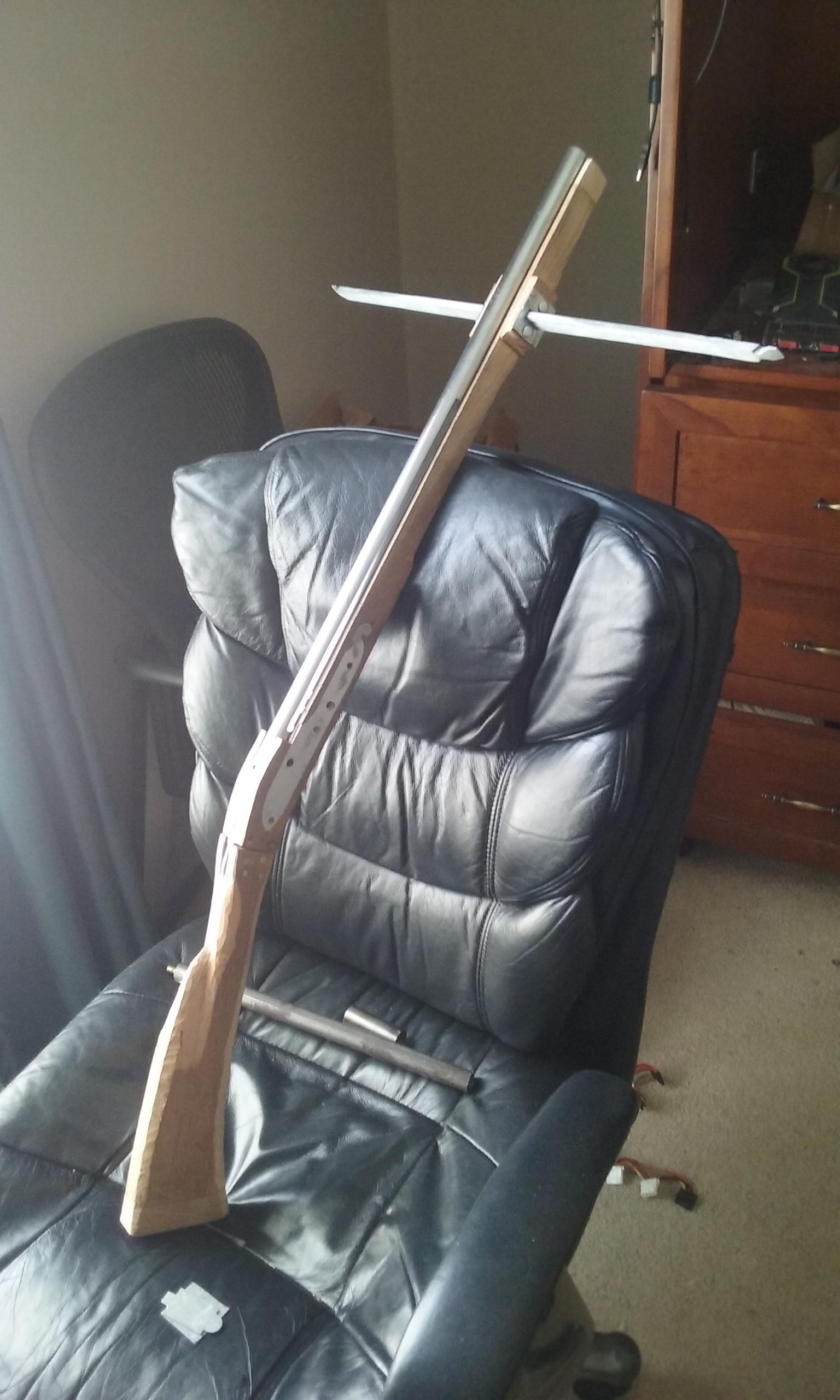 Im having trouble with the prod reinforcing plates up front there, and im not sure how effective theyll be at keeping the stresses of the prod controlled, i guess we will see.
Xamllew

I finally got to try a test fire yesterday after finishing a shuttle I made from a small section of PVC conduit. Even though I was using a splintered but still firm fiberglass prod and a string that was so long it couldnt be braced (not a great idea to use but i was too excited to care) it ran smooth, the shuttle slid back and latched onto the mechanism crisply, the trigger pull was long but surprisingly light and pleasant, the release was a bit loud and the prod vibrations were harsh, but the ball sailed successfully and dug into some cardboard boxes followed by the shuttle since the string was cut on the edge of the barrel slots. So aside from the mild vibration of the prod and the shuttle becoming a tumbling sabot I'd say the test was a success.

Here is the shuttle I came up with. 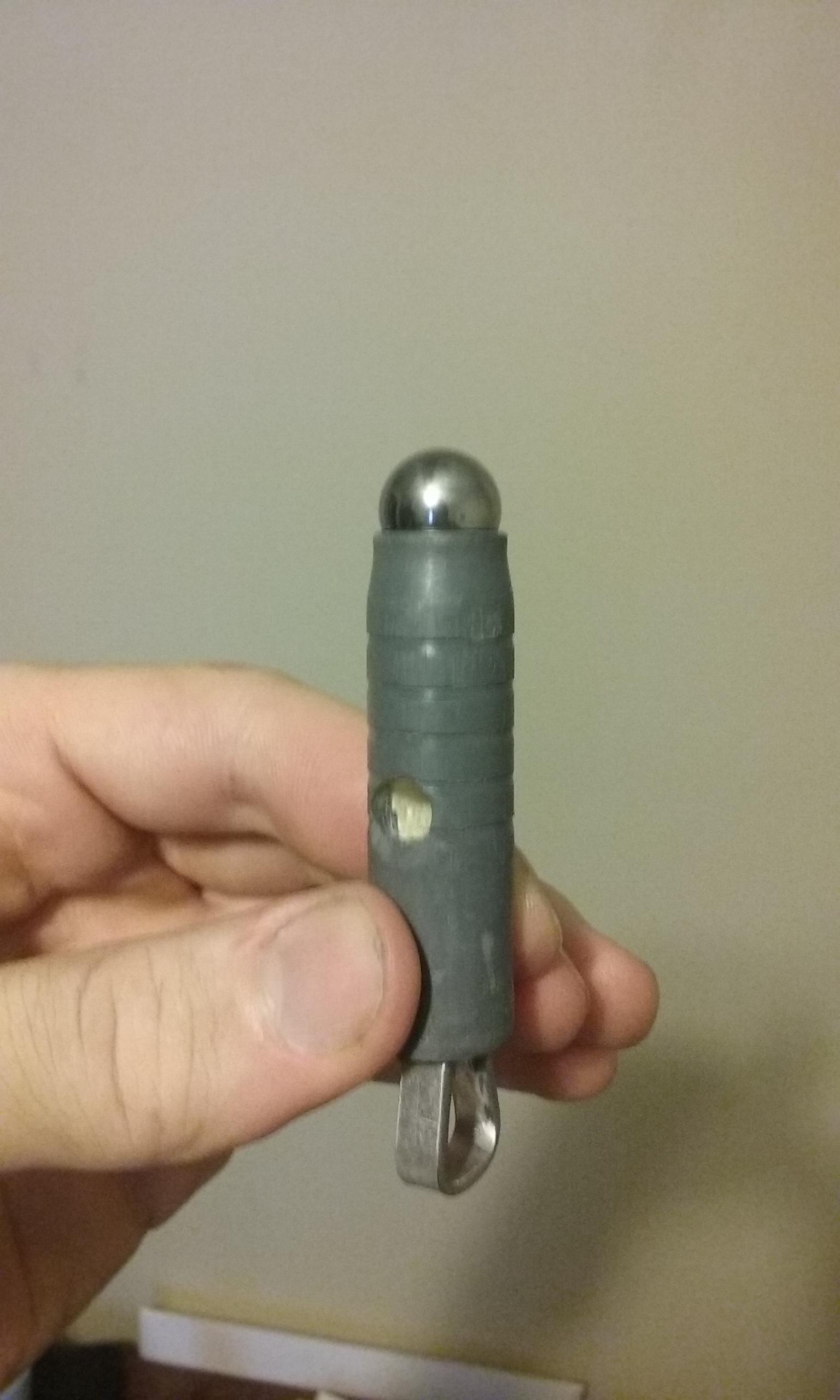 PVC conduit plugged with a wooden dowel, in the back is the steel catch fixed with a heap of epoxy, a magnet fixed in the front grabs and holds the ball in the seat. Weighs 23 grams loaded, so ironically, I may need to figure out how I can add more weight, haha.

I will have to wait for my new fiberglass bar to arrive before I can do more tests.
septua

Graceful shape and attractive inletting work. Keep it going, the fine tuning and debugging is part of the fun.  There is an advantage to mounting the magnet on the weapon itself if possible.

Your weight is OK, mine is at 21g and shot hundreds of ½” ball bearings (recovered). I switched my shuttles from delrin to lighter hm polyethylene because the delrin failed. IMHO target shooting and plinking require a more robust string due to frequent shots.
Xamllew

Septua, you were right on the money about the barrel slots not being long enough, the strings I've made for it have all been cut on the first shot because of how far forward from the brace distance the string and shuttle travels. Even if I set the brace to almost half the draw it still slices clean through the string.

Got my new trigger made, quite happy with it, sadly the buttplate was a total failure and will need to be remade. 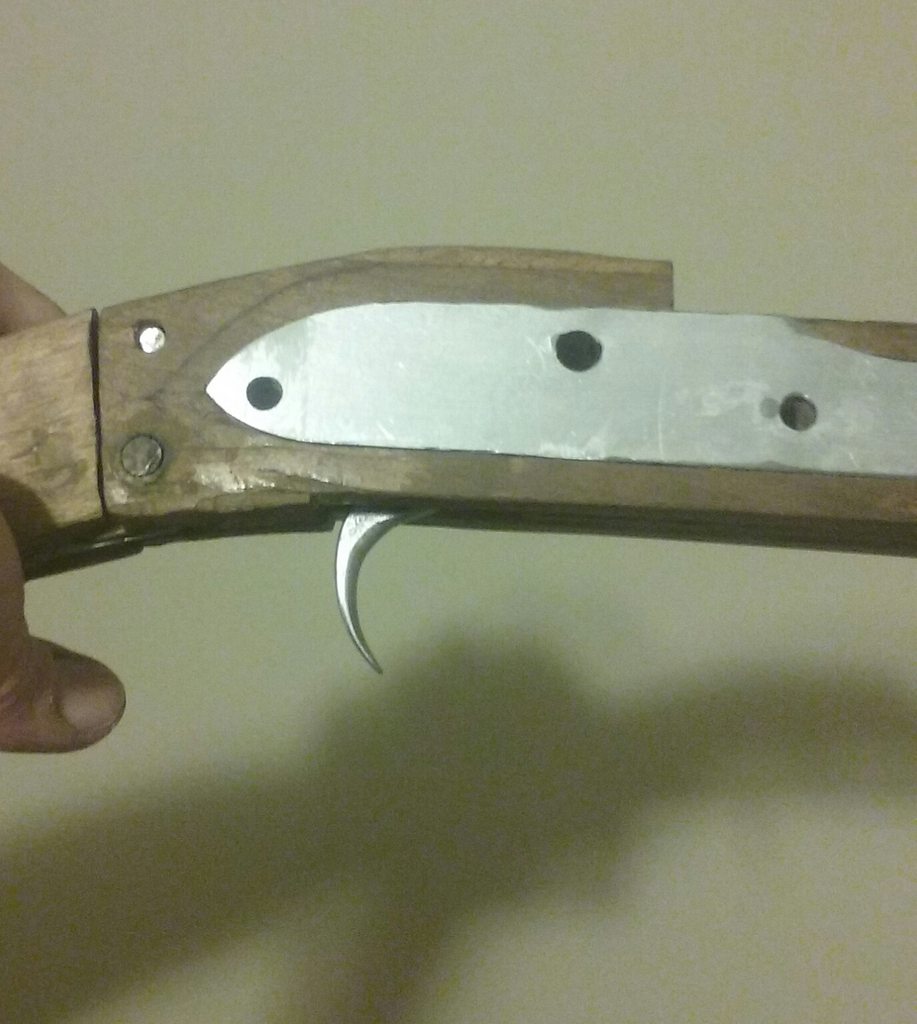 Thanks, yes, its mild steel, quite a pain to file out the curve. Still need to sand, temper, then polish it as chrome as i can go.
Sponsored content