Pardon this seemingly stupid question, but realize there is absolutely no one I am aware of in Northern Idaho who pursues this discipline.

Does anyone have a picture of the proper way to hold and shoot an early-style (straight tiller) arbalist? Tail under the arm and making calculated sighting as with a longbow? IF I am going to build one of these things, I need to understand how it is to fit the shooter. I am 6 ft. tall and from what I have gathered the tiller length should be 24-25 inches? Rethinking a 90-100# prod.
I have a nice piece of 2 1/2" wide curly maple left over from a trim off the blank of the last longrifle I built, but it gets a little thin toward the tail (up and down). From what I can see it really shouldn't make much difference?

See, and read thoroughly, Geezer's most excellent writings and much more at: http://www.crossbows.net/documents.php

And forget about possible recoil being an issue when it comes to crossbows. Robin Allen used to refer to 'fore-coil' as an alternative suggestion.

Hey guys: Geezer here. Tinker asked about the proper way to hold a medieval arbalest. The good news is: there IS no proper way. Medieval crossbows range from little pistol bows to big siege bows, but generally, there are four sizes. First, you have the short 'carbine' bows of the 16th century. These are generally about 24-25 inches long and were mostly shot 'free-hand' That's held with the butt alongside the cheek, braced right at the very tail with the 'trigger' hand. Remember, on most medieval bows, the foresight is the point of your bolt. For long-range shooting, the free-hand shooter maintains a constant aim over the point, while lowering the butt of the stock to the necessary elevation. And of course, recoil isn't much of a problem anyway... at least not until you get to Really Powerful bows.
Next come the 'field bows', like the Maximilian I and Louis XII bows in the Kunsthistorisches Museum in Vienna. (looks like most of the crossbows in the museum at Malta are the same size) These are about 30 inches long. These are sporting or military bows you might carry into the field as a personal weapon. A 30 inch stock is short enough to hold free-hand, or you can rest the butt either atop or beneath the shoulder, depending on the range.
Then there are large military bows... they're generally about 36-40 inches long, still 'field' bows, but pretty large and a bit unwieldy. Those are probably too large to shoot freehand, so should be braced atop or beneath the shoulder.
Last come the siege bows, some approaching 6 feet in length and similar width. Siege bows are too big and heavy to shoot from the shoulder. You'd want to brace them on a pivot, or at least put 'em on a wall or something.
So having said that, I'll admit I mostly shoot with the narrow butt of my favorite target bow atop my collar-bone (clavicle) and against the trapezius-muscle. There's a nice little pocket that lets me brace the bow securely, yet carry it high enough that I don't have trouble getting my eye down to the top of the stock.
There you have it: According to me, there's no right way to hold a medieval crossbows, though there are better and worse ways. And yeah, medieval crossbow butts are often quite narrow. You have plenty of wood to make a stock... or add some more to the bottom, put some fancy inlay along the joint and call it a feature. That's a lotta fun too. So what are you waiting for? Get to it. Geezer
Tinker

VERY HELPFUL. I am still trying to understand why the bloody "trigger" is so long...that is why I was envisioning a lower hold, sorta beside the chest. Seems like the trigger lever would be in the way with the tiller on top of the shoulder

I was thinking of bonding a 3/8" strip of cocobala or something like it for contrast with the fiddleback maple and grooving it for the bolt. That should give me some more tail thickness as well.
BTW: When I use wrong words please feel free to correct me. Thanks; I'm trying

Why is the trigger so long? First: With a strong bow, there's a fair amount of load on the trigger. Longer triggers get more leverage.
Second: The crossbow stock grew out of shooting the handbow. You hold a handbow out in front and draw back the string to nose or ear, or whatever. The crossbow stock works the same and the trigger releases from the same point. So given a freehand stance that's based on shooting a longbow, a trigger that releases at the butt of the stock makes good sense. Once the long trigger gets to be traditional, it takes a while to change it. The beautiful crossbow at the top of this page has a 4 or 5 axle lock. That gorgeous bronze thingy on the bottom isn't the trigger. It's a trigger-guard. The actual trigger is a little folding tang that's hidden on the underside of the stock, about half the guard's length back. Even so, it took a long time for bowyers to entirely abandon the old tickler-trigger guard and go for something simpler, if less elegant. Geezer
Ivo

When I first shot the medieval style crossbow...actually when it shot all by itself for the reasons described by Geezer

I learned to be very careful about handling these things since there is usually a manual or no safety on them. There are some important moments to keep in mind and guys have pretty much listed them, so I can only agree with them and post a few videos from youtube in support of their statements.

I liek that guys channel so much I'll post a few more of his videos as I'm certain they will come in handy.

Aiming(well one of the ways at least

Tinker wrote:
BTW: When I use wrong words please feel free to correct me. Thanks; I'm trying

Well.... Y'all gone and done it now; Sunday I took the rock maple chunk and made a stock out of it

Side profile is not yet devised.

'Tinker' asked about hemp cord for binding in bows. Most hemp twine on the market comes from east Europe. There are a number of purveyors of hemp twine or rope online. A quick search under hemp twine or hemp products should give several choices. What you want is very heavy twine or very thin rope, on the order of 3 to 5 mm diameter. If you can get it in a waxed/polished cord or twine, that's a bonus. Geezer.
Tinker

Already did that Geezer, but 2mm seemed rather on the smallish order?!
Geezer

Tinker: 2 mm hemp will work fine, you'll just want to use a bit more. The medieval bows I have seen generally seem to use 4-5 mm cord, fixed with some sort of waterproof glop... maybe wax or tallow or pitch.
I have often used thinner stuff for binding, depending on what I could get. Right now, I have some 4 mm that pleases me greatly. For a fairly light bow, you can get by with surprisingly little cord, if the stuff is strong, but for a more authentic look, don't be afraid to lay in a big ol' hank of cord. I generally use 25-30 feet of the 4 mm stuff for binding in a prod, plus another 12 feet or so for the stirrup. Basically the cord bundle is limited by the size of the hole through the stock. I make my bridle-holes 3/4 inch diameter, then flatten out the front of the passage and round it off. Some medieval bows do it that way, while others just use a round hole and smooth out the forward surface. I have found a 'D' shaped hole, with the flat forward lets me stack the cord a bit tighter, which in turn keeps the binding from working loose with shooting. Indeed, laying down the binding cord very tight and careful pays big dividends in getting a bound prod to stay tight. Geezer
Scott

Just to say I found this thread, and the links, very helpful....I was about to ask the same question!

Here's how I feel most comfortable shooting my medieval. 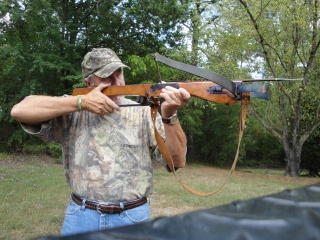 After re-reading this thread and watching the how to shoot video I was checking how I hold the bow and squeeze the trigger. Do a dry run as it were. I made one interesting observation: I was holding the crossbow loosely (like a hand bow) and it was rotating in my hand when I squeezed the trigger.
So in this regard it may be more like a rifle than a bow in that the crossbow should be held firmly, but not so tightly that the crossbow it torqued. and the trigger given a steady, smooth squeeze.

Something Something Dark Side
Moon

I struggled a little with

vertical shoulder movement and making sure my cheek pressure on the top of the crossbow was consistent from shot to shot. Once I gained some consistency, my high and low misses were minimized.
Between 20 and 25 yards, my arrow is dropping 1.5 inches for each yard change in distance so knowing the exact distance is crucial for hunting.
Lightly

Would you mind if I put that photo of you and the maximilian on my Flickr page? I love to have photos of folks WITH the bows that I made...
If not, no worries!

What is not being considered in these posts is the "length of the arrow". The person in the videos appears to be using an arrow about 20" long and it is obvious that this effects the total sighting plane, inasmuch as the further away the "front sight" (arrow point) is from the "back sight" (arrow clip or thumb knuckle) the less the barrel has to be elevated in order to see it in reference to the "gap".
Fire away guys and let's have some more input to this valuable discussion about effectively aiming and shooting a med.
Pavise
Moon

Please let me know by pm if necessary, which prod draw weight and Alchem # you used on my crossbow.
Thanks!
Geezer

I was reading Howard Blackmore's Hunting Weapons over the holidays and have since tried shooting the crossbow rested against the cheek instead of in the shoulder as described in the book. It is a lot easier to shoot this way, more accurate.
mac

Holding the tiller against the cheek is definitely the way! If you put your thumb against the underside of your cheekbone, it will help you maintain a consistent geometry, as well as cushioning your cheek from the recoil.

I tried it for a while and never really liked it but Mac's idea of using the thumb as a buffer sounds decent. might have to try that just too see.