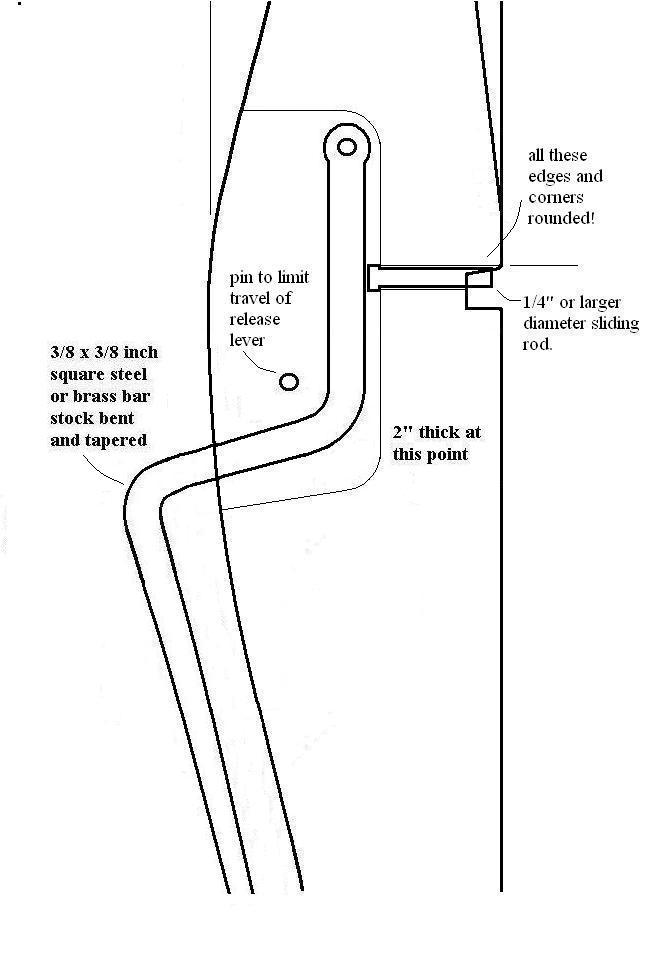 I wanted to make the crossbow the shape of a rifle so I was going to instead of a tickler make a trigger. So would just getting rid of the long lever and replacing it with a trigger work? Any plans, ideas or suggestions are welcomed and would be very much appreciated.
septua

A clap lock style with a sloped notch to bear the string tension will allow a conventional finger trigger pull and retain your desired stock profile. The clapper will insure against dangerous misfires. My trigger lock of that type is case enclosed and waiting for installation.
banuvatt

I don't think I have the tools to make it. If making a notch lock mechanism with a trigger instead of a tickler is not a viable option then I will probably make a roller nut instead. The clap lock seems kind of complicated to make.
septua

Slobows (lives 8 miles from me) offers a claplock set, but uses a lever type trigger. You are correct about this style being tricky, for one thing the slope of the notch has to be snuck up on slowly by testing.
c sitas

Just shot in the dark here guys. ALWAYS, sneak up on a new trigger setup. You'll have your fingers much longer. The heavier the weight the more careful to be , before you trust it.It's just like a gun , you only make one mistake.
Gnome

banuvatt wrote:I don't think I have the tools to make it. If making a notch lock mechanism with a trigger instead of a tickler is not a viable option then I will probably make a roller nut instead. The clap lock seems kind of complicated to make.

Hey Banuvatt, The first crossbow I built had a rifle-like profile and rolling nut with a trigger type release... and it didn't work well at all! Turns out there's a reason for the long lever of a tickler. All the energy of the drawn bow is bound up in the lock mechanism, whether it's a notch or a nut, and releasing it can be a chore without some decent mechanical advantage. I've since rebuilt that mechanism to satisfaction, and copied the design a few more times, so now I have a trigger-like release design that works with a roller nut... but simple it ain't. There's a toggle lever between the trigger lever and the sear surface of the nut, essentially breaking the long lever of a tickler into two smaller levers, both with advantage, that imparts a smooth but quite long trigger pull.
By far the best non-modern trigger-type release design is the Han Dynasty Chinese mechanism, it has a short, crisp, reliable pull. Unfortunately it is also slightly complicated. In short, I doubt there is a good design choice that is both trigger and simple. If I were in your shoes, I'd just modify a tickler design to fit well with the shape of a rifle stock like tiller. I know that can work, because I've gone that route, too.
Regards,
Gnome
banuvatt