This was the initial plan I came up with for my first complete build, designed around Alchem's 200ish pound prod. A few things changed along the way during construction, but I stuck pretty religiously with their plans for the business end. My goal is medieval military utility, throwing short, heavy bolts, but I wanted a more modern grip, trigger and shoulder stock.

And this is an updated detail of the trigger/lock mech.

I cut the stock from a solid chunk of walnut. I had planned on a contrasting wood for the track, and this became a necessity when I discovered the walnut to be a bit splintery and soft in the track area. So the insert was much thicker than I had originally planned, but this had the added benefit of making cutting the cavity for the trigger much more straightforward. I originally thought I would use some exotic and spectacular hardwood, but I had a stick of oak from Lowe's just the right size on my workbench so there you have it. I like the contrast, and I know I have a strong glue joint, but I sunk a couple of hidden screws into each end just to be safe. I drilled the socket for the nut all the way through and carved a couple of oak inserts to glue in later, once I had fitted the nut. One is in place in this photo.

Here's most of the bits I fabricated, also one of 6 prototype bolts I built. It's 1/2" oak dowel, 1/2" aluminum tube, and 1/2" steel rod, and weighs about 2.2 ounces. I think it's pretty good considering I don't have tools to make them properly, I'm proud of them but it's doubtful I'll make any more since I found out I can get 1/2" quarrel points from Richard Head Longbows for $1.76 each. 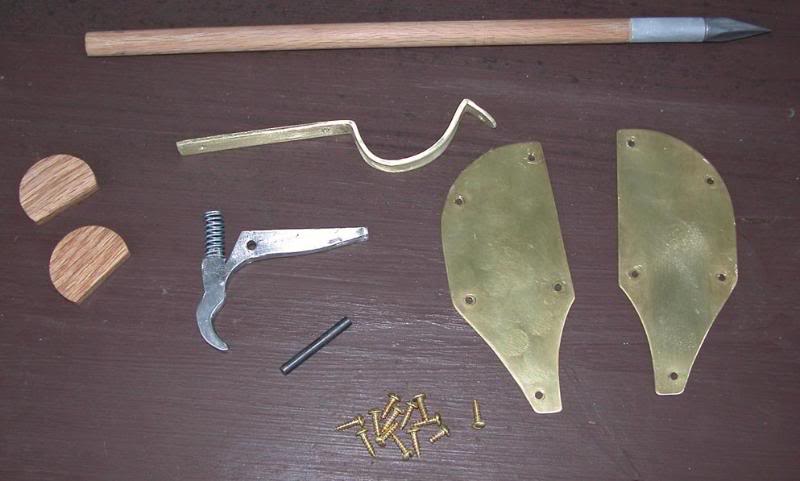 I ordered a couple of Derlin nut blanks from Alchem, but in the meantime found I could get my own 1.5" Derlin rod from Amazon, and did so. I also got a slab of 1" UHMW for future experiments, as well as UHMW adhesive tape. I cut a couple of blanks and got carving with my dremel and files. It was the first time I worked with this plastic and I'm pleased with the results so far, though installing the steel sear reinforcement was a bear. I cut the slot for it with an abrasive wheel in the dremel, then cut a utility knife blade to the same circular shape as the cut, with slightly roughed side edges for grip, then carefully and gingerly pounded the crap out of it with a big hammer until it was seated properly and I couldn't pull it out. That derlin is tough stuff. 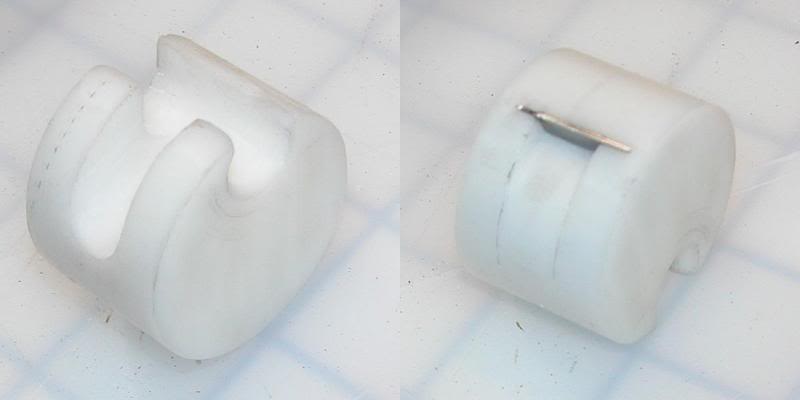 Finally, here's a shot of the completed lock area. The wood finish is just linseed oil and beeswax. I've left the track groove very shallow so that I can fine tune that once the prod is installed and I can see how deep it should be based on the position of the string. The tongue is also not in it's final shape, I'm sure. 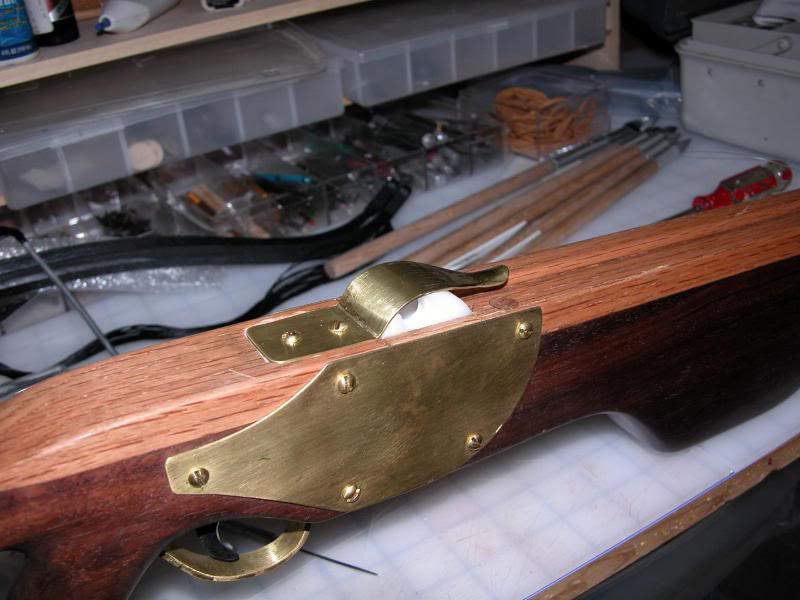 That's about as far as I can go until I have the prod and irons in my hands, and probably further than I should have gone. In the meantime I'm thinking about what kind of sights I'd like to install, and also thinking of making a bench spanning device out of a scissor-type car jack.

Your attention to detail on the stock is wonderful could your share photos of the complete crossbow?

I'm currently gathering materials for my first build, have some nice maple and even a piece of laminated beam as stock possibles and a nice piece of cherry to make the bolt rail out of. Think I'll build my own trigger assemly and prod, However I have wondered about the recurve limbs from a take downbow. I sure do think I like the wood laminate prod idea.

Did my first build using 2 maple boards (1x4s) and glueing them up after inletting. Makes

it easier to get the relations between trigger and nut etc. Either drill for a crosspin for accurate alignment or marks for reclamping. Once everything fits and functions then glue the halves together. Makes it a lot easier especially with simple tools. Using a router (carefully) makes the job faster still. Like the laminated prod idea. Lighter with enough

snap. Got that in the back of my head - laminated bow loaded with a cranequin.

Build all my hunting gear light as around here you walk way more than you shoot.

Here is a link to my build.

If you have any questions I would happy to answer them.

Todd, having been interested in blackpowder sometime back I was just looking at some of my leftover parts the other day such as some set triggers butt plate and trigger gaurds with those thoughts of use in the build believe me I was blown out of the water and totally enjoyed your build!

YOU ARE AN INSPIRATION ! Fear not I don't intend to copy you.however you are an inspiration. I'm still rounding up materials, rolling around trigger assembly ideas, looks as if it might take a couple of different builds to scratch this itch. Thanks Todd

Thanks for the kind words, this was not my first build. I did start with the simpler medieval styles first.

To encourage you , you should know I do not have a fancy shop with exotic tools. My tools are basically a bench top joiner, drill press, router, bench grinder, and the usual hand tools.

Thanks, my shop is about the same. Those 4" angle grinders sure are handy along with my table saw and bench model drill press. The maple stock possiblity is actually a rough stock blank for a muzzle loader. I'll take photos of the build when I get started. A little effort and enginuity can go along without the fancy stuff .........I believe you just put more of ones soul into it.

Thanks for the encouraging words, not to be a pest but I may have questions later.

Two years and a half dozen or so crossbows later, I finally got around to making a better trigger for my first build. 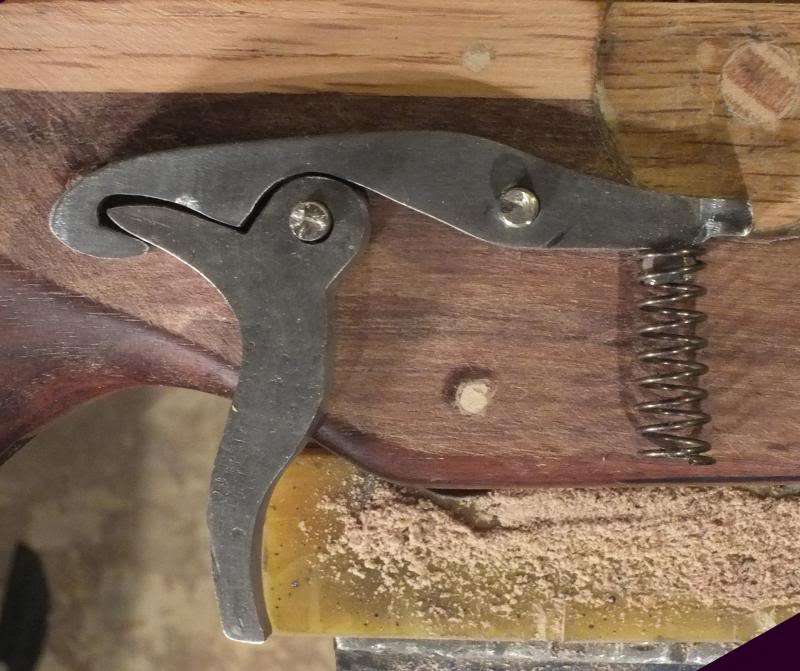 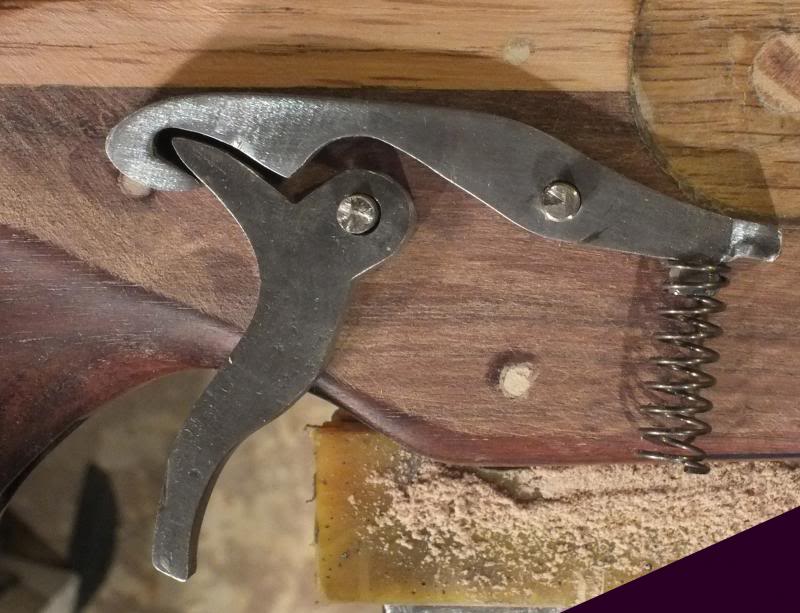 These photos were taken at a rough stage, I've since polished and case hardened and blued these bits and done some test firing, and it works beautifully! A very long trigger pull, but very smooth and easy. Since I took this step I did some other upgrades to the old girl and it is practically a new build, much nicer now, perhaps my best shooter. I'll post more when I get it all together.
Gnome
Todd the archer

Love the new trigger! Long and easy pull is nice.

This is the spare solution I  plan using, to replace the set trigger. Less fancy but very efficient.
Gnome 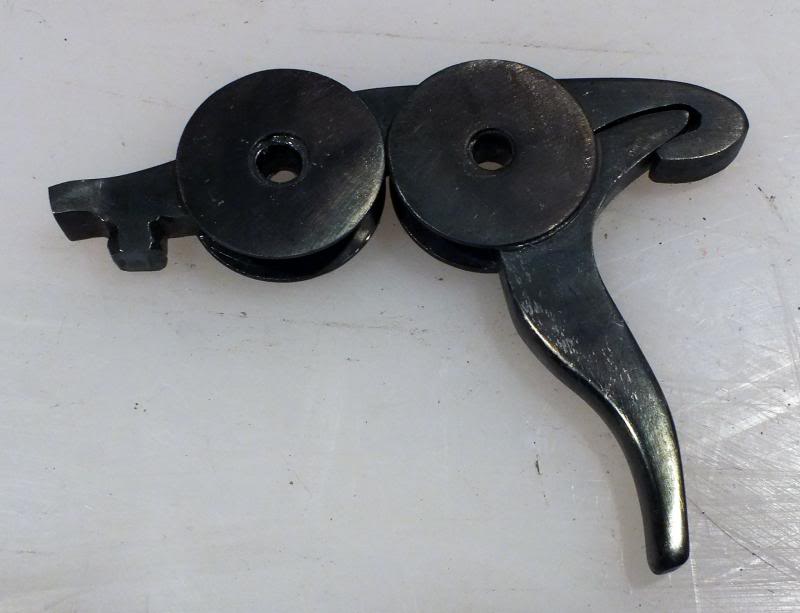 The disks that look like washers are just that. This build is the only one I've done so far out of a solid piece of wood, rather than two halves, and being my first attempt I was pretty sloppy drilling and carving out the cavity for the trigger. Hence there is a lot of play in there. With the original trigger I just placed a washer on either side to get it lined up, but that was fiddly to do. I contemplated a number of solutions and settled on the simplest, which was the washers, but for the updated mech I soldered the washers on. 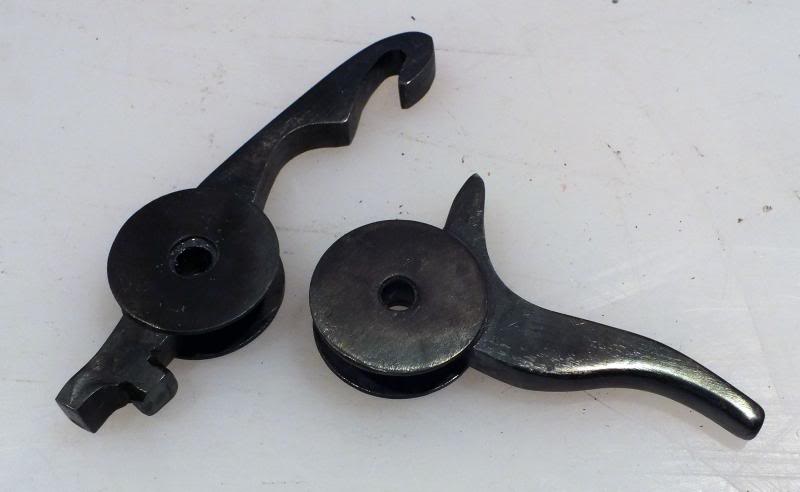 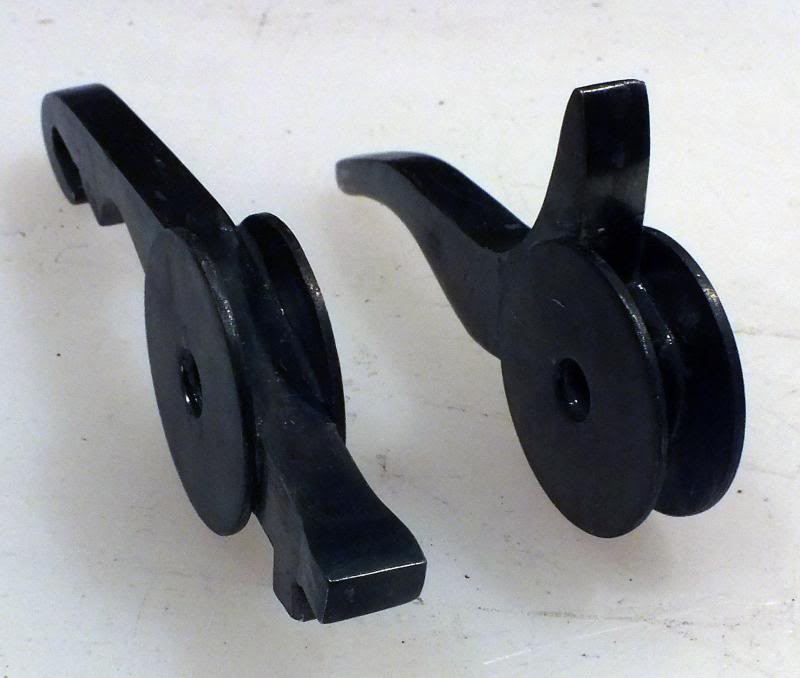 I've finished the other upgrades and gotten everything back together in working order, haven't had time to take it out for testing or take any pictures yet. Improvements include a cream colored ABS nut to replace the white Delrin original, a brass bolt track insert and refining the shape of the bolt track to reduce friction, wood "cheeks" to reinforce the lock area and refined shape on the brass lockplates, and removing quite a bit of wood from one face of the shoulder stock to give it a degree of cast-off.
Gnome
Gnome 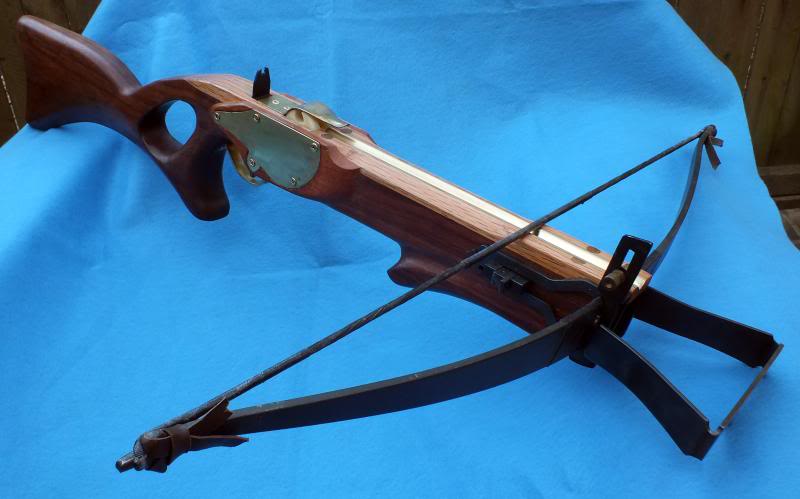 When I took this apart to start reworking the mech I noticed that the holes for the trigger axle had become elongated and misshappen with use. The wood there was too soft and too thin-walled to take the pressure. I went with the easiest, though perhaps not most elegant solution and thickened up the lock area of the stock and used subsequently longer pins for the axles for more bearing surface. I didn't have any walnut handy, and I tried oak first and it didn't look very good, so added a third wood type to this stock, Brazilian cherry.

THe blocky fore-grip area was refined quite a bit, feels much more natural now. Plus, removing the material up front helped keep the balance point from moving any farther forward due to the material I shaved off the shoulder stock. 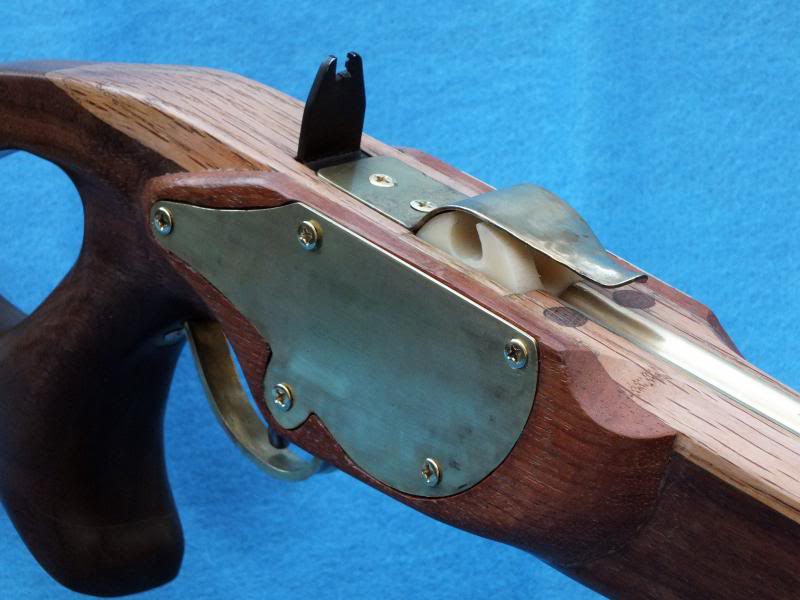 I modified the shape of the lock plates, if I ever get around to setting up an acid etching kit I will probably replace them completely with thicker brass plates with decorative etching. I also replaced the standard, dome-top screws with flat-head philips screws that I modified a bit, rounding off and polishing the tops. I liked the vintage look of the slot-head screws, but they were a pain to to actually place and remove, the screwdriver skipping off and scratching up the brass and wood got annoying. The brass track was a pretty easy install since my bolt groove was already a 90 degree V shape, I just had to sand and scape it out deeper to accept the brass angle. I dispensed with any nails or pins this time, but roughed up the underside of the brass thoroughly and epoxied it in place. The new cream-colored ABS roller nut was the only real frustration on this rebuild- I couldn't get the sear plate faced and angled quite right for some reason, but I finally got it working. 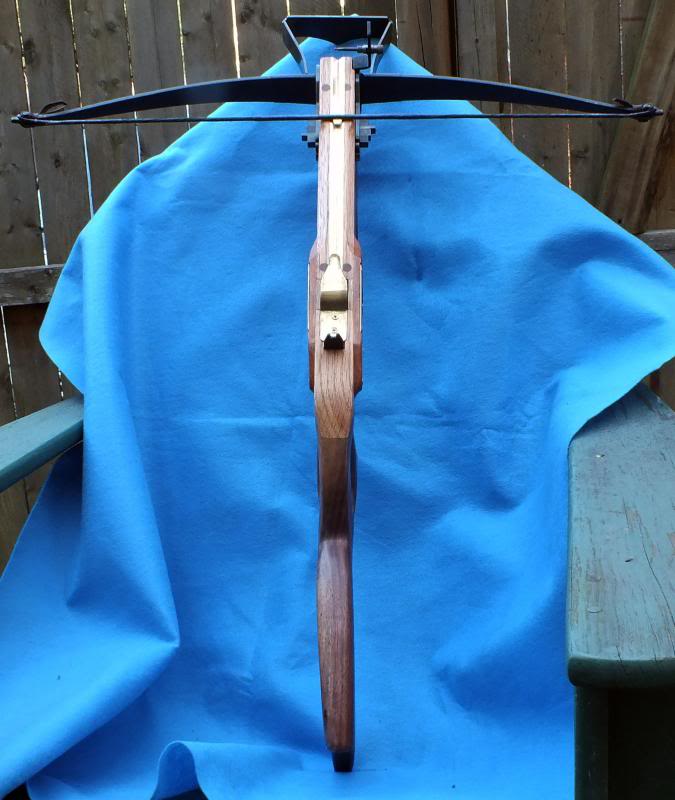 I removed quite a bit of wood from the left side of the shoulder stock to give some cast-off, it shoulders much more comfortably now though still not quite as nice as some of my other builds.
Gnome
jeep

Gnome , this crossbow is gorgeous, and the new trigger is a lot better.
MRobin

Not a fan of those delrin nuts, but I understand it saves tedious metal work.
Gnome

Thanks, guys. It's been a labor of love, that's for sure. It's a sweet shooter now. MRobin, plastic certainly is easier to work than steel! But it's also lighter and more efficient for a bow that doesn't require the strength of metal. One of these days I'll build a weapon with a prod worthy of a steel roller nut, just so I can say I did it once and can speak with some authority on the matter!
Gnome
Sponsored content