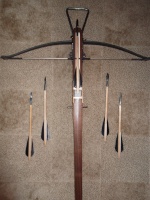 I can't hardly figure these computers out and lost my text that accompanies this picture. Geezer made this for me after the bow used in the "William Tell" Television series from the 1950's. I reccomend the work from this master bow maker.
Geezer

Why: I think it looks magnificent. Musta been made by a genius!
Geezer.
Basilisk120

Wow that look quite unique. An interesting piece to have made.

Not having seen the show, (at least not more than a couple of minutes at best) does the foot stirrup swing down to use?

Something Something Dark Side
olrono

Yes the foot stirrup does "swing down" to use. This was the program that "started" the crossbow fad in the 50's and every kid wanted one, now I have mine exactly like "Tell's" only more authentic! This guy realy knows his stuff!
Gnome

I like that baby quite a bit! I was thinking of a stirrup like that for my next project, one that could swing down and maybe even lock into place to be used as a bipod of sorts.
olrono

I don't want to break the rules but will someone please "transfer" this spot corectly for me?

This is the show, and the music that had all the kids going "wild" over crossbows. Read the comments. "Conquer or Die!"

I had no idea there was a show about Tell from that era. Kind of a craze, like the coonskin cap from that other show?

The clip was very funny. He doesn't even bother to aim, but snap shoots the apple of his son's head. I bet he had more than one kid.

Also funny that the guard dirctly next to the kid wasn't worried, either.
olrono

you didn't mention "seeing the string that holds the bolt" that guided it to the apple? It's almost as "funny" as seeing a bunch of grown-ups dressed up in mediavel chothes pretending to kill each other.

Remember it was television... OH yeah, before this program I had a "coon sikn cap!"
Michael

That is one beautiful weapon? How does it shoot and what is the draw wt. Dave does know his crossbows the man is a true craftsman. Are you using a goats foot to span. Myself I use both on mine. Goats foot and or a spanning rope. Enjoy your new toy? By the way I do remember the William Tell TV. Show. Enjoy Mike.
olrono

Thanks Mike, yes I am enjoying my new bow! Geezer really made a good one after just watching the DVD of some episodes he knew how to make this one. It is a stave rated at 170 lbs. drawn at only 6 inches. I wanted it to look like Tell's which had a really short draw length, this gave me a nice shooter I am not afraid to bust all my bolts up with just target practising with. Glad you remember the show! "United We Cry - Conquer Or Die!"
Michael

Olrono: Do you make your own crossbow bolts? Here are a couple of places that I deal with. For the wooden shifts Hardwood. I go to Cinncinnati Wooden Dowel Co at cinncinnatidowel.com or call at (888)369-3571. Secert if you use ash for your shafts you must call; ash is not on web site. High quality stuff. The rest of materials I do business with 3rivers archery at 3riversarchery.com. There again everything one needs all in one location. Take care and putt'em down range. Mike
stoneagebowyer

Anyone know why the stirrup folded down on the TV show crossbow? It's actually pretty cool looking. Kind of reminds me of the Rifleman's tricked out Winchester '92, which had a oversized cocking loop and was modified for rapid fire.
Geezer

The stirrup on the William Tell TV bow folds down out of the way (or flops up in the way, depending on circumstance) I see no real advantage to having it do so, but if you hang the stirrup on a rivet, like they did in the show, that's what happens. It was an interesting project anyway, and didn't strain credibility too much.
As for 'ol' Mucus Mc Cain, The Rifleman. The Winchester 92 carbine featured in that show had the optional large-loop cocking lever. Those were mostly intended for cold-weather use where people wore heavy gloves or mittens. But the tricky little firing-lever set up so Mucus could slam-fire like a pump shotgun was special. In retrospect, I kinda wonder why they didn't opt for the Cold Lightning pump-action rifle.... probably didn't know about it.
stoneagebowyer

I am harzarding a guess that the Winchester is such an iconic rifle, they couldn't consider any other type of long gun for that show. The 1950s was the heyday of the cinema and TV western, after all. My favorite recurring line was the kid shouting "Pa! Pa!" anytime there was danger.

Great job you did on that replica crossbow. The prop department would be the only ones to truly know why they did the stirrup that way. I opt for coolness.
olrono

When the stirrup is sticking streight out it's a little "heaveyer" than when folded down, or it could be when the prop guys made it it just got lose and the star "Conrad Philips" Tell, just moved it out the way? Durring this whole seriers that was the only time he is shown "spanning" his bow in this beggining segment.
Sponsored content