What kind of target?

What kind of target?

I tried a few make shift targets but these bolts blow right through at 45 feet. Really tired of tearing up the fletches. Any direction would be helpful. Thanks

My SCA group uses the Morrel Yellow Jacket Targets. They have held up surprisingly well to constant use and stop my bolts very well.

But for a improvised target. I used a cardboard box filled with rags and old t-shirts. Works really well.

Something Something Dark Side
stoneagebowyer

Jds, I am helping to build a year round outdoor archery range at my club. We have settled on the Morrel Bone Collector bag targets. They are rated for use with crossbows, so that should be a good long-term bag target solution. I think they cost a bit under 200 dollars. But essentiallly all those bag targets are just bags filled with lots of rags of some sort of fiber material. You can even tack some chicken wire to both sides of a wooden frame and fill the void with rags you can get at thrift stores.
jds6

Thanks guys for the insight and info. I will check all this out. Maybe now I will save the fletching on my bolts! Thanks once again.

Since I just moved I had a bunch of boxes, which I cut into 2x3' pads and taped them together into a bale about 8" thick. I put a carpet remnant over that, for good measure, and it held up surprisingly well, I only recently had to flip it over to a fresh zone because it got too perforated and the bolts were starting to make their way all the way through. I'm thinking about trying to score a bunch of carpet remnants, cut them to a uniform size and stack them up in a box and see how well that works. Probably not for a while, though, as I still have a lot of moving boxes to shred!
jds6

Gnome, that's sounds like a good idea to me. What is the draw weight of your bow, and what kind of bolts do you use?

I've got two bows right now, one a 200ish# steel prod lobbing 12 inch long, half inch thick bolts weighing between 1.6 and 2.2 ounces. The lighter bolts are tipped with Richard Head quarrel points, the heavies are my own quarrel points. My other bow is a 150" fiberglass prod shooting carbon fiber bolts that are about 16" overall, 3/8" diameter with Richard Head 3/8" bullet points. The 3/8" bolts weigh in at 1.6 ounces, and they sink just as deep as the heavies- must be due to the smaller diameter and the higher velocity of the fiberglass prod.
Ivo

I have had this crazy idea for a long time nad am so anxious to try it...if only i had the time.

You guys know those cube targets made up of thin foam sheets?

Black is the most advanced archery target ever made

Archery Targets have always
touted a combination of easy arrow removal and long target life. It was
these attributes that first put BLOCK

on the target map.

The quest for a better BLOCK

The two substrates used to make a
four-sided BLOCK

are polyurethane and polyethylene. Polyurethane is
what is on the outside of the target. It is formed by combining two
chemicals that, when mixed, expand dramatically. Polyethylene is a
petroleum based product that comes
in the form of small beads that are
melted and, with the introduction of a blowing agent, are transformed
into the target’s inner layers of Friction Foam

Managing these internal layers in the
manufacturing process has always been a challenge and has necessitated
the use of banding and planks of wood to assure compression. Compounding
this issue is the fact that polyethylene and polyurethane do not mix
well. This is where
PolyFusion

eliminates the need for both the wood and
banding for compression. This, in turn, eliminates the product
blemishing that was being caused
by the bands.

Eliminating the wood and banding also
means eliminating weight from the target. This is important both for
the smaller targets that bowhunters like to carry with them and the
larger targets that tend to be moved around in the backyard.

It wasn’t until this BLOCK

target
was performance tested that the residual benefits of PolyFusion

became
apparent. Amazingly, this lighter weight target, that solved so many
manufacturing problems, also performed better than any previous BLOCK

Fusing the internal layers to the
inner target wall results in more uniform layer compression which, in
turn, means easier arrow removal. The fact that arrow removal is easier
than any previous BLOCK

also results in longer
target life. Because the layers are fused in place, they hold their
position. Arrows find their way between layers. Previously, when an
arrow hit a layer head-on, the layer would buckle. This resulted in
layer damage that reduced target life.

Once again, it is the magnitude of
the improvement that is so remarkable. Performance testing verified that
the BLOCK

Well, I found a very similar material for cheap.

~ *Above ground pool liner* It comes in huge rolls which yield enough foam to stack five or more of those cubes...or a few range grade monster cubes.

The tech is really simple too.

You cut the roll into 1-1.5 foot wide strips, then cut those into squares/rectangles. Stack them up till you have about a foot/foot &1/2.

Then make a template out of wood wich will be used to compress the stacked foam block and by which it will be trimmed wit ha hot wire cutter. This trimming will not only even out the block surfaces, but also heat weld all teh separate sheets of foam together ~ which is really cool and I will explain it in a bit. 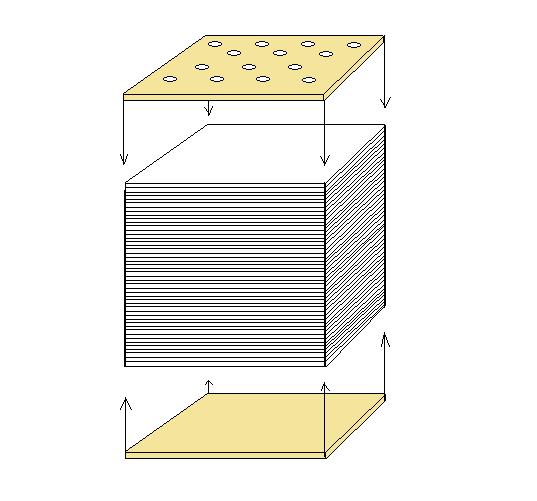 So yeh, heat welding. Once the outer surfaces are sealed, the block is pretty much solid, but internally it's still composed of separate sheets tha aren't locked together in any way and will expand once the clamps are released...sooo that's where the holes in the top template come into play. They are there to allow you to take a heated rod and stick through the target - this will weld the block internals together and lock in the compression we're after.

Once this is all done and the templates are removed - take a piece of tick rope(about the diameter of the holes in the block) about 10" long, and cover the ends with hot glue. Stick 'em in the block and add some more glue around the edge of teh hole to help keep the joint solid. ~ Now it has a carry handle.

I'm talking all theory here, but I had a target exactly like this a while back and it was great and light to carry around/throw in the back of the car. Lol, I have had the illustration ready and sitting on my computer for god knows how long, as I was planning to do a tutorial on it...unfortunately I'm always stuck at work. Anyway, just another example of a target to for you guys to think about...hope it helps.

What a great idea, you could also have the ability to make the target bigger than most block targets on the market. What would you face the target with, or would you need to. It seems that if you do not face it with something the bolts would break the welds between the sheets. Just a thought.

Bugged my neighbor at 5AM today to take a few pics of the target (mine is somewhere in the woods), so I hope his suffering is appreciated here.

What would you face the target with, or would you need to. It seems that
if you do not face it with something the bolts would break the welds
between the sheets. Just a thought.

All I can say is - nothing is forever, even diamonds (I buy a box of diamond burs every month

)...I'll admit, it is a light target in a sense of *for light power bows* and I wouldn't shoot a broadhead through it.

But the tech is interesting and that's pretty much why I'm chining in. Since you're asking, there is a bit on it in the article I posted earlier. The fuzed surface plays a double role here -

a. helps lock in the compression;

b. helps distribute the force of impact onto the material surrounding the zone of impact. - assuming this makes the arrow seek the path of least resistance, ie. between the layers.

also results in longer
target life. Because the layers are fused in place, they hold their
position. Arrows find their way between layers. Previously, when an
arrow hit a layer head-on, the layer would buckle. This resulted in
layer damage that reduced target life.

Once again, it is the magnitude of
the improvement that is so remarkable. Performance testing verified that
the BLOCK

And as you might know, when the arrow penetrates something, it first
punctures a small hole with the field tip and as the shaft is driving
deeper the hole stretches and friction kicks in - stopping the arrow.
When you pull the arrow out - the hole shrinks again due to the locked
in compression the specifics of the material that is *foam*

. There are cooler, more expensive block targets out
there, but I thought it would be nice to explore the tech with you guys.

On the side note, I also really like bag targets. Those Yellow Jacket bags are just wicked...heard folks shot 400fps bows at them and they took it like champs over and over. Ago old tarp bag filled with old rags and cellophane bags...who would have thought...huh?

I tried a few make shift targets but these bolts blow right through at 45 feet. Really tired of tearing up the fletches. Any direction would be helpful. Thanks

I wrote a page to our wiki describing my various attempts to make good backstops:

So far the best material has been the soft, yellow plastic foam described in the article. Please add your own inventions and/or ideas to the article also.
Geezer

I recommend polyethelyne foam: called 'ethafoam' comes in different 'weights' The stuff stops bolts like crazy and lasts a long time IF you keep it out of direct sunlight. So when you finish shooting, throw a tarp over it. It's that easy. Geezer.
jds6

Thanks guys for all the info. Haven't tried any yet, but as soon as work slows down I'm sure to give some a try.