Hi I'm from deepest darkest Derbyshire and have just become the owner of a replica 15th Century tournament crossbow and am itching to use it correctly. I hope to find lots of advice and ideas I can use here on this forum. Many thanks in advance.
John
Ivo

Welcome to the forum!

Got any pictures of your new bow?

I do have one but not sure how to get it into the reply, I'll have a little play.

Well that didn't work - I'll check to see if there is a 'sticky' or some such thing telling you how to do it.

Will come back later.

Well I've read the instructions and to be very honest about the whole thing I' none the wiser. Talk about being totally inept when it comes to things computerish........ . I need to ask a teenager or my grandson. Will keep on thinking unless some one can tell me in very simple language what I have got to do to post images.

No worries, got you covered.

Exactly why I did a tutorial video on it a while back.

You just upload an image from your computer with the appropriate button and then copy/paste the generated image code into your message where you want the image to appear...video takes care of where and how. Good luck. 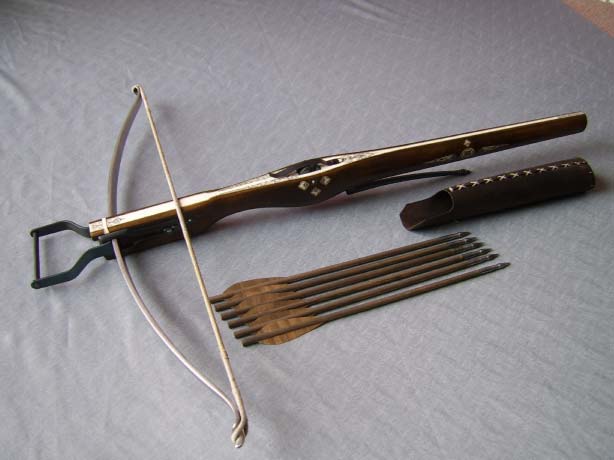 Wow it looks like I managed to upload a photograph of my first (bought) crossbow. Many thanks for the video link.

That's a handsome looking crossbow. Who made it? I think we would all be pleased to see some details of the decorative work, if you can bring yourself to do battle again with the image hosting software.

Thank you for the compliment - I don't deserve it. All the credit must go to the folk at Replica Crossbows, I believe it is one gentleman with an unpronounceable Polish name (well I couldn't pronounce it, I daresay he has no problems at all!)

Rather than try to upload again here is a link to their site it has lots of photographs of the products.

John, that's a very handsome crossbow, similar to some in the Kunsthistorisches Museum in Vienna. I'm sure you'll have hours of satisfaction shooting it. Geezer
stoneagebowyer

I think my post vanished when Geezer hit his send button. A very handsome weapon indeed. I hope you can post some observations on how it performs on the range.

Yes, I'll admit it. I have a specially designed posting program that deletes others' posts. Clever devil, aren't I?
Geezer
stoneagebowyer

You are pure evil, Mr. Watson

John, btw, I have been trying (still without luck thus far) to find information on medieval crossbow competitions, such as they held in the days of city crossbow guilds in differnet parts of Europe, and still being held in Italy. The targets are pretty facinating, and look to be small cross sections of logs with an addtional even smaller log or sapling that juts out of the center of the main round.

I just recieved a book by Jans Sensfelder, Crossbows in the Royal Netherlands Army Museum. He discusses such companies or guilds of crossbowmen, and states that at one tournament in Munich, where the targets were between 121mm and 181mm (4.76" to 7.12"), at a distance of 115 to 126 paces. That is some shooting! Another German competition in the 1400s had 12" targets to begin with, and they became smaller as shooters were eliminated, and were placed 110 to 135 paces.

Pretty amazing, I think. How much fun would it be to have such an event today? I am workiing on having one at my shooting club, perhaps even this October.

I would really enjoy watching / taking part in such a competition. I'm finding it difficult to find clubs etc that will even accept crossbows in their premises such is the attitude towards them. But persevere I will it's early days yet.
The more I read the various articles on this site the more I want to have a go at making my own bow.

John, I highly recommend you contact http://www.englishwarbowsociety.com/. They have to face much the same issues as crossbow shooters, not being able to shoot at clubs because of the power of the bows and prejudices against them, etc. I imagine you will find like minded, cool people who would help you find a friendly shooting facility near you, too.

http://www.primitivearcher.com/smf/index.php/topic,7943.0.html is a link to the Primitive Archery and Atlatl Society. Again, in England, and they seem a fine bunch. They too may help you.

I took my bow to a local supplier and was met with "Oh we don't like to let steel prod bows use the range they are too prone to breaking and can be dangerous."

How true is this? Have I bought a bow that can't be used on a regular basis? Or was he trying however gently towards purchasing a modern bow?

Thanks for your thoughts.

John: Geezer here concerning steel bows. I have been making crossbows for over thirty years, that's hundreds of crossbows, and perhaps a third of those have got steel prods. To this day I don't know of ANY steel bows that have broken on my bows. We have bent a lot of aluminum-alloy bows and broken a few, (though none with any injury beyond a nicked finger that required a bandaid) but NONE in steel.
Does that mean steel prods can't break? Certainly not, and I have heard a rumor of at least one home-made heavy steel prod at a European meet that broke with disastrous results. I get all my steel prods from two professional sources: Alchem and Darkwood. You might ask them direct about breakage... As I recall, Jim Koch at Alchem once told me that had some problems in his first few years of manufacture, so maybe they broke a few.
In my personal experience, a properly made steel prod is no more likely to break than fiberglass or wood, and less likely than aluminum. If you put a leather 'sicher' strap down the back of your steel prod, you can reduce the risk of catastrophic failure to close to zero.
On the other hand, I can say the prejudice against crossbows, particularly in English speaking countries is widespread. I run into it all the time... just part of the job.
Geezer.
Nice John

Geezer: Many thanks for taking the time to put my mind at rest - I will look into adding a sicher down the prod.

I think it is pure nonsense from this fellow. Wooden bows are far more likely to break, but injuries are very rare even then with wood splinter flying everywhere. I would say a shattered carbon arrow is much more dangerous than any catastrophic bow failure in any material. Keep looking for friendly ranges, John, and do contact the two organizations I linked to find like minded people who may help you find a good venue.
Sponsored content