» Troubleshooting
by stuckinthemud1 Today at 9:13 am

Hi all,
I've done a couple of these top trigger bows (see below) for SCA archers. They're simple, and so far, seem to be robust and trouble free, and the downside compared to other triggers, isn't enough to cause problems with their intended use.
Here's my question does anyone know of any historical examples of a trigger like this? A client asked the question, and I'm not off the top of my head aware of one, but I know I don't know more than I do.
Thanks, any help appreciated,
Frode 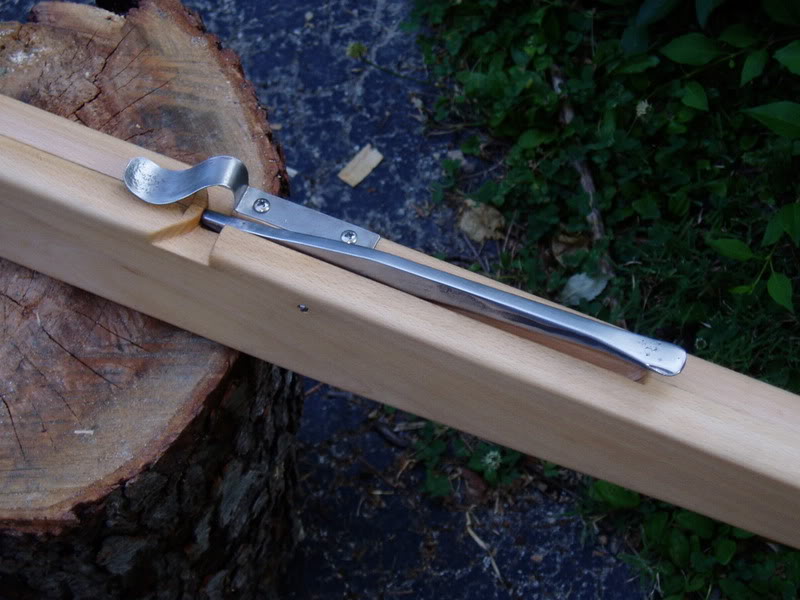 None documented that I know of.
This one also seems not overly complicated: But its not a real over the top...

Rolynd can you post pictures of the complete bow? Looks very interesting.

I saw some pictures of some primitive Asian crossbows, maybe Hmong or Vietnamese. Some were on line, some in National Geographic. I'll see if I can back track enough to give this assertion some credibility.
Geezer

Top triggers as illustrated above have two problems: They're in the line of sight, and they produce a limited amount of leverage. For lightweight recreational bows, they are cheap and generally trouble-free in exchange for greater string-wear and a slight loss of efficiency as compared to locks that don't 'slap' the bolt.
As for historical documentation: Egon Harmuth's "Die Armbrust" has illustrations of top-trigger notch-locks for East Asia, and I have run into one illustration (very small) possibly in Harmuth... but I don't recall off the top of my head (which is why there's so little hair)... what was I saying? Oh yeah, I've seen a small period (Italian?) illustration of a crossbow that had no apparent trigger on the bottom, but a device on the top that might be either a catch or release-lever.
You will find the top-lever release clearly illustrated in the Osprey Men at Arms books, in their color plates. Trouble is, you can't really trust their color plates. When they're reproducing illustrations from the period under discussion, you're on solid ground, but when they get 'round to those lovely color plates in the back, you're at the mercy of their artists. They had a guy named Mc Bride, who could draw like nobody's business, but he always got the crossbows wrong in some important detail. So don't put too much credence in secondary or tertiary sources. Nuff sed. Geezer
Sponsored content