Hello i'am new to this awesome forum. Can anyone explain to me how the trigger on the SCM Twinbow functions. Any and all help will be greatly appreciated.
Ivo

Do you want to see just the basic principle on which that trigger operates or a more in depth view of all the parts cycling in that exact trigger. I can have the first one sketched out and animated in a jiffy, but the second might take some time.

In Twinbow I reckon, the chain link kinks the other way...just don't have the time to draw it out(lots of quirky parts)

Well that's all the time I have now, folks...welcome to ask questions/break it down further/etc.

...honestly I'm starting to get tired of people asking stuff and then silence.

PS: Merging this topic with the Twinbow's original topic later on.

I believe that chain is more correctly referred to as a toggle action. It was used anciently in wine presses, trap mechanisms and in the action of the Luger pistol.
I am intrigued about this trigger and thinking about how to apply to a ballista.
traxxas_slash7

Thank you Ivo for the quick response:D. your cad animations are great. I am building a crossbow and was debating between this trigger and the type of trigger used on excaliburs, tenpoints, and scorpyds but with the addition of a transitional lever, for a lower trigger pull. Now that i have seen how well this trigger functions i will be using it in my crossbow build. It will have a 300 pound draw weight and a 32 inch draw length for a good ballistic efficiency. It will be a bullpup powered by theraband Gold; Tell me what you Think. This trigger has so many beneifits over a traditional trigger no shear, great trigger pull weight, and nearly unlimited adjustability by using different spring rates and preloads.I have a few questions. How thick should the toggle action and trigger levers be if made from a good steel like 5160 carbon steel, does this trigger feel like a single stage trigger, and how are the toggle action links made. When i first saw this trigger i thought it would be great for a deadfall 8fingers.
Ivo

Project sounds wicked, 300# is a monster.

Don't
worry too much about the trigger...all of them are fine. One of our
guys built a 300 pounder using an Excal trigger(Excal, factory made that
is).

From my experience, triggers can be made from scrap,
really...it's the design of the component that gives it it's strength. I
would build that trigger out of cold rolled steel with the thinnest
pieces being in the 1/8" range and wouldn't have a worry in the world.
~ Crossbow AK style

- heavy and overbuilt with the thinnest axels being 3/16" or even
1/4" in diameter same for the thickness of the levers(it's not how
thick, but how much body you give them in the x,y axes). Trigger housing
I'd do somewhat thin...about 1/8" maybe, but over building it a bit
wouldn't hurt.

With good steel you can shave some of the weight
off by making toggle action bits a little thinner and maybe some other
parts too, but with parts being all different thicknesses you're still
going to be stuck with spacing things out, so stacking things from
matching thicknesses might make things easier.

Anyway this is all
speculation, like I said I'm no engineer and do lots of things by
feel...a traditionalist in me after all, huh?

The last trigger I built had a housing made from 16ga hot
rolled...holding a wight of a 120# prod like a champ...like I said, it's
the design, not the material.

Or even better...put the second lever on the lower axel of the toggle(so it slides right in between the links) and add a set screw to the trigger lever for adjustments. 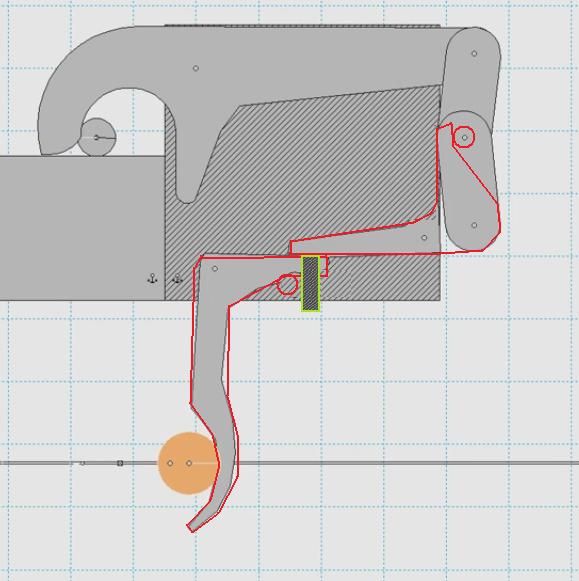 Biggest
issue I'm having at the moment is resetting this trigger. Something has
to push the knee past the center line and I have an *idea* of how SCM
did it and like it, but not exactly sure here about the *how* part...

To start...I'll have to take back what I said earlier about the knee bending left...

...it actually makes more sense bending in the opposite direction in sight of my recent pondering.

If
the parts making up the toggle action are not just links, if in fact
they possesses multiple functions and bend the other way, then that
would explain the weird shape of other components. 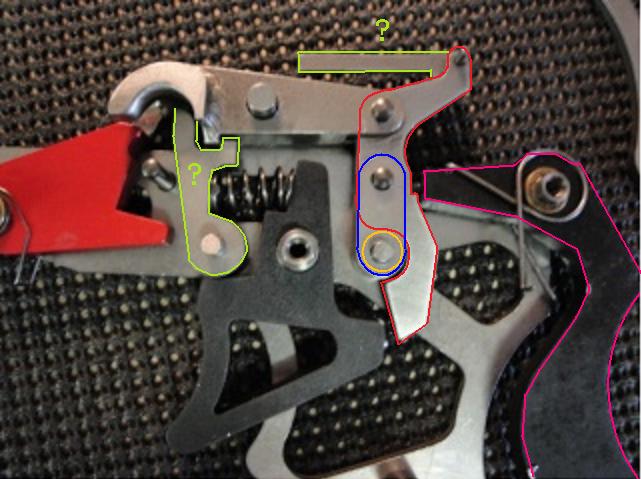 All that's left is to figure out what and how of the two Green components.

My
brain is wrecked after the day's work, so I'm not exactly in position
to start thinking about the function of the two green parts...all I can
reckon right now is the lever like part attached to the top toggle link
does all the resetting. Parting at this point, but I'll be back. Hope my
little MSPaint scribbles help a bit.

PS: 8fingers, thanks for the correction - it's indeed *toggle action* and I had blast wearing the hell out of that term in my rant above. Always feels goos to be around smart people...makes me feel smart.

Thanks Ivo for all your help. With each post this trigger becomes more interesting. "Or even better...put the second lever on the lower axel of the toggle(so it slides right in between the links) and add a set screw to the trigger lever for adjustments." That's a great idea

. If i understand correctly it would work in a similar way to the adjustable preload on rc shock bodies. If the toggle action does bend left when fired it looks like the green part behind the anti-dry fire may be what resets the toggle action when the string is pushed againts it.
Ivo

By shifting the axel we ultimately extend the lever and increase the mechanical advantage...while that would also increase the trigger travel (if left as is) this gives us more room for fine tuning the trigger pull with the set screw present - longer lever on one end basically means you have to swing it farther for the same travel on the other side. With that in mind, the set screw adjustments affect the system in same way - with a longer lever a greater range of adjustment is available.

By the way, found a topic talking about how a latch like this can be made. > https://thearbalistguild.forumotion.com/t482-bar-stock-trigger-and-nut#4275

And about resetting things...man, that thing has been haunting me.

...might need to go talk to Moon about that.

Trying to think up an easier way to handle it, using a push rod similar to this action > https://thearbalistguild.forumotion.com/t109p30-crossbow-triggers#4859

Toggle action trigger is very efficient ,stand any poundage and don't request any springs most of the Oss crossbow used this. 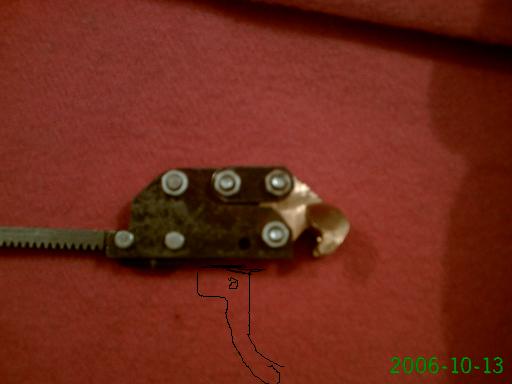 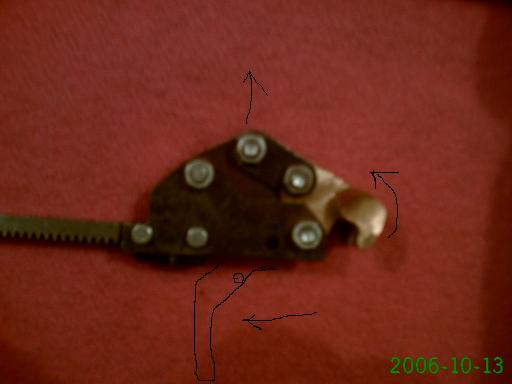 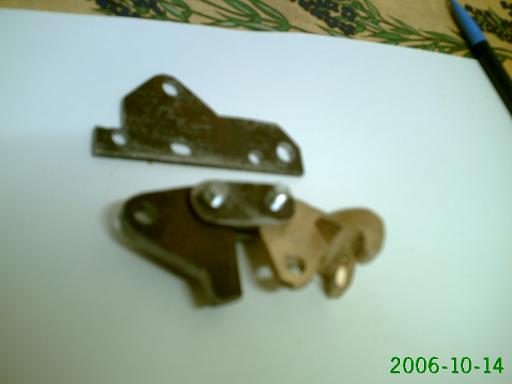 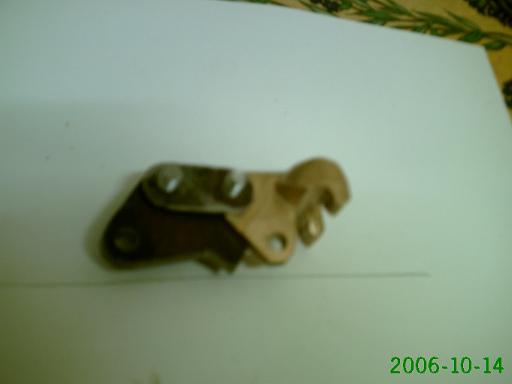 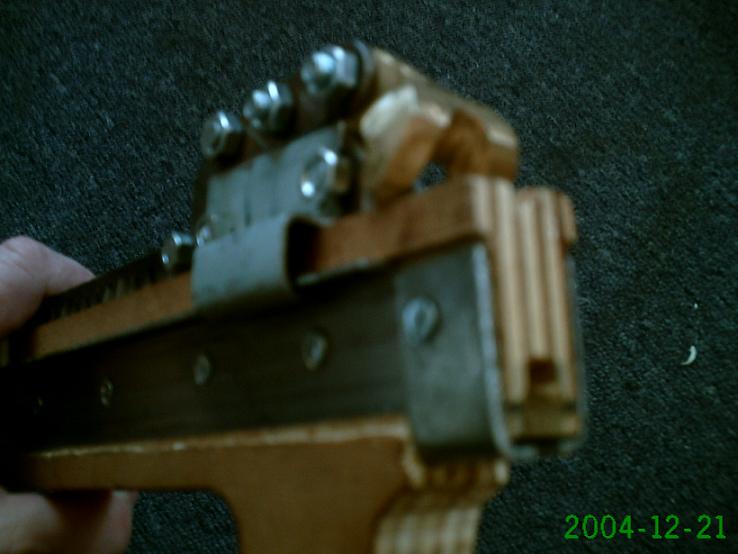 Ha! I almost forgot about that one, Jeep. True, it's definitely a good example...and actually sort of resembles the Luger pistol action in a way.


Toggle action trigger is very efficient ,stand any poundage and don't request any springs most of the Oss crossbow used this.

That wasw acrually going to be my question, but the way it looks is it uses the gravity/friction and simply falls into place on it's own. A really great design indeed.

Think this one should function similar to the OSS trigger with the gravity resetting the trigger. 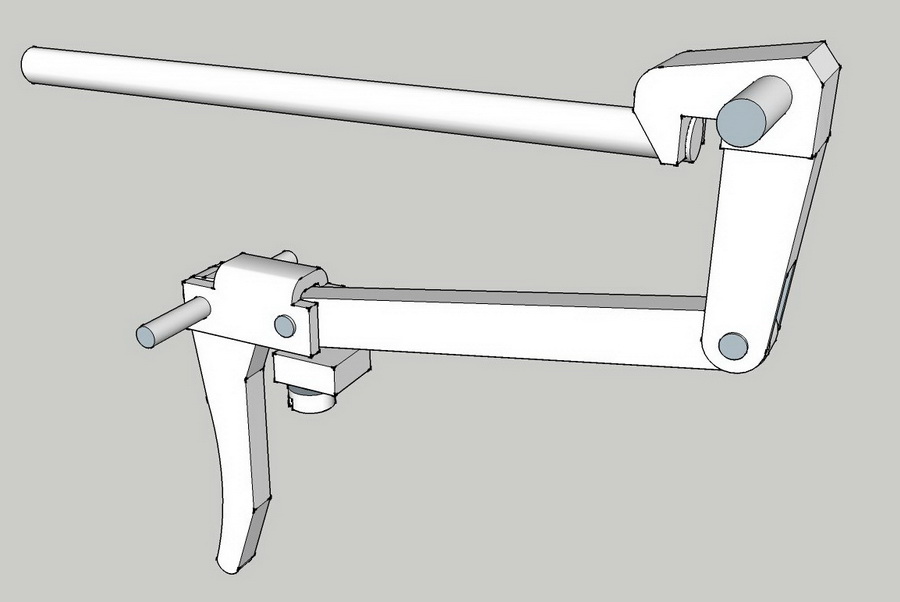 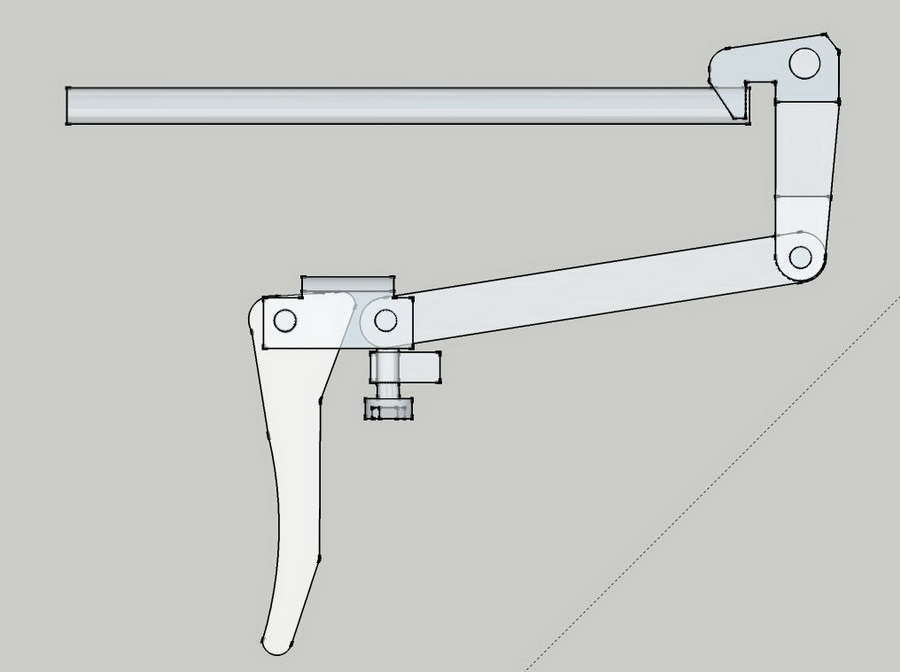 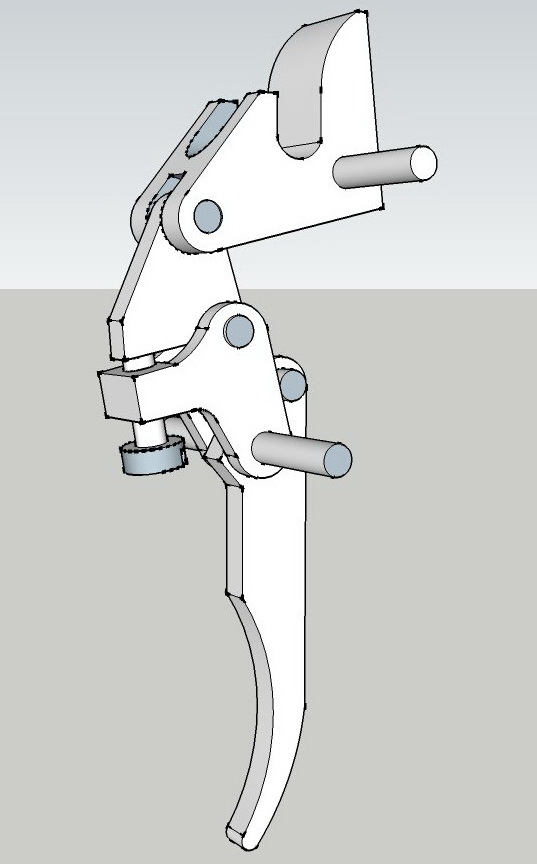 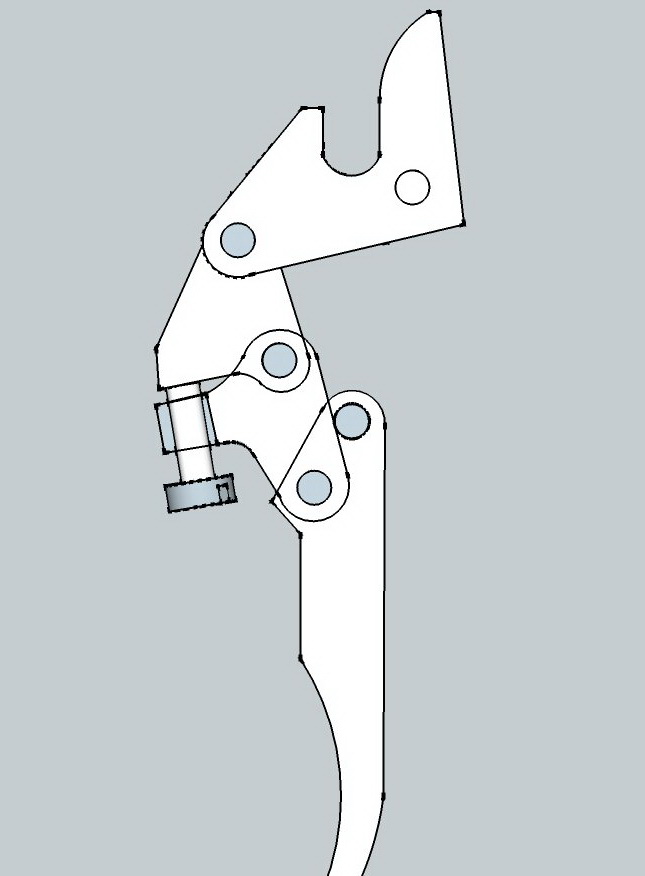 Pretty cool concept and as you can see - can be bent to your will in all kinds of ways.

. Any word yet how SCM resets the toggle action?
Ivo

Any word yet how SCM resets the toggle action?

I think I have it figured out.

Now just need to draw it out...(as always short on time, as always doing stuff in my head

Also wrote to Moon, hopefully he'll stop by to hang with us.

So yeh...spoke with Moon about all this stuff. Seems we're on the right track...

So get ready, because surprisingly I had much better luck with this design than with the 4X German trigger I'm working on.

Sorry, left the video running a bit too long there.

Took me about an hour to get it to work more or less properly...Working Model gives me an error, but even if I let it keep rolling things turn out fine (just real slow processing/rendering...haha, that toggle action is even screwing with the computer, so we're not alone here


If
the parts making up the toggle action are not just links, if in fact
they possesses multiple functions and bend the other way, then that
would explain the weird shape of other components.

So, those damn green components.

Took me a while, but I got them figured out. Gotta tell you - really a marvel, this trigger.

The top green bar had my mind running laps, the chain reaction I'm about to explain made it far from obvious. But then a quick guess is all it took. I popped in an extension spring between the green bar component and the red toggle segment (I think on the original trigger it's a torsion spring, but anyway...) the spring pulled the two parts together with the green bar resting on the back of the claw and the trigger reset instantly after release. 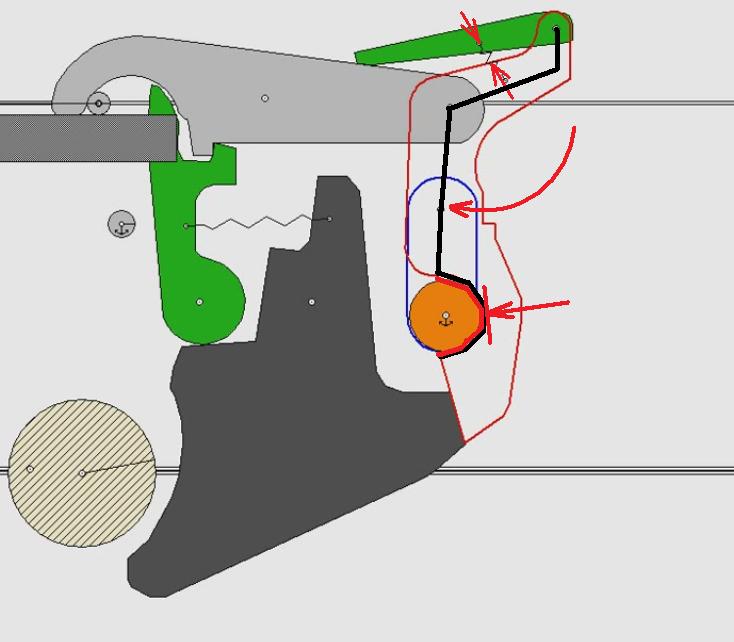 Since the trigger resets automatically, there is no way to load the crossbow again. Well...That's where the second greed component comes into play.

What it does is basically keep the claw from closing after release.

Ok, so...After the claw releases the string, the green component shifts forward (thanks to the compression spring between it and the trigger) andacts as a stop - preventing the claw from coming down. 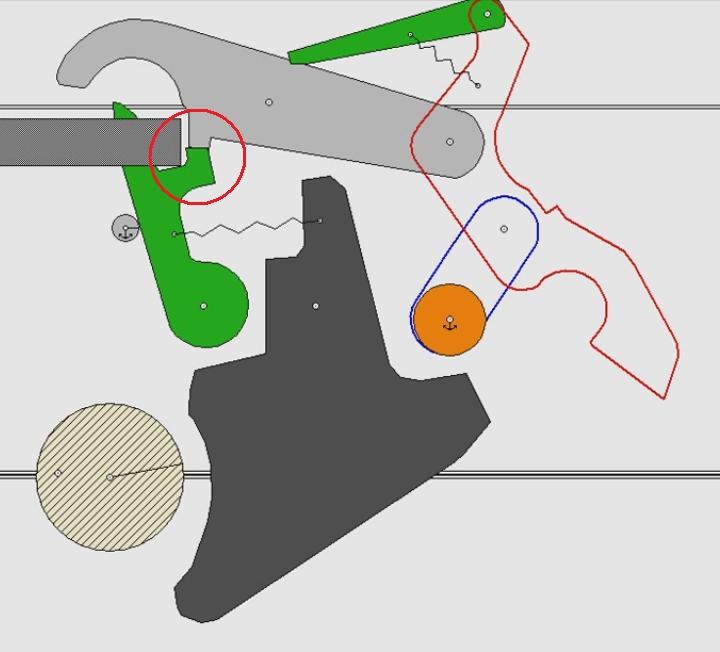 Now when the string is pulled back, it shifts the stop back, allowing the claw to drop and for the green bar to reset the toggle action.

An interesting bit in this trigger is the Orange spacer component that I drew in the diagram explaining the reset bar function, but didn't mention the spacer...well that spacer is what the red toggle segment rests against keeping the trigger locked. 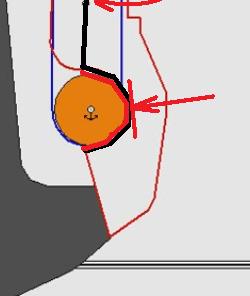 Thought I'd go into a bit more detail on that part in case it wasn't made clear in the video.

Also...Didn't add the grip safety in the video, but it's pretty obvious how that works.

Perhaps I'll draw that one up too. I'm really getting a kick out of this little mech testing app.

. This is definitely the most interesting trigger i have seen to date. Your diagrams and videos make this very easy to understand. Now all thats left to do is break out the machining tools

(busting my ass for you here

The build you have in mind is pretty crazy, so I thought I'd push it an extra inch to help out. Hope we can participate in the planning of the actual machine too, lots of cool little bits to discuss there....it's going to be a bull pup right?

Keep us posted and good luck!

Sorry I havent posted in a while. After roughly machining most of the trigger components out of some scrap 1/4 steel I decided I dont like the weight. I'll be ordering some 1/4 7075 t6 tempered aluminum, that should make for a strong yet light weight trigger. does anyone have any recommendations on bearing size for the trigger components to turn on?
Sponsored content

» Has anyone tried a Twinbow?
» swiss twinbow limbs
» Twinbow 2 plus extras for sale
» Compound twinbow pistol (posts vs pulleys)
» New Member in Atlanta