I remember seeing, years ago in some book of weapons, photos of an all metal folding assassin's crossbow with a range of maybe 20 ft. IIRC it was carried loaded, but with the prod folded back. The butt was a longish screw with a sort of large wingnut, and as you spun the wingnut the prod unfolded and was tensioned against the trigger nut.

Anybody seen such a critter, or am I having a Senior Moment here? All I could find on the 'Net was an all wood palm-sized folding 'bow.
Geezer

Geezer here: You aren't having a Senior Moment... or maybe I'm having one too. I have seen the folding Renaissance assassin's bow in a book, but long ago. So probably it was in George Stevens' "The Crossbow from 35 years with the Weapon" or Frank Bilson's Egregious book on Crossbows... I don't remember the title, but I do remember old Frank wanted to cover metal prods with layers of tape to protect against catastrophic failure. Anyhow, I do remember such a bow, and actually knew a guy years ago who made one. Yes, it worked... basically it's a tiny balista, made of steel, with twisted skein and stiff arms. But yeah, it was pretty neat.
So keep looking, it's out there somewhere. If I run into the pics, I'll note it here. Geezer
kenh

Whew! Glad to hear that if it was a Senior Moment that they are contagious

Hello: I'm having the same senior moment. The book Geezer is talking about is " Field and Target Archery". The book is very old book. I was reading that book 50 years ago. That crossbow was in there alright. Well good luck on your quest. Mike
chaz

Thanx Chaz. Ordered mine too.

Here's one I just came across while surfing; not the one I remember from the book, but similar. Sold at Christies in 2003 for $12,000 plus. Is that wing nut pulling back a sort of latchet mechanism? To give you a hint of the scale, the prod is 9.75" wide... 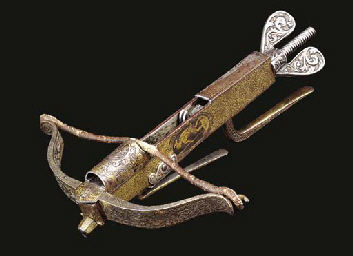 Seems somewhere I read that these were attributed to the de Medici family in Italy.
mac

The wing nut draws the entire lock mechanism back, carying the string with it, and thus spans the bow.

There is a folding "crossbow" in an article in an old issue of the Journal of the Archer Antiquaries. It is like a miniature ballista (as Geezer describes, above) I will try to find the article and scan it.

That's what I thought Mac. Thanks. If you can find that article, that would be great! I appreciate it.
mac

I am sorry for the quality of these images. They are scans of photocopies I made over twenty years ago. 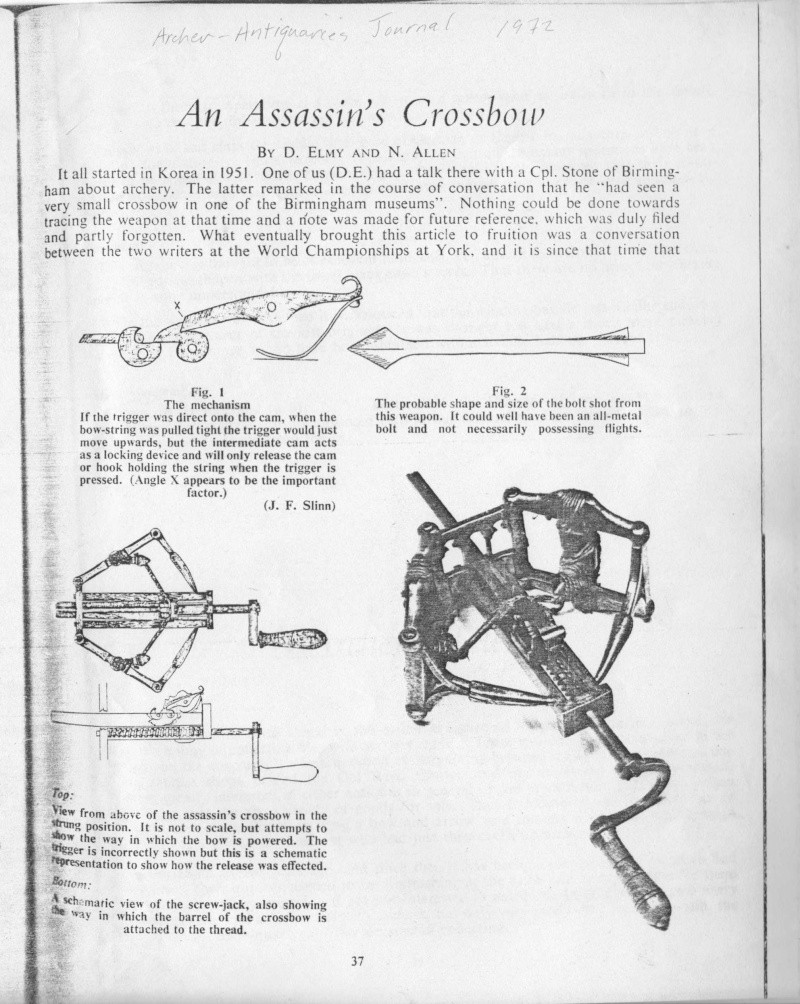 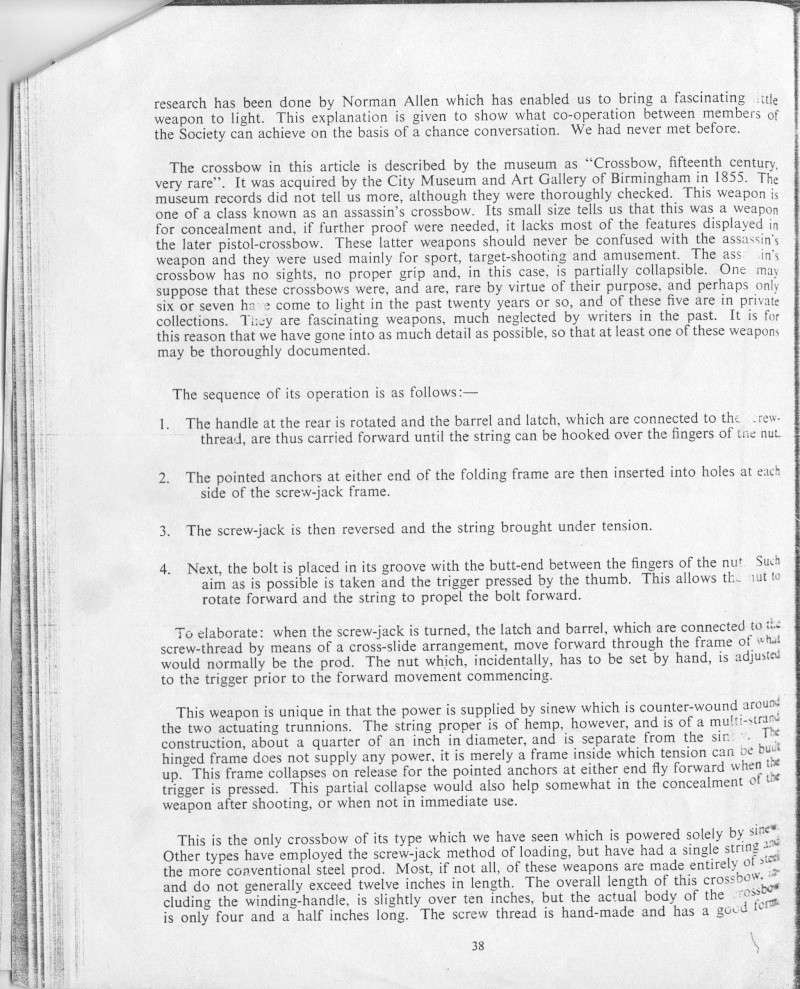 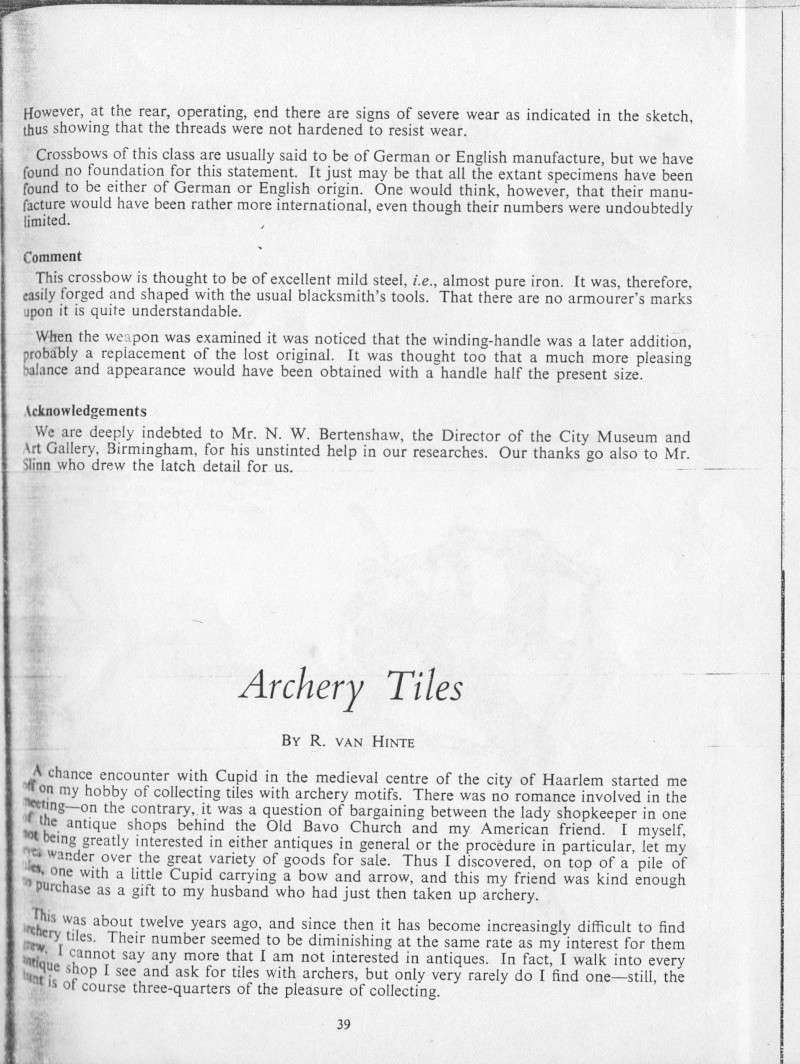 I am very reluctant to hazard even the roughest guess as to when this bow was built; save that it is probably post- medieval. It would be anywhere from the 16th to the 19th Century. My suspicions are that it is later, rather than earlier.

Whenever it is from, it is not long on ergonomics! It is not at all clear how you are supposed to hold the thing to shoot it, or what you are to grab it by when you turn the crank to span it.

I always had a sort of fondness for this bizarre little thing. With today's interest in "inswingers"; it is timely again.

The diagram of the trigger geometry is a bit suspect. The interaction between the trigger and the intermediate lever should be adjusted a bit. As it is, the trigger would be way too stiff.

Yup, that's the article I remember. There used to be an SCA guy called Kazimir... he made and sold medieval-style crossbows for a while... in fact, Kaz was my first real competition in the medieval-crossbow trade. As I recall, Kaz actually built one of these. I saw it... he assured me it worked, though I never actually saw it in action.
Geezer.
kenh

Thanks Mac! I'll get a magnifying glass on my 'good eye' and check it out in detail.

Ah yes, Kazimir: like lots of self-employed artisans, he was reasonably good at his craft and getting better day by day, but a really lousy businessman. Eventually he quit selling bows and just made a few for his own satisfaction. Since then there have been a couple of others with similar problems... the guy in Denton Texas made good stuff, but he got caught out with only one prod supplier, and no stock. Too bad, he would have fit in with this group just fine. Geezer
mac

So, the more I look at that folding-mini-balista, the more I like it. I would sort of like to build one, but the information in the pics of the article is just not sufficient. Does anyone out there live withing easy reach of Birmingham? Perhaps they would be kind enough to take some pics.....?

My suspicion is that the authors are wrong in asserting the frame would fold as a result of the recoil. I imagine that when it is properly skeined up and strung, the folding frame members have to be forced against the pre-tension in order to get the braces to go into their notches in the "tiller". It seems like someone with one of those wiz-bang computer modeling programs could test this out without actually building the weapon. (Any takers?)