I noticed there is some interest towards Finnish crossbows on this forum. For the past few years I have studied several of these crossbows in various Finnish museums and also searched for archival material concerning their use. Naturally the following text can only scratch the surface of the topic but I would be happy to answer any question you may have.

There are no periodical pictural evidence concerning the use of crossbow in Finland, save for one drawn in late 18th century. All we have to work with are then the very few literature records, archaeological evidence and the museum collections.

The earliest archaeological crossbow records starts from the late 13th century when the first crossbow bolts appear. It was either the Danes or the Swedes who introduced this weapon to Finland. Also at the same time we will see arrowslits build on the first stone castles on Finnish soil. Collection of apostolic penitentiaries written down between years 1410 and 1526 and published in 2008 show that crossbows were fairly common in Finnish cities during the 15th century.

The castle ledgers beginning from year 1537 record two types of crossbows used by the military and held in the castles: horn and steel bow crossbows. The first ones were all imported but some of the latter ones were also manufactured in situ. Viipuri Province's taxation ledger from 1541 mentions a tribute paid by the people of Koivisto island to the Viipuri Castle: 21 crossbow stocks made out of Norway Maple. However this was quite special tribute and only used in that region.

According to my calculations, there are some thirty crossbows in Finnish museums. Most of them have only their stocks preserved while relative few have also kept the bow intact. The oldest stock is dated to year 1646, while the youngest one was made in 1772.

The construction of Finnish crossbows are very similar between individuals but Finnish researcher U.T. Sirelius managed to identify seven different subcategories based on minor details. In general most if not all of the stocks are made out of birch and decorated with inlays made out of forest reindeer's or moose's bone or antler. All of the museum examples I have seen have the bow made out of soft iron - steel laminate but on the other hand we also have historical information on wooden bows on crossbows.

Crossbow or bow was never a choice of weapon for big game in Finland; it was mostly used to catch otters, squirrels and rarely fish. Spear was used to kill the largest animals, i.e. bear, moose and reindeer. We have only one description on how the Finns used the crossbow, by Giuseppe Acerbi on his book Sweden, Finland and Lapland to the North Cape in the years 1798 and 1799:


In shooting the squirrel they employ, as has been intimated, a fort of blunt, pointless arrow, that they may kill the animal without injuring the skin: and what is deserving of being noticed, they do not take aim as we commonly do, by bringing the handle of the cross bow near the eye, but set it upon the belly; and yet by this method, which appears so awkward to us, they seldom or never miss hitting the object. The arrow is too valuable to be lost; for the moment it falls, it is picked up for another occasion.

Some crossbows from the collections of the Finnish National Museum as drawn by Sirelius in 1913. 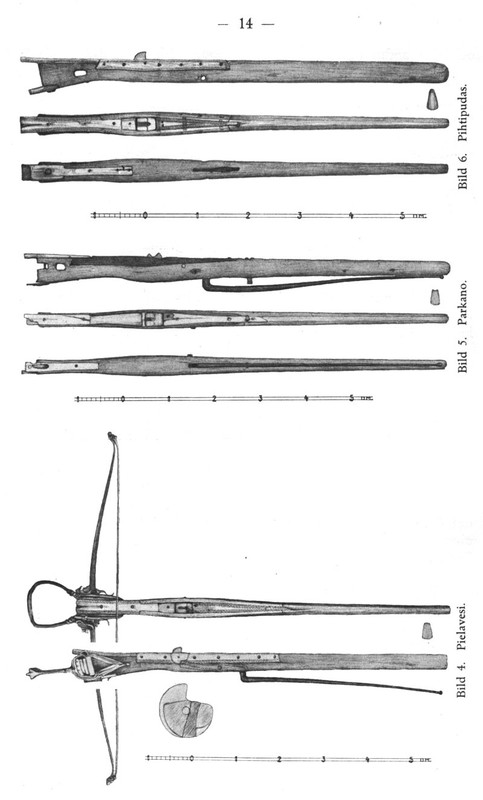 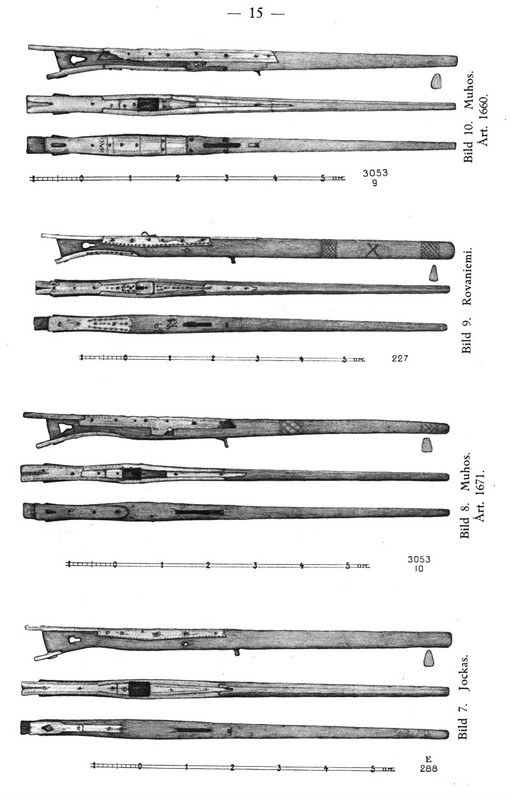 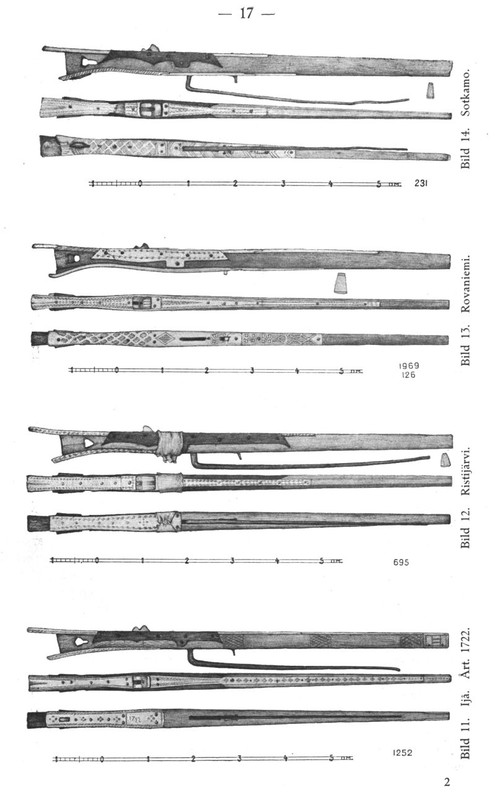 Thanks for sharing the information. It is interesting to note that the crossbow in different forms and for many varied purposes was so wide spread. I'm fairly new to crossbows myself, yet the realization is that it seems in past history for its time it is as revolutionary as the wheel, and of course now it seems the interest in them has not wained.

Thanks for posting those drawings. I'm glad you post the group of picstures. it's really informative to look at them togather and see the similarities and the differences. Helps get a better understanding of this style of bow and what the orginal owners thought was important.

Learning the shooting from the hip style would be interesting, it would certainly weird people out

Something Something Dark Side
jds6

Great information and drawings. Welcome to the guild.

An old Finnish enigma first written down in 1783 goes something like this when translated into English: What contains a lot of linen/hemp, a bar of iron, timber from birch and a pile of reindeer's antlers? The answer is a crossbow. The linen/hemp is the string, the iron is the bow, the birch is the stock and the antlers make the decoration.

Here are few photographs I took from the crossbows held in the permanent expedition at the Finnish National Museum at Helsinki. The first one is a Northern Savonian bow "from the late 18th or early 19th century" (probably the first). The thickness of the metal at the center of the bow is around 17 mm, c. 15 mm at the middle between the center and the tip and c. 10 mm at the end according to my rough measurements. 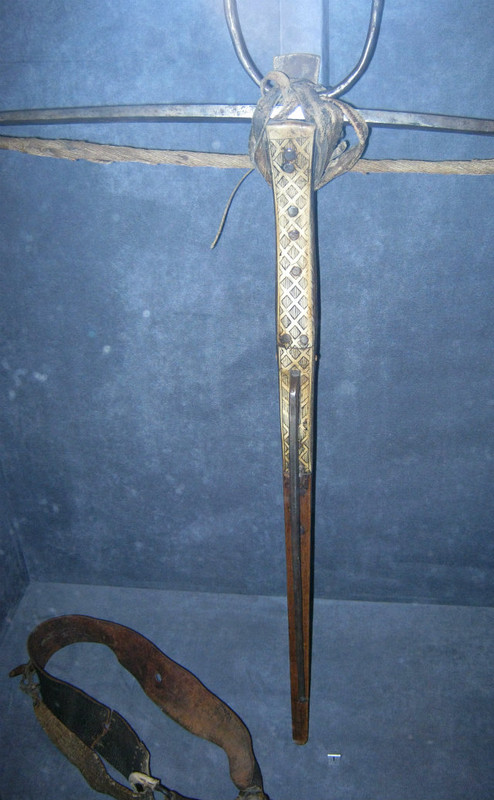 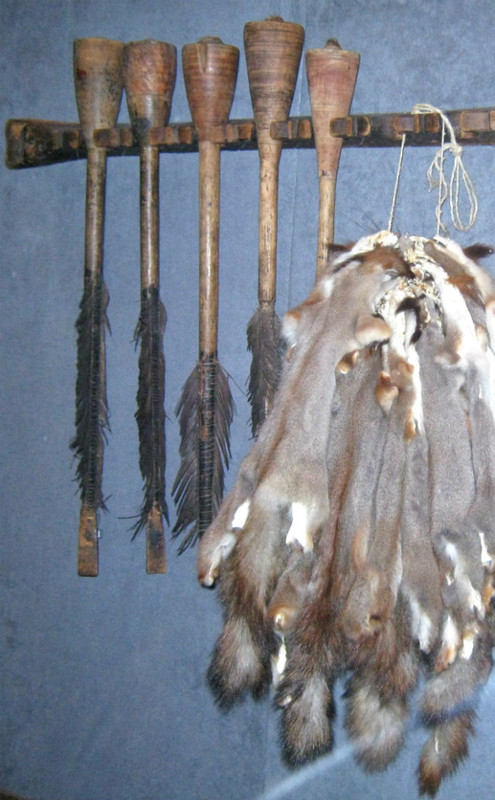 It is not mentioned at the display were this second bow is from. It has a bow with thickness at the center at c. 15 mm, c. 13 mm at the middle between the center and the tip and c. 11 mm at the end. In other words for these both bows for every 10 centimeters of bow length/width one has to take out around 2 mm from the thickness of the steel. 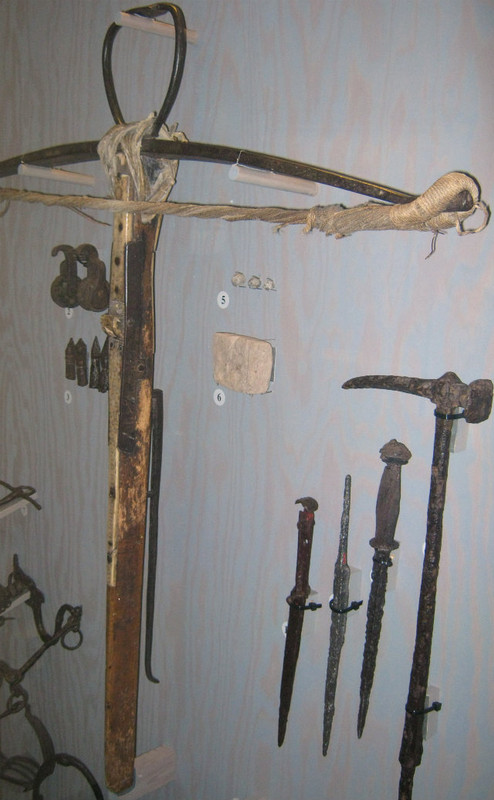 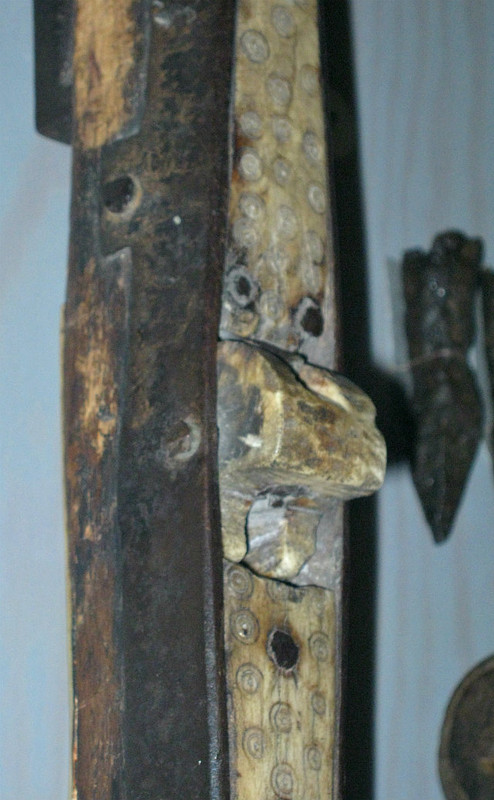 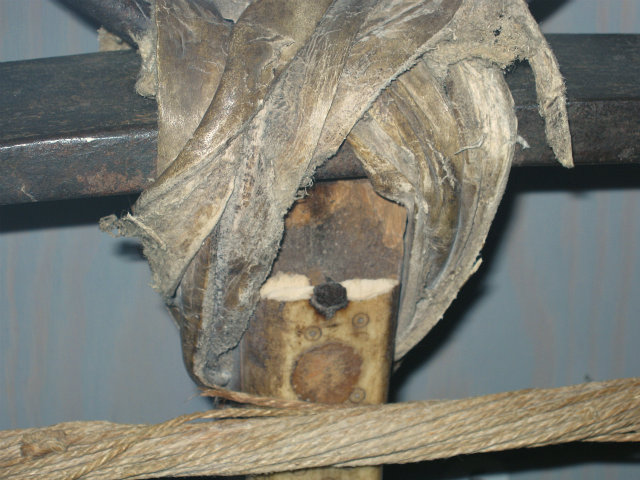 I am struck by how the Finnish bows are fundamentally medieval in shape, in spite of being much more recent. It we did not have reason to think that they were later, I would guess that they were from the 15th Century.

"I am struck by how the Finnish bows are fundamentally medieval in shape" (Mac) Yup, my sentiments exactly. They look a lot like the 14th century 'Dresden' bow. Geezer.
Mangrove

The Finnish culture in general is very conservative. This can be seen in every field of live; language, farming and hunting methods and housing. The famous example of this is the word for a king in Finnish language: kuningas. This is a 2000 year old loan word from Proto-Germanic language, where the same word was kuningaz.

As for Finns being conservative: I would expect no less. Living on the edge of inhabitable space makes for very careful people... much like sailors. Any change must under plenty of empirical testing. If it kept grandpa alive through the Great Blizzard of ought-five, it's good enough for me.
Geezer
Michael

Martti Hello: Outstanding photos Thank you. With those measurements given did you ever figure out the draw wt needed to span the weapon. And also the distance to the ruler nut. The mechanics of a crossbow are just awesome. Thank you again for sharing this important information with us. Mike
Mangrove

Michael wrote:With those measurements given did you ever figure out the draw wt needed to span the weapon. And also the distance to the ruler nut.

I do have access to AutoCAD but I would have to first found out a bit more about the mechanics of the materials used to forge the bow before I can make simulations. The distances from the undrawn string level to the ruler nut are between 13-15 cm or around 5"-6" for the crossbows that I could measure.
Mangrove

Finnish epic literature (of which the Kalevala is only a small part of) contains many references to crossbow and their bolts. Crossbow is often described as mighty weapon capable of killing a horse or a moose. They were also expensive as one might image from the level of ornaments on them; estate inventories from the 18th and 19th century show that a good crossbow along with all equipment related to it was worth around a half a dozen of sheeps or a bit more than a colt or a fine, ornamented chest.
Sponsored content