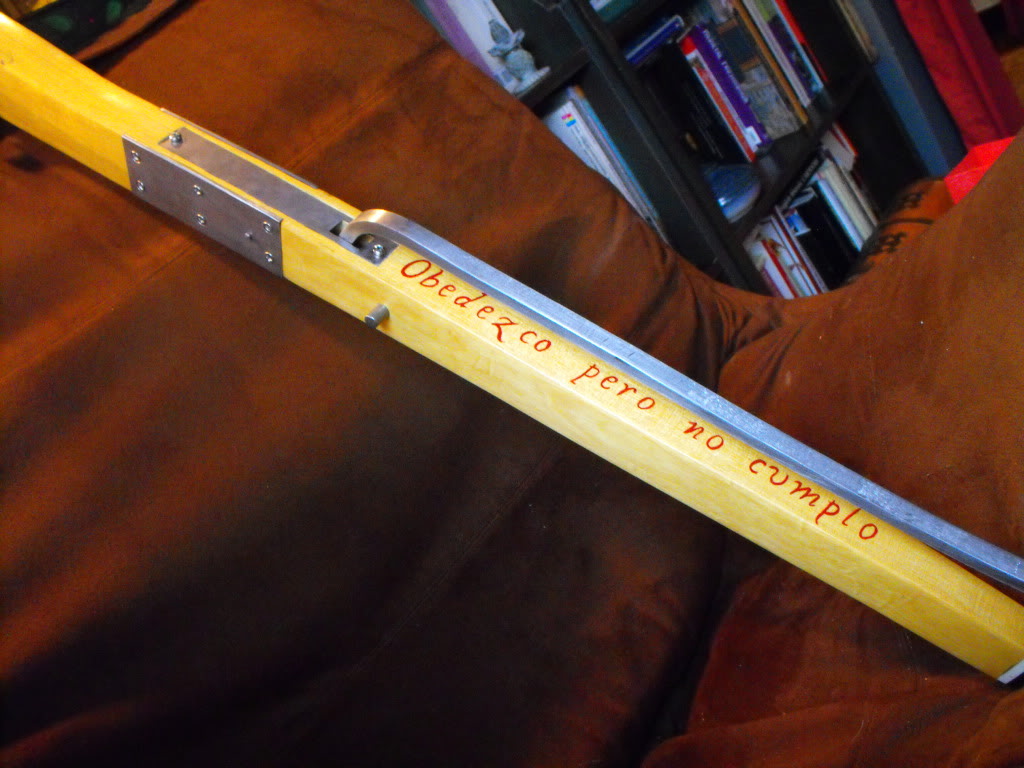 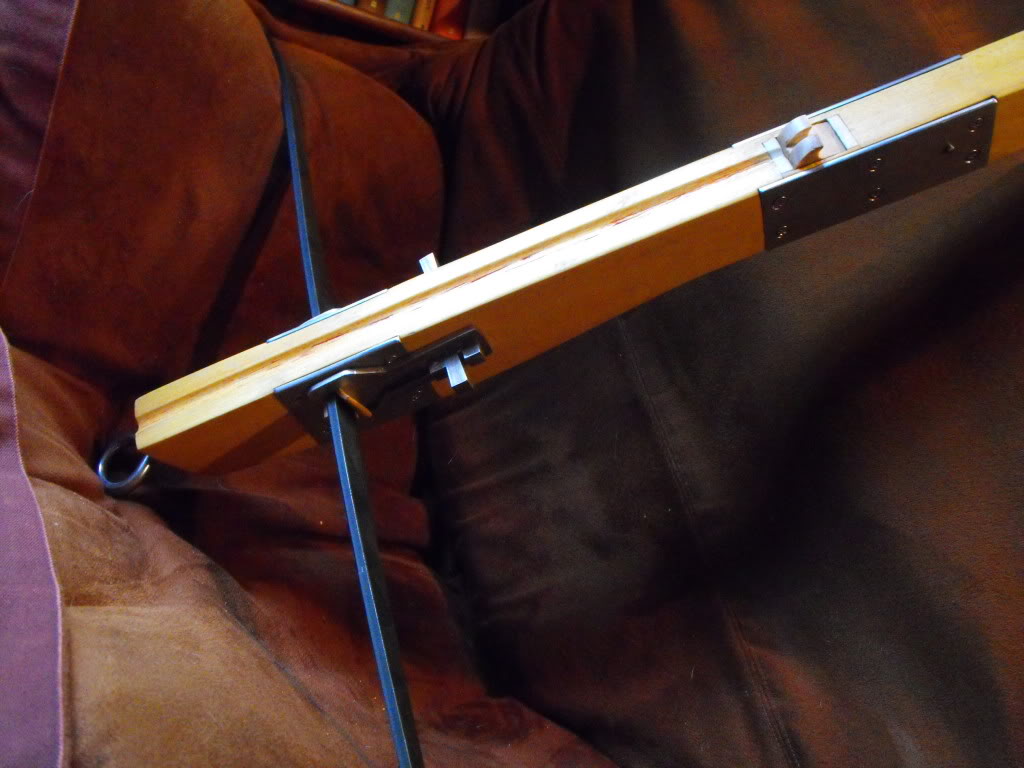 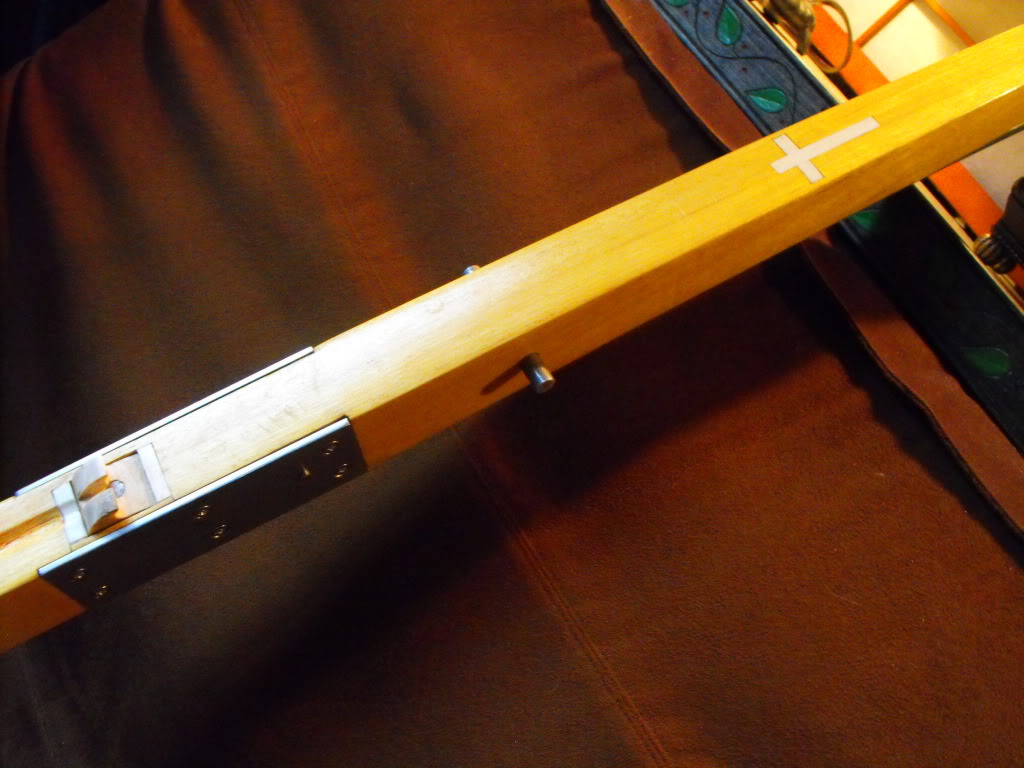 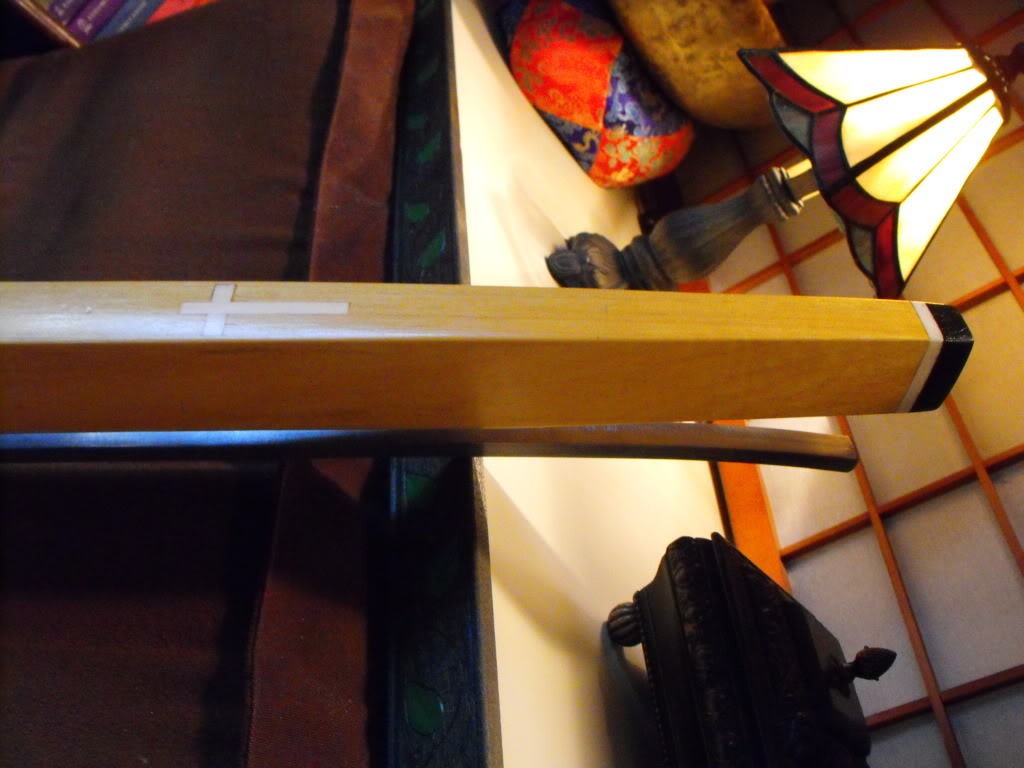 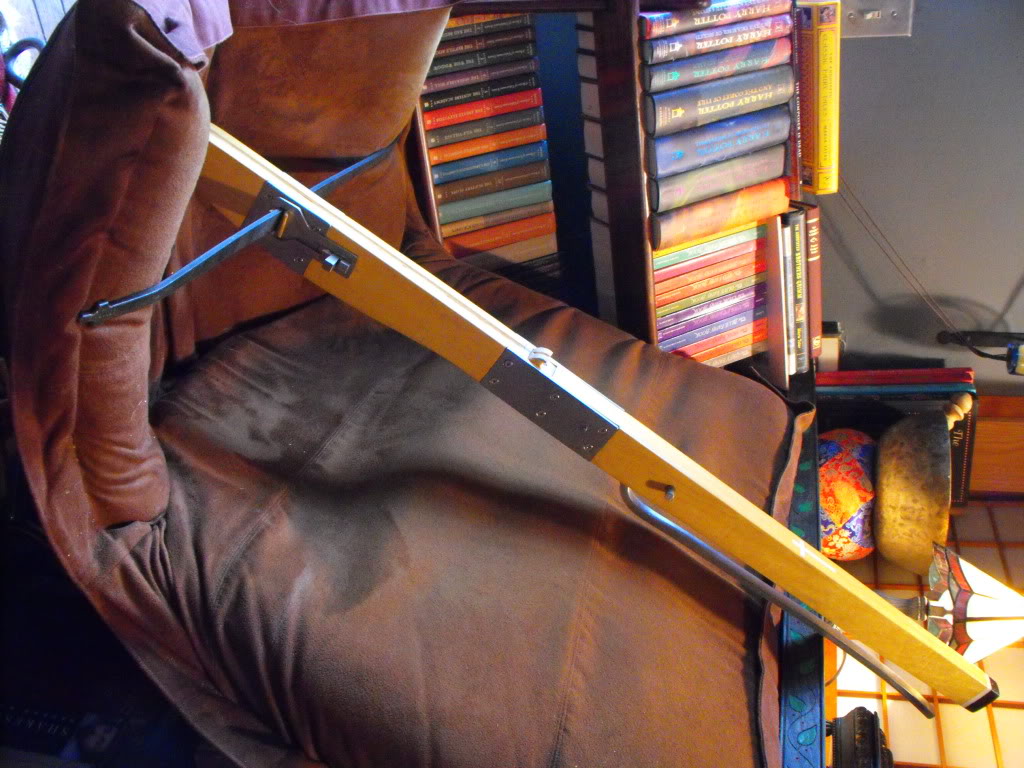 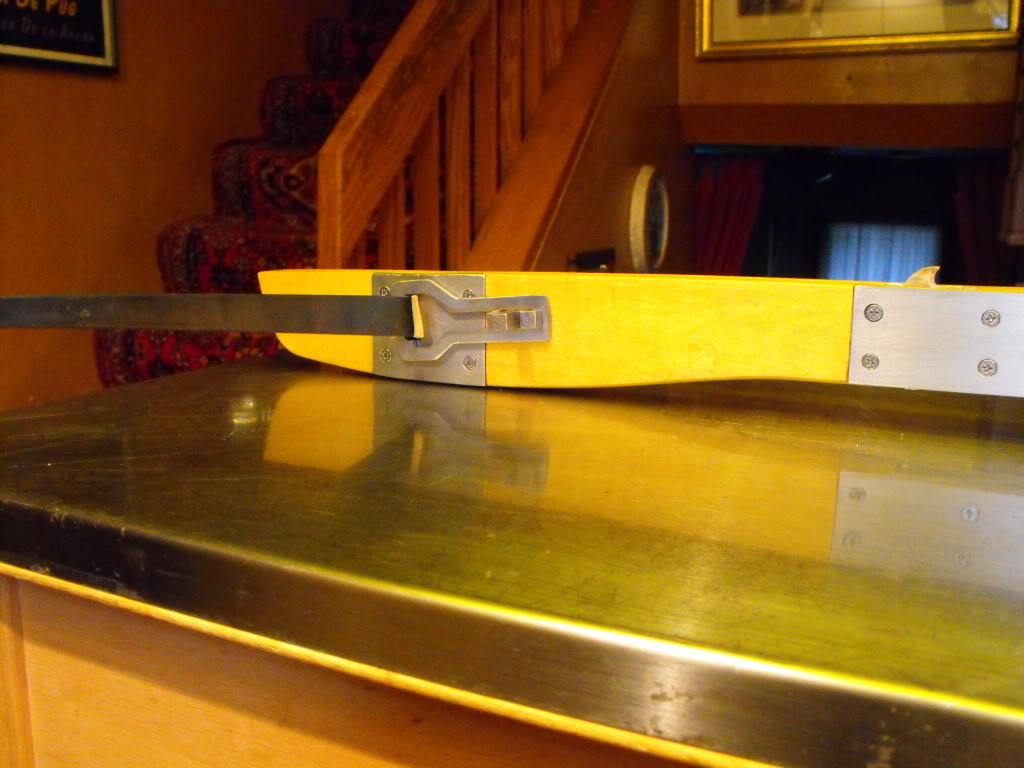 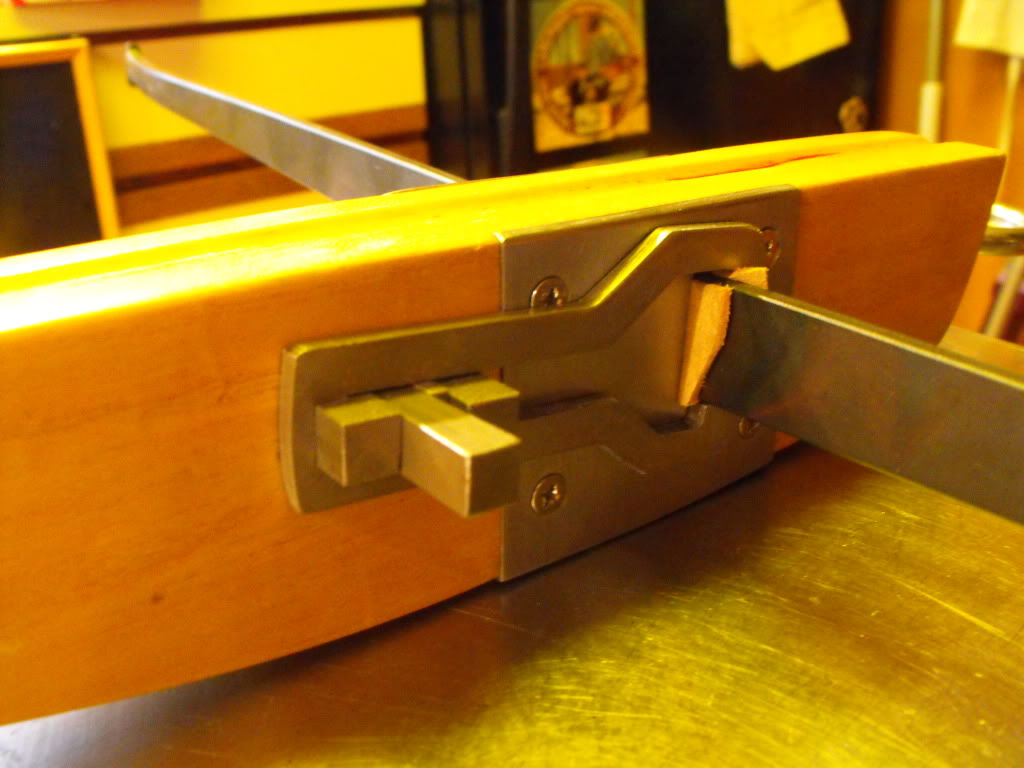 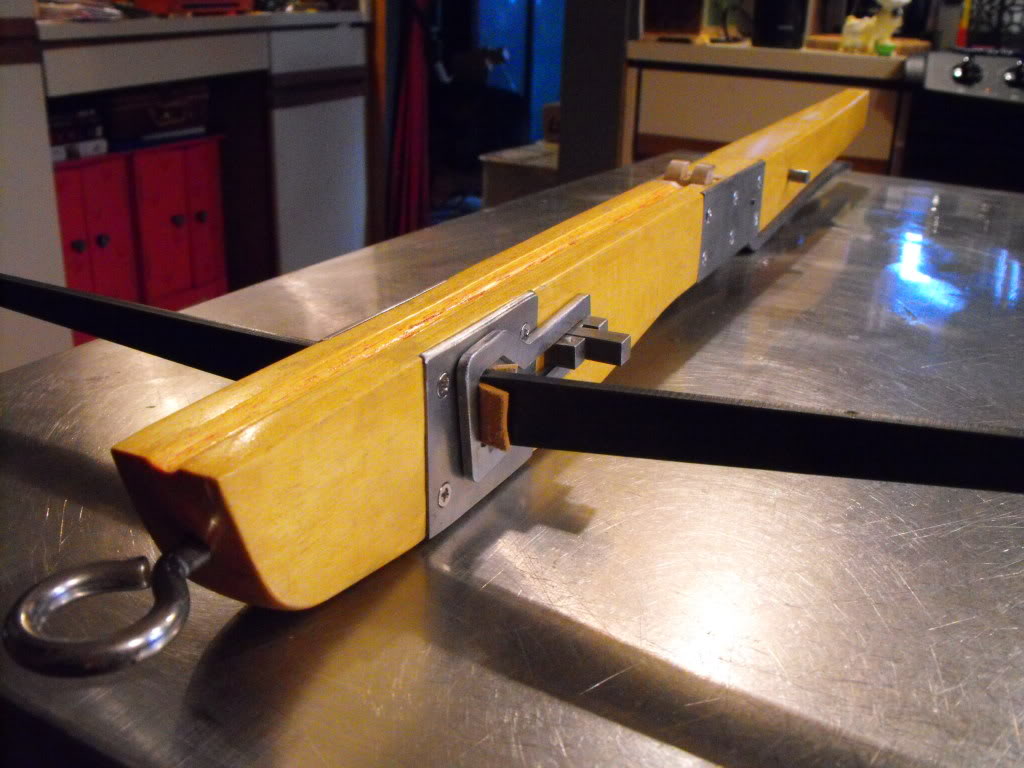 Hi, gang. It has been a while since I posted anything, but I do check in from time to time, and have been busy.

I think I posted a while back that I have been commissioned to build a German style heavy crossbow from a fellow forum member. That has been occupying most of my time just in designing the trigger, which, for a 850 lb. bow, really is my single biggest concern, and I spend a ton of time making drawings and testing out the system I came up with. But, there were some design ideas I had to try out with a working crossbow, so I decided to make a new weapon as a dry run, so to speak, to incorproate those ideas into the German.

And here is the results. One of my biggest single worries was how to make a prod socket with really well constructed bearing blocks, and it came out well.

With all that being said, this is an interpretation of a Spanish crossbow from the period of around 1500 - 1600, ie a Conquistador ballesta. I used yellow heart (Euxylophora paraensis) for the tiller, which is one piece. This wood is relatively inexpensive where I source it, is fantastic to work with, and glues and works easily. I simplified the tiller decorations with a simple bone inlaid cross, and put a non-authentic bone and horn buttplate on, 'cause I think it looks cool. Antler nut, and mild steel metal components. A true reproduction of this kind of weapon would not have had single side plates and lock plates done in this fashion, but would wrap all the way around the tiller and been folded onto the top surface, and would have been riveted on, not screwed on, but I think it looks nice and is very functional. I used a non-authentic front ring, not hand forged, but that is for later bows of this style, which I find very appealing. I used bow irons for the first time, and am totally in love with how simple they are to use, and how easy it is to remove the bow without having to cut through a hemp bridle if I have to adjust the angle of the bow, etc.

One big mistake is that I first painted the arrow groove, and that was not a good idea, some paint remains, and I decided to cut my losses and just hope it doesnt look too terrible. Think before you paint is a good lesson to take forward.

The prod is from Slowbow, 165 lbs., so this is a light target bow. It weighs 7.9 lbs, so pretty hefty, which should help with shooting. I began this project at the end of November, so it went relatively quickly.

Feel free to ask questions. Now that this is essentialy done (still a bit more to do, touch up here and there, refinish areas that need it, etc), I'm back to the German with all this new knowledge to be applied to finishing that project. Happy yule to everyone.

Paterson gives the draw length of these crossbows as 5 inches.
According to Jean Liebel in the book Springalds and Great Crossbows the initial velocity was 50 to 60 metres/second in general for medieval crossbows.
stoneagebowyer

Todd, the slim lines are very appealing to me, the simplicity of the overall design, as well.

As for oveall dimensions, to keep the integrity of the design, I made it longer than I think most of these types of Spanish bows actually were. I have a little museum publication, Arms and Armor of the Conquistador, 1492-1600, Florida Museum of Natural History, 1990. That was my primary inspiration for making this weapon. The bow they illustrate has an overall length of 36 5/16". Mine is 40" tiller length, not counting the front ring. The weight is fairly heavy, at 7.9 lbs. Yellow heart / Brazilian Satinwood is a very heavy, dense wood, so that adds to the overall weight, and I am guessing that it is heavier than historic examples, but not by much, if they used fruit wood, a typical material.

Factor in the Alchem-style prod, not a historic example by any means, and it has an 8" powerstroke, much longer than the length Taxus just quoted (thank you, Taxus), and a strung length of 3.5 (this came out to 3.75", very acceptable). If I had made the tiller shorter, it would have had a stubbier look, and I wanted to keep that lean, long look that tapers past the lock. So, it is a give and take between design aesthetics and functionality, which is one of the most fun aspects of designing a historic bow without being slavish to exact dimensions of a particular original.

Another nice feature of this design is that they can have simple safeties. I opted to not do that for this one, but I will be making other Spanish style crossbows, and will incorproate that in other projects.

And in the end, it is an interpretation, so that non-functional spanning lug is there. I wanted the look of one, but didn't build it to be spanned with a goat's foot lever, but a whippe. It looks cool having the lug, and I wont appologize for having it in there, nor the non-historic buttplate I made from bone and horn. It is pretty, it protects the butt, and I wanted it, so I build it in.

Was a real kick to see you shared your build outside of the Guild, all compliments on there are very well deserved.

Skinny fella, but must be a hefty bow with so much metal on it. Still...bet it's smooth as ever to aim and shoot.

And hey, good to see you chime in.

Thanks for your kind words! The project was a lot of fun and very successful for me on different levels. It is heavy, you are right. The combination of steel parts and the type of wood I used resulted in a weapon that is 7.8 lbs – heftier than a current issue M4.

The single biggest lesson for me was crafting bearing blocks. And even with this weapon only spanning 165 lbs., there are some pretty powerful forces going on in the lock. The rear bearing block came loose after about 30 shots, so those have to be better constructed, and I think riveting or pinning the front and rear bearing blocks is necessary. The repair is going to be pretty easy, however. For that heavy German, I’ve redesigned the lock system slightly so that both blocks will be fastened securely with a minimum of 6 places: 4 screws (2 on each side), two rivets / pins inserted vertically.

The other lesson learned is that a long trigger makes for lighter release. I can see already that such a long trigger does get taking used to, and a misfire would be easy without care. Shooting from the bench with the weapon held up by sandbags is no problem, but it would be easy to engage the trigger just while shouldering it for an offhand shot. The next Spanish style crossbow I will add that simple flip up/down bar safety that this kind of weapon often had.

I do promote the Guild when I can to folks I think are receptive to this crazy pastime of ours.

Wow, great work. Looks similar to the one I posted last night. I too used single side plates, a little easier that way!
Great looking piece!!

Thank you, jds6. I liked the two photos I was able to see of your weapon, but the others were just red xs. Could you post photos so we can look at your work more easily?

Don't know what happened with the photo's. I could see them in the preview. Will post new pictures. Thanks for the info.