Geezer here, with a fresh observation. Whereas most of us go to a lot of trouble to make our bolt-track/table straight and slick, I have observed a fair number of medieval/renaissance crossbows that feature a ramped track. Lightweight Spanish bows often have no bolt-groove at all for the first inch or two ahead of the lock. The groove starts there and gets progressively (but not very) deeper as it goes forward. Of course many of those fat Germanic sporting bows have no groove at all, but shoot off an inlet bolt-rest. Note that a bolt-rest that is TOO high will result in your bolt porpoising in flight, just as a rest that is off center will make your bolts yaw or even whirligig in flight. Generally I try to discourage my customers getting the rest in mortise, since the blasted things get knocked off regularly and I'm constantly replacing them, particularly for people who never mind their brace-height. For people who want un-grooved bows, I prefer to provide a simple ramp at the head with a bit of groove cut into it. (a fairly common feature in nordic bows)
Some bows simply have a rising bolt-track, particularly at the very end of the power-stroke. If you do that right, it should give your bolts a little loft, resulting in a slightly longer point-blank range, and maybe that was the whole purpose back in 1500, but I have another theory: Perhaps the ramp is intended in extend the useful life of laminated horn/sinew composite prods. I figure any bow that you have to glue together will eventually come apart, due to a combination of flexing and shock of un-tapped energy absorbed at the end of the power-stroke. So if the bolt-track ramps upward at the end of the string-run, you Should get a slightly softer stop, as the friction increases, with less recoil and noise. Of course that means you're wearing the center-serving a bit more and twisting the prod a bit, but it should soften the shock as the string halts the prod, and that might be critical in a prod glued up with fish-glue.
Of course if the ramping starts too soon, you lose a bit of energy at the end of the power stroke, but I suspect most crossbows and handbows for that matter, don't get much push from the last 20 percent of the power stroke anyhow. Maybe it was worthwhile to sacrifice that last bit of push in favor of longer life for a Very Expensive horn/sinew composite prod. So does this have application to modern laminated bows as well?
Just a thought... comments? Geezer
Pavise

Some very valuable observations and comments as usual my friend.

I have plotted the path of the string and prod by using scaled drawings, and depending on their vertical location in the stock, the limbs do indeed twist as they seek alignment with the directional forces and back again upon release. Keeping frictional losses at a minimum is one of our goals and as you point out there are many examples where this has been explored by various makers. The "ramp" you describe reminds me of the launching deck on aircraft carriers where a final lift ramp forces the plane up and away. I am now thinking that a grooved but ramped crossbow deck, that only acts upon the string, would help towards retarding unwanted harmonics and repeated oscillations before the string finally comes to rest.

Do you have a picture or two of this feature that you could post, either from your bows or historic examples? I'm having a little trouble visualizing it.
Basilisk120

I believe this is what he is talking about. This is a crossbow that was made by Lightly.
There were taken with my phone quickly so sorry about the poor quality. 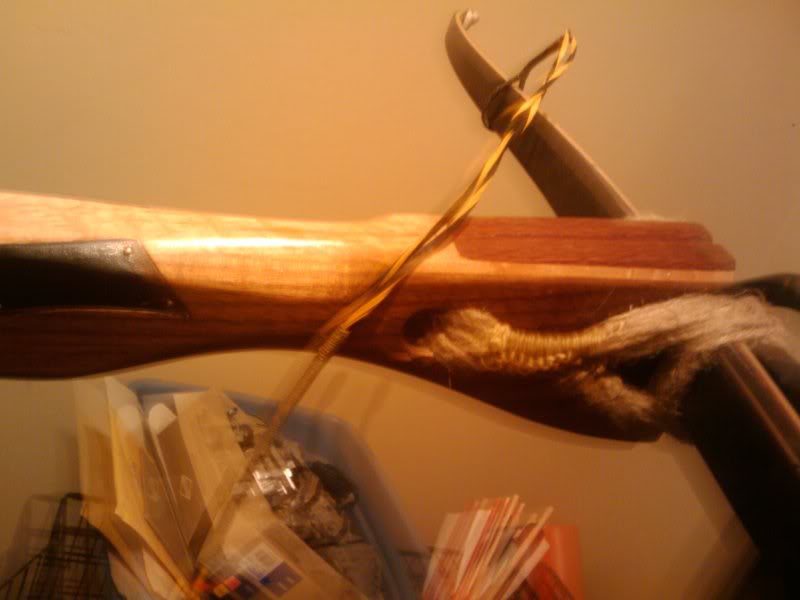 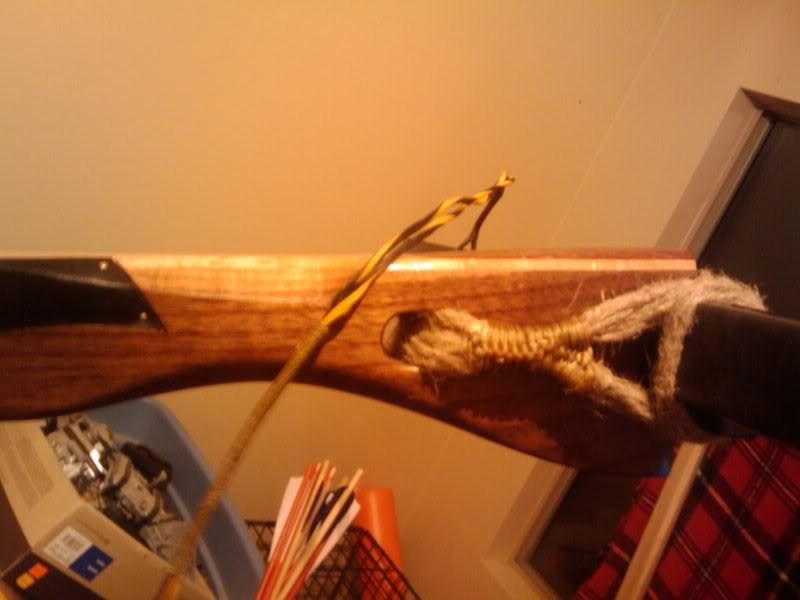 Okay, that's kinda what I was envisioning from the description. Is this mainly seen on earlier bows - particularly the ones with horn/sinew prods?
Geezer

Are ramped tables mostly a feature of horn/sinew composite bows? I believe that is the case, but not invariably so. Geezer
Lightly

I could not find a photo of a ramped bow amoung my photos, however, I DID find a photo of YOUR Ramped bow, Basilisk, just before you bought it, at Estrella.
http://www.flickr.com/photos/swifthoundbows/4430546999/in/set-72157623490983579/
The dark portion at the top of the bow is the ramp, with the photo being face on, you cannot tell that that bit gradually rises to the tip of the bow.
I don't have any right now to take a photo of, but I will have a look in the shop when we get back.

PS
Basilisk, in that Flickr set, there are a couple of photos that I took as I replaced the prod on your bow....
Sponsored content