Why do match target bolts work so well?

Why do match target bolts work so well?

Hi guys,
I am looking for Information on how and why these match target bolts work so well. When first looking at those I would have never thought that these could be so accurate.
I am speaking of those unfletched totally front heavvy and short bolts like these: 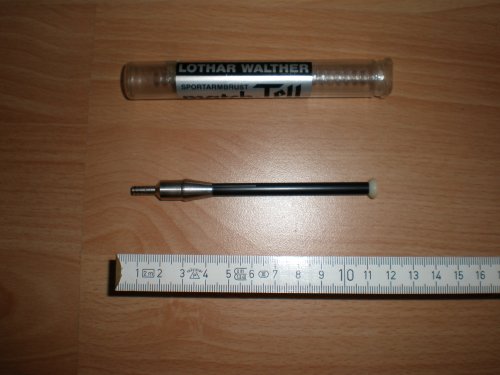 They are shot from these target crossbows: 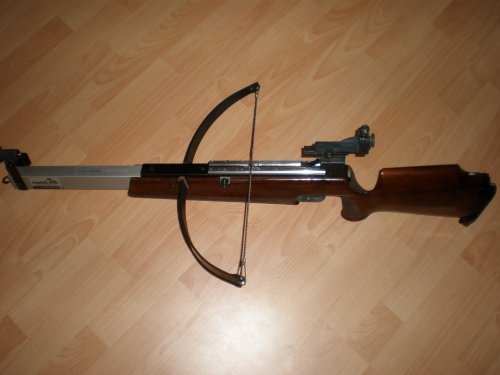 They are shot at distances of 30m and a "group" of 1cm (they actually cannot shoot groups, only a single arrow per target because of the accuracy!) is considered bad!

Current World record is 298 points out of 300 possible.
Does anyone have some specs on these bolts? Weight? COG? I always thought that a bolt would need fletching to stabilize it in flight and some rotation would add to the stability even more. These only have stabilisation from drag on the small nub at the end. And no spin ?


Also the COG on regular crossbow bolts is just slightly forward of the center while these seem to be totally front heavvy?


Has anyone of you experience with these kind of bolts? Are they only good for short distances?


I think the accuracy is helped by the precision build of the Match target crossbows, AFAIK they use some kind of "sled" riding in the bolt groove to get a consistant release with no side deviation but nevertheless the bolts seem to do quite well aerodynamically.
Regards
Rolynd
Geezer

It's my suspicion that they Don't work very well. What's more, the slider used on these outdoor Swiss crossbows is bound to eat energy that could go into the bolt. What's important to understand is that the bolts are very consistently made, to close tolerances, and the bows are constructed to reduce variables to a minimum. Since you only shoot one bolt over and over (with the same side up, by the way) you get very consistent flight over a specific range. That means the target archers can concentrate on their form, knowing that all crossbows in the competition are essentially identical.
In the world of sailing, there's a class of sloop called 'lightning', they arent the fastest boats of their size, far from it, but they are very close to identical. That means winning and losing is almost entirely due to operator-skill, not technology.
Geezer
rolynd

So its more like dealing with the same error or deviation on every shot and once the crossbow shooter has sighted in the bow he can just concentrate on form.
I am aware that the slider uses up energy but at these distances I dont think they mind much, its not that they have to rely on penetration and energy ,as its not hunting but only precision counts.
But still then, these bolts must fly relatively good to produce the same error every time. I would have thought such a short bolt is more prone to unpredictable or erratic flight patterns without any great means of stabilisation. But that does not seem be the case.
Gnome

My understanding is that medieval bolts were typically fletched with no attempt to add spin, just drag at the back to keep the pointy end forward. With the COG so far forward and the drag inducing nub at the back, those match points don't have much choice but to maintain the correct attitude in flight.

Well, must be then.
I would love to see a slo-mo vid of one of these in flight!
I begun to think of blowgun darts and these also fly well with only a drag inducing cone at the end and are accurate. Maybe I will make one of those short bolts and do a few tests for fun, at least you do not have to worry about the correct spine, guess these do not flex any:D
kenh

... like a sinker glued to the end of a straw, guess which end is gonna go first!
kiwijim

The slider may be useful for reducing efficiency and speed, although these are not reason for its use. Let me explain..... if those bolts were travelling too fast, they would be all over the place Their profile reminds me of a 'match' air rifle pellet- front heavy and a skirt to create drag and stability. With competition air rifle shooting, the competitors are prepared to sacrafice speed, and a good deal of $, to achieve consistant accuracey.
Sponsored content