Headsup, crossbow makers.  I just discovered this site from Spain.  It's a catalog for an exhibit of artifacts from the last Moorish stronghold... the Alhambra in Granada.  Take a look, there's a really interesting and different Arab crossbow, plus illustrations of more european style crossbows being used by moors-arabs-whatever one calls muslim Spaniards of the 15th century.  It's pretty cool anyhow.  Geezer http://www.alhambra-patronato.es/fileadmin/pdf/CATALOGO_Armas_y_enseres_de_la_defensa_nazar__.pdf
jds6

Very interesting, the crossbow looks very thin to say the least. Thanks Greezer for the heads up. Just wish I could get it to translate into Texan!!!

For what it's worth, I've got some dimensions at least.  The stock length is 79 centimeters... call it 30 inches.  Prod length is 1.3 meters... pretty darned big... it looks like wood backed with a substantial bit of sinew.  The roller-nuts listed on another page all come out to 25-27 mm wide and @ 30 mm in diameter.  Given a nut of @ 25 mm (1 inch) wide, that makes this stick about 1.5 inches... say 37 mm wide at the lock.  Note that the stock suddenly narrows to a more or less cylindrical handle a few inches behind the lock.  I suspect that's the hold-point for the back hand, so some sort of tickler trigger (consistent with the bone nuts) should terminate about there.  Presumably fore-hand holds beneath lock, or more likely some distance ahead of that.
Note also that there's no real groove atop the stock, just lots of fancy carving that presumably would wear against the string.  I suppose the dark, bent-down section above the prod has some sort of bolt-groove, otherwise the bow's not actually shootable.  The text says markings on the stock suggest the bow either belonged to the Sultan's family or one of his retainers.   I hope that helps a bit.  Geezer
kenh

Great find, Geezer.  With any luck I'll be able to visit the exhibit.  My Lady Sally and I are going to Spain in October to settle some things with her father's estate (he passed away about a month ago). Probably no archery related souvenirs from his estate, but I will be bring back a WWII regimental Kukri (he served with the Ghurkas in Bruma) and perhaps an 18th century flinchlock pistol that he collected at some point.  However there is a rumor that he at some point had a crossbow (call it 50 years ago) in England.  Who knows what treasures we'll unearth.
Geezer

Great idea, Kenh.  Be sure and take pictures of the Arab bow, if they're allowed.  Views from the lock back might be helpful in replication... see if there's any sort of trigger left.
As for life being a beach, I saw a bumper sticker on a weekend sailor's car that said.
'Life's a reach, and then you gybe.'
Geezer
mac

There's a good pic of this bow in Harmuth's book.  I will try to post it later, if I can figure out what the problem is with my camera.

Here we go.  My battery was just low. 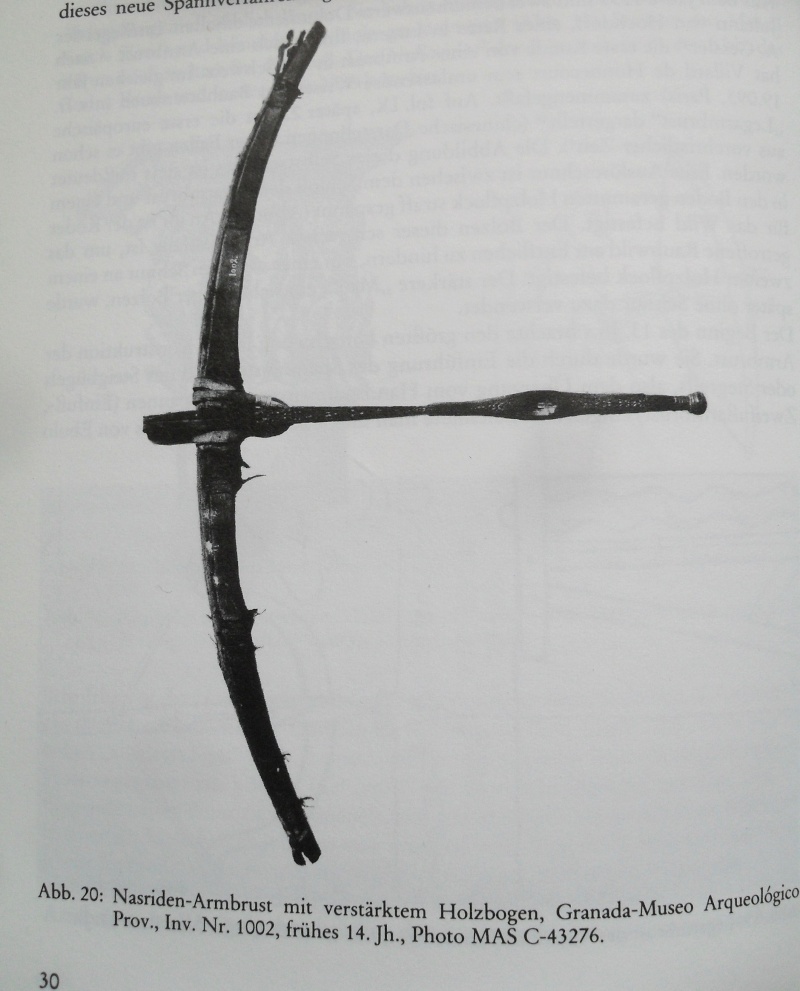 It really is skinny, isn't it!

I don't want this thread to disappear, so I am resurecting it to post new information.  I have been in touch with the museo arquelogico granada who kindly sent me a bundle of information, in the form of a copy of their fiche and a link to an article from 1982, which they believe to be the only article written on the crossbow - so well done Geezer for finding the article in the OP!

This is the text from the fiche after having gone through Google Translate :

Museum Archaeological and Ethnological Museum of Granada
Inventory CE01002
Generic Classification Weapons
Item/Document Crossbow
Material/Support Wood
Iron
Bronze
Ivory
Bone
Tendon
Technique Carving
Dimensions Major axis = 123 cm; minor axis = 80 cm
Description It is composed of two pieces of different origin corresponding
to a crossbow for war and another for hunting. The arch or yard is
made up of two pieces reinforced with tendon and five strips of thread
of linen and inserted in the hollow of the fork, tied to the carriage with
a link of leather straps that cross it through a perforation
on top. The two fragments that make up this piece
are locked in three parts of it with ties and the
ends have incisions to hold the strings or ribs
who would have the mission of tensing the bow to make the shot.
The gun carriage is triangular in shape, open in a fork at its most
wide to accommodate the arch whose top slopes to
facilitate the exit of the arrow and act as a crosshair when aiming.
The carriage progressively decreases from the jaws to the piece
of the bone cylindrical, striated in the transverse direction of the tail,
design already documented in the ´Cantigas de Santa María". The walnut
it is housed at a third of the total length, reinforced by a piece
Chiseled with a clamp that reinforces its box and the breech. The
key is covered by ivory plates and the clamp remains
delimited with inlay motifs. The ornamental richness of the
gun carriage is considerable and indicative of a luxurious hunting crossbow.
Some authors, carried away by this character, have considered that
It belonged to the Royal House (Mendoza Eguaras, 1982). Their
inlaid ornamentation is carried out in two sectors of the same: a
lower ring that houses the walnut and another part in the extremity that
Finish off one of the fork handles. His work is lasso
geometric bronze with ivory inlays. The applications
of openwork and chiselled bronze are the main decorative element,
with ataurique work, which gives it great aesthetic beauty
to the set.
Dating 1300-1499
Cultural Context/Style Middle Ages. Al Andalus. Nasrid
Use/function Weapon
Geographic Descriptors Grenada
Place of Origin Mecina Bombarrón (Alpujarra de la Sierra, Alpujarras (region))
Reasoned Classification The crossbow played a very important role in the world
Muslim, being frequent the news about her in texts from
the twelfth century. They highlight the effectiveness of crossbowmen, including as
special forces of the army. Also in the Cantigas is
reflected their work in the siege of cities, documenting
stirrup crossbows from the 13th century. The construction system of
This piece is collected by Ibn Hudayl, a Granada writer from the
second half of the 14th century, and in the paintings of the Alhambra.
Type of Collection Stable Collection
Bibliography MOLINA FAJARDO, E.. ´Hunting in the Alhambra enclosure´. 1967. p.
31-53.; Alhambra Notebooks, 3.
Observations Available for temporary exhibition, according to current legal regulations.
stuckinthemud1

For Spanish speakers, the original text:

So if I'm reading this right, the prod was a "loose laminate" of two pieces held together with ties:

" The arch or yard is made up of two pieces reinforced with tendon and five strips of thread
of linen.... The two fragments that make up this piece are locked in three parts of it with ties and the ends have incisions to hold the strings...."
stuckinthemud1

Umm, not a loose laminate, I'm not even sure it was two pieces or if the pressure from the sinew drying split the lath, but that is idle speculation - the bow is in two pieces a top and a bottom piece, not a front and back piece. You're really on the ball today Ken, am trying to resize and post the photos from the fiche.  Anyone know how to translate a PDF?  I can screen grab the 1982 article but I can't translate it.

I wonder why they think the bow and tiller do not belong together.  They seem to fit OK, and the side view shows that while the tiller is slender, there is still a lot of wood there.  I think the tiller is probably strong enough to handle the bow.

This is a set of screenshots of the article from


It was published in 1982 but I am posting it here so that all the major articles on the crossbow are in one place.

I'm afraid it's still in the original Spanish, once I manage to get it translated, I'll post an English version (unless someone else gets there first!)

With the nice new photos photos I now see the "split" lathe.  Funnily enough I was actually thinking about this arrangement in order to make a wider prod but not necessarily stronger prod. A useful idea if the timber you have readily available isn't big enough.  As long as the lathes are bound together -- and in this case they were sinewed across the split as well as being tied and held together at the tips but the string loops -- there should be little issue as long as the two pieces of wood share similar flexibility.
Sponsored content

» My first Crossbow Tell me what you think!
» Chinese carpenter make bed crossbow, earlest repeating crossbow and chu-ko-nu
» My 2nd crossbow project - german crossbow with cranequin
» can you ID this crossbow?
» "Crossbow this-Crossbow that"