I'm branching out from my SCA interests into some of the other combat games like Dagorhir and Belegarth. A guy from Dagorhir wants me to look into making some crossbows for his group, but they can't have the prod exceed 35lb draw weight. I can't imagine the thing even throws a bolt worth a damn at that weight, especially considering they allow regular bows to have 35lb at 28" which means the crossbows are nerfed WAY down in terms of inch pounds. For durability-sake I was thinking of a fiberglass prod made from fence tension bars. Is it even possible to make one from those fencing tension bars even low enough draw weight? I'm thinking I may have to look into bamboo laminate as has been mentioned in a few other posts here in the LARP forum. It'd sure be nice if some people in these various groups, be it SCA, Dagorhir, Belegarth, etc would listen to logic and realize that they're setting unrealistic limitations on the crossbows. Anyway, would maybe a single bar work to get a lower draw weight? I found a supplier where I can buy a bunch, so I'm going to get a lot of them, just because I want to experiment with a laminated prod for a 200lb+ hunting bow. Anyway, I'll have enough to experiment with - just wondering if even the single thickness is going to be too powerful.
phuphuphnik

Can you compensate with a longer draw? Both my girls' bows are 50# and they are limited to about 30 feet. My arrows are just too heavy for them. Could the rules be so limiting because x bows are perceived as being so much deadlier than longbows I wonder? (thanks Innocent II)
Geezer

Geezer here: concerning larp/SCA crossbows.  For many years, SCA was my primary sales venue. I sold lots of crossbows with the group. Primarily, we achieved this by vigorous negotiation with the 'marshallate' that's the rules-people. SCA allowed 30 lb. in handbows, and after a lot of argument and negotiation, we got crossbows allowed 600 inch-pounds (draw weight multiplied by power-stroke) Given the bolts being used, my SCA crossbows get @ 60 yards maximum range and 30 yards effective range. (good hitting at 20 yards)
The big difference between larp and SCA, outside some "authenticity" rules, lies in the history of both clubs, but basically it comes down to money in the old days. Larp clubs do not require any body padding or armor to play, and in particular, they don't require any sort of head or eye protection.  For that reason, though they allow up to 35 lb. bows (shooting heavily padded arrows) they also require bows to be under-drawn at close ranges... (however defined) Since crossbows can't be under-drawn for safety, this rule requires lower power overall.  Add to that the fact that Larp groups are not highly organized.  SCA has a national and international structure.  If you can convince the guys at the top that something is safe, you actually have some chance of getting the local club to go along.  Larp seems to have no such organization, so even if you convince one group to allow say, stronger crossbows, you're SOL with the guys in the next town.  My policy?  I'll continue to make 550-600 inch-pound crossbows for whever wants them, but I won't otherwise compromise on features just because some silly git had a brain fart. Geezer-Curmudgeon.
Geezer

And yes, you CAN buld a super-long stock with very long draw, attach a 30 lb. youth-handbow to the front and you're in business.  I've built a couple of those.  They looked awful and were quite unwieldy, but they shot pretty well.  Geezer
kiltedcelt

I feel like the MCS (Medieval Combat Society) groups like Dagorhir and Belegarth are beginning to come into their own in terms of what they bring to the experience. I guess in the past those groups primarily attracted the "stick jocks" and now they're bringing in folks who really put some thought and craftsmanship into their gear. What I like about them personally, is that they DON'T require all the expensive gear that the SCA requires just to walk onto the field. I also like that they have decided to not restrict folks to being historically accurate, or for that matter even of this planet or realm. I hadn't given much thought to the half-draw issue that you mention, even though I believe it is explained that way in one of the rule books. Oddly enough, one group nerfs the crossbows (Belegarth), down to 15# all the time since there's no way to half-draw a crossbow, while the other group, Dagorhir sets the crossbow draw weight at 35lb just like the hand bows. This last bit means technically there is no half-draw and a crossbowman who chooses to shoot when someone comes into close range can really nail someone. Anyway though, do you have any idea of what the draw weight ends up being on one of those fiberglass tension bars when there's only one in use? As I mentioned, I'm planning on buying some for experimentation for higher draw weights, but still kinda wonder if I'm even going to be able to use a single one for this MCS bow.
Geezer

Geezer here: as for fiberglass tension bars, I've never used one for a prod.  I have seen some very simple teeter-totter lock crossbows (similar to Skane pushpin in principle, except the release is on the top) that used flat pieces of fiberglass (or some plastic) sail battens. We used to see a fair number of those in SCA combats, thanks to very-very low price, but they only produced 350-400 inch-pounds, which was judged too LITTLE power for combatants to even notice in action. Nowadays, SCA tries to discourage anything Under 400 ip, whereas Larp groups end up with rather less.  But remember, SCA actually wears armor and particularly helmets with eye-protection. Getting a hard rubber blunt in the eye could leave a participant permanently blind on that side.  So the rules may seem silly from outside, but they're intended to ensure player safety.  So it kinda makes sense.  Geezer.
kenh

IMHO, having used the fiberglass chainlink tension bars, a 5 foot length would have a draw weight well over 35#!!

Kenh - thanks for the info. I have both a West Marine nearby that I can check out as well as a Cabela's. It actually looks like I can buy the fiberglass ones cheaper at Cabela's though. No surprise there, as West is usually more expensive on almost any product. Do you think you could make a high weight laminated prod using these supports, or would I be better off using the tension bars for that project? Also, are you just cutting grooves for the string in the end or actually shaping out something like a pin nock?
kenh

I think that by picking the right prod lengths you can get 150-200# easily.  Here are a couple discussions where jaeger22 built prods from the cover bows:

In this one he split the bow lengthwise:
https://thearbalistguild.forumotion.com/t1307-a-tale-of-two-bows#12387

and here was his first experiment:
https://thearbalistguild.forumotion.com/t1215-fiberglass-for-loose-laminate-prods

In both cases the overall length of the prod stack could be shortened a couple inces and gain significant draw weight.

You can see a couple versions of string nocks in those posts.  For my tension bar pro, I shaped out a pin nock, and then covered it with a layer of epoxy putty: 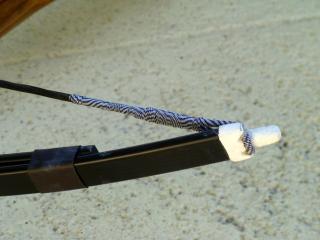