Hello folks, I've been working on my first xbow project off and on for a few months. I became fond of crossbows about a year ago, before then I built a few longbows but I felt I didn't have the knowledge or tools for the more mechanical workings of a crossbow. Since then I've learned plenty from the community and through books on crossbow building.

First I would like to say that since this is my first build there was a LOT of improvising with what I had available or within my budget so don't expect some flawless german sporting crossbow reproduction or anything. The only power tool I own is a drill, so an equal amount of sweat and blood (maybe even more blood) went into hacking this thing out.

This is the profile of the tiller. Inspired by 17th c. wheellock pistols. I wanted something smaller than a full-size crossbow but not as small as a pistol crossbow so I came up with this carbine crossbow profile. It gives me a nice 10.5" power stroke although its compact size means I can't shoulder it but I'm okay with that. I am worried that the tickler wont be long enough to give me an easy trigger pull.

The lumber is red oak, 3 laminations will make up the tiller, 2 of 3/4" and a middle of 1/2". I like the way the darker outer boards contrast with the middle board. Oak isn't my first choice of wood but it's the only hardwood available locally and I couldn't justify the price of shipping something nicer in. Unfortunately I managed to pick out perhaps one of the driest splintery boards they had in stock which made working with this stuff nerve racking.

For a prod I have 3 fiberglass tension bars supplied thanks to my good man KenH here on the forum, all measured and cut to the size I asked before being shipped. He also made a fiberglass loose-laminate which I would recommend you check out. I will use 2 of these for the loose-laminate prod, the outer bar is 28" and the inner will be 12". A simple wooden tip overlay will be used for the nocks.
(image coming soon maybe)

I managed to find a bar of steel, I think it was a handle for a car jack, it's some very ringy steel but I manage to cut and bend it with the right amount of elbow grease so it will be the tickler. Used up 2 coping saw blades cutting through that stuff.
(image coming soon maybe probably not)

This is a temporary nut of laminated oak, it's rather roughly hacked out. I'm using the same steel for the sear plate as the tickler in the hopes that two contact surfaces of the same hardness won't wear down each other. I'll buy a proper delrin nut eventually.

Here are all the componenets before fitting, and the chiseled out hollow for the nut which I was expecting to be a mountainous undertaking, but it actually took me roughly an hour, haha.

At this point the crossbow is functionally finished aside for a stirrup, bolt-clip, proper bridle, etc however the tiller is still just a huge two-dimensional wooden cutout so there's plenty of shaping to be done. Also, I didn't have the tickler pin in when I took this picture so the tickler looks a bit too far out because of that.

As a suggestion why couldn't you move the pivot hole on the tickler closer to the nut ?

That was the first plan I had, but I felt it would result in excessive travel of the trigger before release and I wanted a somewhat clean short trigger break. Since its already done I'll just have to hope its going to be bearable, although I tested it by placing the palm of my hand on the nut fingers and pushing as hard as I can while squeezing the tickler and for what its worth the release was smooth.


I think as long as I keep the contact points of the tickler and sear plate smooth and parallel so that they slide rather than grind or push on each other there wont be too much resistance. Might go back and sand and polish the two surfaces to a mirror finish.
Armymedic.2

I am just completing my first.   So grain of salt. But I had a friend pull against the nut to test my trigger placement and i felt like him pulling and shooting it for real were about the same resistance which wasnt much.  My prod is over 150# for reference.    Looking good.  Clean channel work for no power tools
Xamllew

Finally got to shoot it for the first time today after making a simple flemish twist string of jute and cutting out a channel for the bolt. Oh my, I am very pleased with how this tension bar prod performs. I only have self-bows to compare it to but so far I'm really excited, I'm only using one bar instead of a 2-bar lam for testing but even with this one bar the trajectory is almost totally flat shooting 30 paces out with a 300 grain bolt. I haven't tested beyond 30 paces (size of my yard) nor have I even tried strapping on the 2nd bar. I find the 1 bar prod is very pleasant to quickly pull and fire.

The trigger pull is surprisingly sweet, I estimate the single bar prod has a draw weight somewhere around 80lbs so a very easy trigger, almost a tad easier than I'd like actually, lol. I need to come up with a simple safety for the tickler.

One more thing, the roller nut has this extremely satisfying 'CLINK!' when you pull the string onto the nut and the tickler sets into place on the nut, its so sweet to hear.

Will get pictures tomorrow, sun has almost set and my shitty camera only looks decent in natural light.

Thank you KenH. Your own tension bar carbine was inspiration for my design.

Finally got some decent pictures of it, here it is all put together.

Real nice job X. Looks like like you made a great string. The ends look very strong. A small torch would calm the fuzz down. I really like the looks of it. I'm no expert but, it has to be true to period ,right.
kenh

Thanks Sitas. It's a simple flemish twist string of about a dozen strands of jute, it holds up surprisingly well. I couldn't find any info about jute being used historically for bow or crossbow strings but given that it doesn't stretch and has decent strength I suppose it could have been an alternative to hemp.

@ Ken, haha, yes, the best of both worlds. A traditional appearance (minus the prod) with the efficiency of modern materials.

I'll have more pics soon, still looking for something I can improvise into a stirrup and bolt clip, might have to just go buy a strip of mild steel and put some elbow grease into it.

I'm thinking I will wrap the entire prod in hemp/jute once I've finalized it. I just want to hide that sleek black finish that the tension bars have. Sorta like this:
https://www.wulflund.com/image-service.php?id=1510⟨=en&img=img.jpg
c sitas

Hello X, I really like your thoughts on wrapping the prod and stuff. It looks good , surely "could have been period", and as a side note ,it's like a little insurance package should it decide to give up.It's amazing how much the wrap would pre date things.With just a little soil on it ---MAN. I guess you'd call that character ,Eh.
Gnome

Nice work, X. Are your nocks made of built up epoxy?
Gnome
Xamllew

Gnome wrote:Nice work, X. Are your nocks made of built up epoxy?
Gnome

I know most of you probably thought I gave up on it or something, truth is I'm unemployed and haven't had the funds to get everything I've wanted to do on this crossbow done, however I finally have enough of it done to show you all the progress. 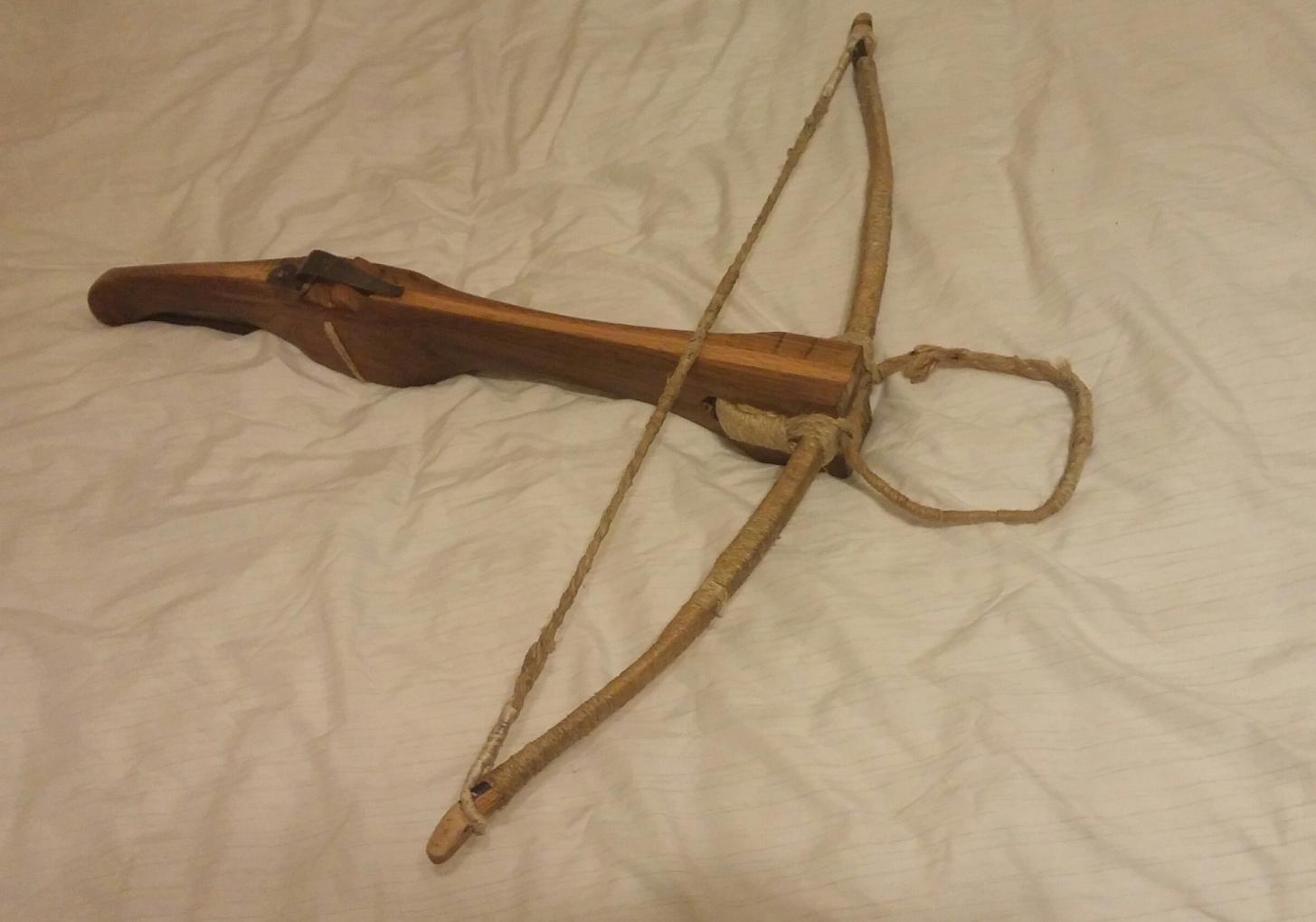 Here it is with the laminated prod all finished up and wrapped in hemp, the entire bow came out extremely solid. I've fired a couple hundred bolts so far and the first few strings I had on it were too light and tore to shreds after a number of shots, now I have a pretty thick string and it's served at the nocks so no signs of wear. The stirrup is just more hemp, I tried a steel stirrup but the steel bar I used was very problematic and was prone to bending as well as being uncomfortable to use with a boot or wide shoe. The hemp stirrup works well but is scary because although it's thick and I haven't seen any wear on it, I can just imagine it snapping mid-draw and having the entire crossbow come up and hit me.

I don't know the exact draw weight but I'd say above 150lb, my back muscles start to feel like I'm drawing my 75lb longbow by the time the string locks into the nut. Performance is impressive, blunt head bolts are going several inches through my target box which is made of nothing but stacked corrugated cardboard.

The only thing left to do is fill in a few cut marks in the tiller and finish it with Linseed oil. Video to come soon but no promises.
kenh

Thanks Ken, couldn't have done it without you. I definitely see more of these tension bar bows being made in my future.

Bracing the prod takes someone much stronger than me, but I made a nifty little stringer that goes around the epoxy nocks and allows you to draw the prod to brace height and slip on the string, so the epoxy nocks ended up serving a very valuable purpose. This thing was taking 10 minutes to string in the field before, now it takes about a minute.
Xamllew

One more shot in better lighting