Recently obtained an old Powermaster that I'd like to restore. Am I wasting my time? Lots of tales out there of broken prods, deaths and lawsuits. What's the truth here?
c sitas

Hello Rick, I'm not a lawyer but it's my feeling that if you have to ask questions like your's ,you may be underinformed about what you want to do. I've heard of people shooting their finger off with a 1500 dollar ,factory made  crossbow.Then try to blame the factory.Lets face it the things we play with here ARE dangerous and can loop off a finger , if your not paying attention. I don't want to sound like a jerk towards you but, this is how things really are. What your asking is for someone to say ,I'won't ,but I'll help you any way I can, as will about 25 other guys here who, might be more qualified than I. Main thing is be safe , use your head ,and have fun.
kenh

Wasting your time restoring an old Wham-O crossbow?  Probably not.  Depends on the condition of the wood and metal.

The Powermaster is, after all nearly 60 years old.  Prods can break, it's true -- old or new, metal or fiberglass.  ,  Wood can break too.  As with any dangerous hobby use caution, especially if this is your first time.

Tales are tales -- myths and legends.  Don't believe until you've checked first level sources (local newspapers, hospitals, etc) where these things are supposed to have happened.  I'm pretty sure some moron somewhere has shot himself in the foot or hand or other body part by being stupid.  Pay attention to what you're doing, where you're pointing the crossbow (loaded or unloaded), and never trust a so-called safety.
Geezer

Geezer here, once again talking about old Powermaster crossbows.  These guys are all 50-60 years old and were made with aluminum-alloy prods that shot great, but eventually wore out (either fatigued and bent or fatigued and broke) They can be replaced by aluminum (7075-t6) or steel prods available through a couple of vendors you'll find mentioned around here.  The earliest Powermasters had a simple notch and pushpin lock, but most of what you see has a steel lock with a top-housing and an automatic safety.  Pulling the string into the lock sets the safety.  Somewhere along there, Powermaster had some locks with insufficiently hardened sears.  Sometimes those would shoot as soon as you released the safety.  So until you're sure your lock doesn't have this problem, don't release the safety till you're actually ready to shoot.  Don't point the bow at anything you don't intend to shoot.  In fact, there are a lot of engineering problems with old Powermasters... the prod (bowstave) is mounted much too far beneath the bolt-track, which results in lost power and high wear on string serving.  The prod mounting is pretty cheesy and doesn't really hold the prod tight in its mounting.  Some Powermasters were made without a stirrup for spanning.  That's pretty inconvenient.  But despite these and other engineering problems, an old Powermaster can indeed be made to shoot rather well, mostly thanks to the very long power-stroke and efficient aluminum alloy prod.  You wanna fix one up and let it dance again?  Good for you.  Think before you act... think before you make 'improvements' and remember, this is a dangerous machine.  A little stupid will allow you to hurt yourself or friends.
As for breaking or removing fingers with a Powermaster: Hitting your finger with the bowstring will hurt, it will screw up your shot... you might even manage to break a finger, but losing a finger?  Not with an 80 lb. bow you won't.  A 1200 lb. siege bow might be a different kettle of fish.
So fly at it, but be careful.  If you're not sure, there are plenty of folks hereabouts who can give you all the advice you can stand.  Geezer.
rickraedeke

Thanks to one and all for your advice. I can imagine all the kids in the 60s who might have picked out one of these in the Sears or Wards catalogs for Christmas with the parents thinking it's just a toy for a little back yard target practice. Kind of like handing the kid his first BB gun. A Daisy carelessly discharged might leave a nasty welt, but a flying bolt is another matter entirely. The ebay auction where I found my Powermaster ($15.50 plus shipping) described it as a "1960s toy gun".
kenh

"Ralphie!  You'll shoot your eye out with that!"
JacobL

A good idea would be to go an buy a new trigger system for it, and remove the old one. Pre-made trigger systems for putting into hand-made speargun stocks are quite literally everywhere, so I'm sure there are some for crossbows as well. Besides that, you could easily make or buy a prod similar to the first crossbow you showed on here. If you do all that, it should work pretty well, and I'd like to see how it shoots.
rickraedeke

Strung the beast and tightened everything up. Using Chinese pistol crossbow bolts I could shoot consistent 6 inch groups at fifty paces with the iron sights provided. The steel tipped bolts penetrated the 1/2 inch ply board back stop with no problem. Accurate, powerful and fun.  I'm getting to like my Powermaster, not bad for the fifteen bucks I spent on it.
c sitas

Jacobi, I think the triggers your talking about mostly grip on the spear not the string. A different concept.
Sounds like your having fun.
rickraedeke

Yes, I'm finding out that crossbows can be fun. Fun to build, fun to shoot. I'm impressed with the quality of the Powermaster. Were these manufactured here or over seas? The cheap Chinese bolts I'm shooting fly fairly straight and hit hard penetrating the plywood board used for a back stop. At 60 I've found another hobby to enjoy, never too late to start something new.

Rick , yes they were made here but, that was before we had all the scum sucking lawyers. That bolt you show , I have no doubt, would be deadly  to a human at close range.  Be careful,and ya they are tremendous fun. It's a great hobby cause you don't really have to have many tools, and a lot of space to work in. I've seen a lot of people in foreign to me countries that are working in their kitchen or living room  or what have you. If there is a will they will find a way. If a person wants, you could almost trace this crossbow thing back to the start of time.
Geezer

The little chinese pistol bolts are a bit small for your big Powermaster bow.  Try making up some longer bolts, say 12-16 inches in length.  They'll be more stable and hit harder.  Also make sure the bolt's butt is right up against the string when you release.  You'll have better flights, with less instability and no misfires.  Enjoy!  Geezer.
rickraedeke

Found some bigger bolts at a flea market. 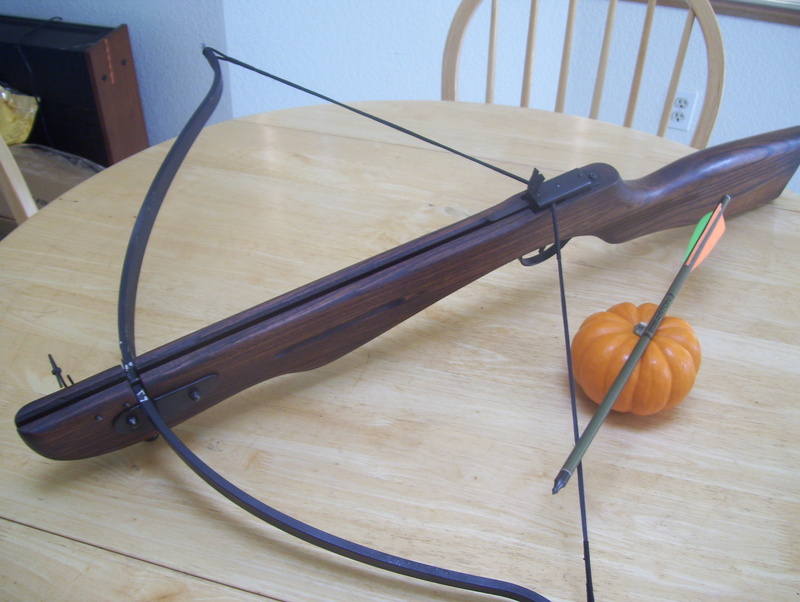 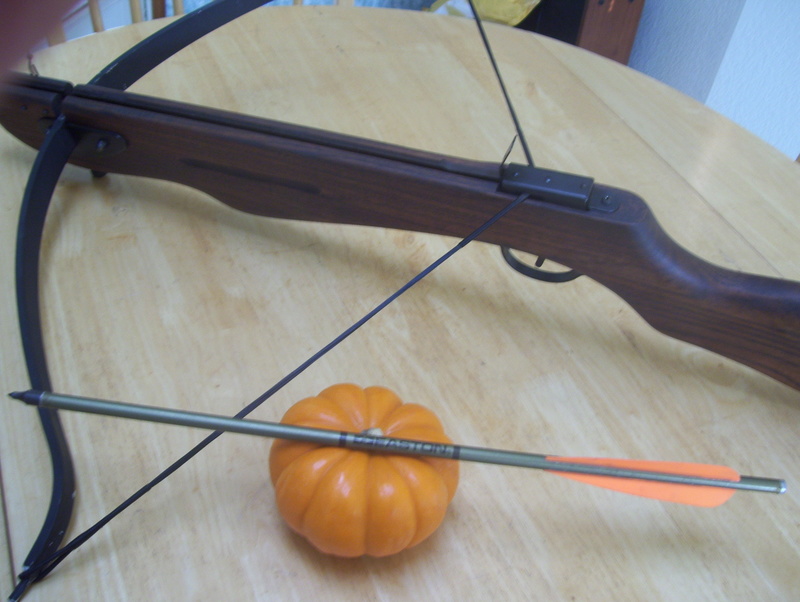 Yes, those should serve very well.  They are about the same size as the originals.  By the way, later models of Powermasters featured a simple stirrup attached to the fore-end beneath the prod. A stirrup really does help with pulling the bow nice and square for the best accuracy. Keep having fun.  Geezer.
c sitas

Rick , when Geezer mentioned accuracy it comes to mind that when you are cocked, you could tie a piece of string on each side of your trigger to mark your string. Then make sure you are evenly spaced. That also will help keep groups tighter.
Geezer

Yes, some sort of centering lines on your string will help you draw straight.  Geezer.
rickraedeke

Thanks for all the tips. As for accuracy, hitting the nine ring at fifty paces is good enough for me. Parkinson's retired me in 2012 and it was tough to have to hang up the old gun belt, as much as I enjoy shooting sports the noise produced by most firearms is nearly intolerable with my condition. The fact that the average crossbow makes hardly a sound is just what the doctor (neurologist) ordered in my case. As the disease progresses drawing the bow will get more difficult I'm sure. I'm surprised the Powermaster wasn't issued with some sort cocking device, my early model doesn't even have a stirrup. Picking up the crossbow bug at this juncture in my life has been real therapy for me and has provided me with much enjoyment. By the way if you would care to find out more about Parkinson's visit The Fox Foundation and pray for a cure.
c sitas

Rick , now is the time to make a whippie for cocking. Don't wait until you have nothing left in your body . They are very simple to construct, and work very well. Makes life a lot easier.
Sponsored content