Would like to buy or rent a Han Chinese Trigger

Would like to buy or rent a Han Chinese Trigger

Would like to buy or rent a Han Dynasty Chinese style Trigger
(Prefer modern steel as the material, but any material that can support 240lbs will do)
(Probably wouldn't use a Bronze trigger excavated, since they would be so old now) 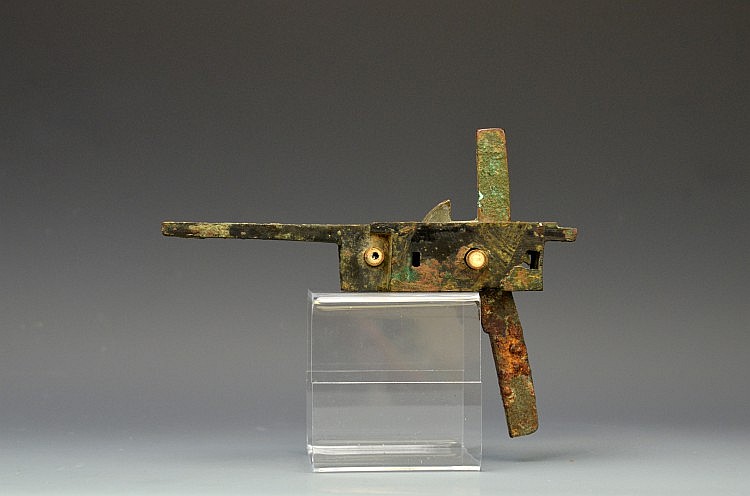 Context:
According to ancient records the majority of Chinese Han crossbows were around 400lbs with a long powerstroke (18"-25")
I would like to build one and I already have a 240lb @ 32" longbow prod. This will be the first prod I will use to build a Chinese style crossbow.

The main goal of this test is to find out the true penetration power of a medium draw weight, long powerstroke crossbow,
and I will be testing it against various types of armour such as medieval steel plate and wooden shields.
(main reason not using composite prod is the heaviest composite prod I have is 140@32")

The biggest problem I have is making the trigger. I tried making it but current not skilled enough with metal working
Thank you
Willing to buy or rent the trigger for this project, and I will publish my testing videos on YouTube.

(After I use the trigger I can return it to you)

Meanwhile here is a documentary I made about Chinese Crossbows

Chinese Crossbows are the oldest excavated based on archaeological evidence dating 600BC. (may change in the future if we find excavations elsewhere) These crossbows were different to European steel crossbows since they had a longer powerstroke. I am hoping to recreate a 400lb@25" Chinese crossbow, which has similar power to a 1200lb@8" Windlass Crossbow.

Keep in mind these long draw length crossbows mentioned above were a lot larger so it was more comparable to a small ballista, practical for sieges and wall defense. Multiple people were often used to span the crossbow with legs. The smaller Chinese composite crossbows were more compact for infantry use, but their draw weights are often heavier than what a man can pull with their back muscles. For example, 200lbs@26" would be a reasonable number for a Crossbowman in Han Dynasty China. These composite prods are made of a variety of materials, such as hardwood, horn, sinew, and bamboo.


The following documentary takes weeks to make and I hope you can support me by liking and sharing my video. Thank you!

I recognize your YouTube channel. I liked your video it was very interesting and straight to the point. I know I have made this suggestion before but, I can't possibly suggestion it enough. I think if you used Ipe for the core or the belly wood even if you don't want to use horn it would perform very well. If you did that along with a combination of backings sinew or fiberglass cloth over bamboo, Hickory or maple that would work very well. Maybe wrap it with birch bark or leather to protect it from humidity. I know they did that with later prods not sure about Han Dynasty prods but it's such an expensive object why not make the effort to protect it?
PierreC

Do you think one plasma cut from 3/16 or 1/8" mild steel plate would suit your purposes?

I worked up a quick drawing today of what something like that would look like in 3/16 plate with a piece of 1x2" rectangluar tubing for the frame.

The drawing's parametric, so I can customize the plate thickness and the gap between the claws by changing a couple of variables.

Once the local makerspace is open again (post covid) I'll probably run off a quick test-run on the lasercutter in plywood.  If the clearances work the way I want them to, I can pick up some steel and hit up a buddy with a CNC plasma cutter.  Then it is just TIG or braze in three pins and the tube and we're good to go.

As I see it, the rotation of the nut is limited by the claws hitting the sear pivot.  If you need the nut to rotate further to avoid string-jump, you'd grind the front face of the claws.  The lever on the one claw resets the mechanism.  The pin between the claws lifts up on the short arm of the sear, which resets it into the notch in the trigger.  It might need a spring to make the trigger self-locking.
Sponsored content