Just some thoughts and questions here. I recently bought a Horton Summit HD compound 150 draw crossbow. I have about 10 aluminum 2219 20" long bolts for it and plan to stock up even more as I can. These are only 4.00 US at my local WalMart superstore. I have read alot of other forum postings saying that wooden bolts will shatter and splinter when used in a modern crossbow. I may be wrong but I would think they would work just fine. If you look at the amount fo force from some of the meievel bows they pale in camparisson to the lighter modern bows. The only thing I can think of would be the acceleration of a compound crossbow being quicker than that of an old style crossbow. Maybe this initial force would cause the bolt to shatter.

Can not say for shure, but keep in mind those heavy medieval prods have a lot of mass so I believe they did not accelerate too rapidly. Also the bolts were short and very thick and made from hard wood not soft cedar. Have not explored the limits yet, but I am guessing if the crossbow shoots under 250 fps you might be okay.

Lets see what others have to say.

We'll try this one more time... Grumble-mumble stupid interface, thinks it knows better than I
MAny medieval crossbows were stronger than modern ones, but there are plenty of modern bows that achieve substantially higher velocities. As Todd has noted, medieval bolts were usually short and thick, made of hardwood (ash was considered optimal for war bolts, birch or oak were acceptable) Even lightweight cedar bolts should survive being launched from most modern high-velocity crossbows.
Hitting the target might be a different matter. Striking a hard target at an oblique angle at 350-400 fps might be too much for a long, cedar or poplar crossbow bolt, but again, a 1/2 diameter, 15 inch long ash bolt should take it all in stride.
Whatever the case, you're getting a pretty good deal at $4 per aluminum bolts. get plenty, the price will only go up as the dollar goes down-down-down.
Geezer.
Archer46176

That is kind of the plan Geezer... I hate to be a Chicken Little but I am stocking up on many many things...

I was thinking I would use nothing other than Ash or Hickory if I were to attempt this. I have not shot the Horton over a chronograph so I am not sure of its fps... I was also thinking from some of the books I have read while making my own wood arrows, that it would be wise to fletch the bolts so the grain was perpendicular to the string in order to lessen the chance of a split. But I also think if it is gonna split it is gonna split. I would like to think that my crossbows will only be used for hunting, or "other" soft targets but in todays world ya just never know... I think if I need to go up against a hard target I will use the Scorpio idea my cousin and I are tossing around...LOL...

Oh and I have some pics of my roughed out tillers I need to get them up on photobucket and will post the link as soon as I do.

I have heard this before, about not shooting wood arrows out of a compound and I always took it as gospel.

I had planned on writing a post about how it was a bad idea because compounds have a much higher initial acceleration and therefore cause the arrow to buckle more on release. But I decided to do some quick research to back up my “facts”. Turns out I was wrong, compounds do have a non-linear acceleration curve but it is actually end loaded at release. Meaning that compounds actually have the arrow accelerate slower initially and that is how compounds can get away with shooting such light and skinny arrows. Live and learn

So it seems that wood bolts might actually work just fine but I default to Geezer and Todds advice. Not too much to add, make sure the grain is perpendicular to the string, which is always good advice and a butt plate on the arrows wouldn’t hurt if you’re worried about them splitting or the string is narrow.

Sounds like you’re looking at good quality wood, which is going to help. If you’re worried about spine weight, then thicker bolts and shorter bolts will both help raise the static spine.

Something Something Dark Side
Master Bran Padraig 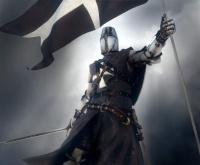 You can use wooden bolts on a 150 pound modern crossbow. I have shot wooden bolts from a bow just like that and seen many others do the same.

It's all about the size, strength, and mass of bolt you make. One option is to use Port Orford Cedar Heavy Spines. 3 Rivers Archery sells these online. Get 23/64" diameter shafts with a 95-100 spine. These cost $35 for 12 arrows. Cut them in half for a 16" long bolt so you will get 24 bolts out of these. Use 190 grain glue on steel field tips (for target shooting) sized for 23/64" shafts (you will need 24 for the full set, cost is about $10 for 24). You will need to taper the ends of the bolts to glue these tips on (there is a simple tool to do this if you never have). If your crossbow allows it, use 3 fletches at 120° otherwise do 2 fletches at 180°. You may need to slightly shape/taper the ends of the bolts to fit into the trigger release system. Setting the fletches so that the grain is vertical (crosses at 90° the string) can add strength/prevent splits like has already been stated. Bolts like these can handle 200 pound crossbows without issues but you need to use a good target. Any of the nice hunting targets that can handle 75-85 pound compound bows will do fine. If you are going to use really high draw crossbows (over 250-300 pounds) than custom made ash shafts are likely needed. I have never shot a crossbow over 250 lbs so I don't know for sure.

If you shoot at wood, steel, bricks, or other hard materials, your bolts won't last no matter what you make them out of.
Sponsored content