I've been haunting this site for a while, finally decided to be more social. I don't hunt and I'm not in the SCA, I do enjoy archery and melee sparring, and designing, making, and modding things. About 10 years ago or so I finally realized that if I never got around to finishing any of the many projects I'd started over the years, well nobody else was, either. I'd been dragging around about a half dozen swords and other medieval weapons I started making as a teenager, and it felt really good to actually see the finished product. The metal work led to woodwork and leather working, for the hilts and wrappings and scabbards, and I got pretty good at it. After finishing most of those, my eye lit on my old crossbow.

I didn't make it, one of my older brothers did. He died very young in a car accident and I inherited it. OK, "inherited" probably isn't the right word, I kinda just took it, but as much fun as I had with it as a kid, I know he would have wanted me to have it. I dug it out of the attic and , on close inspection and after doing a lot of research, I decided just to clean it up and leave it alone. The woodwork was nice and sound, but what I had always thought to be a steel prod was actually aluminum, with a hole in the middle through which a steel bolt secured it to the stock. I think it might have originated with one of those Jayhawk kits, or something like it, when I figure out how to host pictures on this forum I'll put one up of the trigger and see if anyone can identify it. Anyhow, I was lucky the thing never snapped on me, as the original steel cable did many years ago, in quite spectacular fashion.

So I decided to make my own, and I'm pretty happy with what I've done so far with the stock (I use that term because the tiller is definetly rifle-like) and also making up a prototype batch of bodkin-tipped quarrels, but I'm waiting for my steel prod and irons and whatnot to come from Alchem. And waiting. And waiting. In the meantime I just ordered a couple of 150# fiberglass prods to mess with. I might mount one up to the nice walnut stock my brother made, and definitely make another design of my own. Then I just need to find someplace in Atlanta I can shoot the things.

Anyhow, just wanted to say thanks for all the great advice I've already received, and hope to get more, and even better maybe help someone else from doing some of the stupid mistakes I've survived!

Sorry to hear about your brother, five of my friends died in a car crash about a year ago...guys were riding their new street bikes and some guy ran a red light right through their column. Great mates they were, sad story...I was actually supposed to come out and ride with them that day....try not to be superstitious after that. Well, we're all mortals and I can happily say that "if" something does go down...my younger brothers will inherit quite a few crazy nicknacks and a nice little shop. Wish I could spend more time with them now though.

Ok, enough with the sad stuff ... We're still here and got stuff to do....I like my coffee black&bitter with metal shavings on my toast.

Looks like you have good stuff on your hands and ready to roll. Definitely post pictures, I did a tutorial on that, as well as on how to post videos...all is included with this forum. 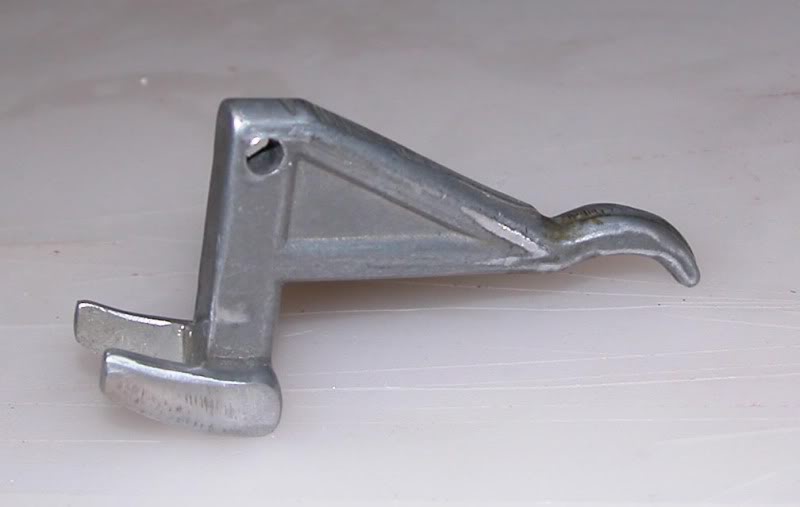 Cool, that was easy. The crossbow I'm researching was made sometime in the mid 1970s. This is the trigger it's cast aluminum. The prod is also aluminum with a bolt hole in the middle, and there are two aluminum rails embedded in the track. It originally had a steel cable for a bowstring. I'm pretty sure that's all there was to the kit. So I'm curious to find out where my brother got these parts.
jake-owa

Wow, what a weird trigger catch combo. I HAVE to see how that was mounted. I can't imagine the bow was very high draw weight.
Geezer

The aluminum crossbow catch and rest of the kit probably came from Jayhawk Archery, a mom and pop outfit in Oklahoma that sold only kits. I think there was another, similar kit available from a place in Petaluma California, but I don't know anything about them.
The kits were pretty awful in many respects: a steel string is a bad idea, and drilling a hole through the center of prod is really a no-no, but in fact, it was Jayhawk that made my crossbow business workable. When I discovered them back around 1982, their kits were $17, and eventually I bought just prods, without anything else for $13, and without the hole in the middle.
Eventually, @ 1985, Jayhawk's owners retired due to ill health and I started making my own aluminum prods, based on their patterns.
If you ever wondered why Alchem and Darkwood make 28 inch prods, it's Jayhawk's fault. Because the aluminum (7075-T6 in 3/16 in.) came in 144 by 48 inch sheets, that could be easily cut down to ten pieces, 28.8 by 24 inches. Each of those pieces can be cut into 12 (maybe 13) prods. So there you have it, one full-size sheet makes approx 120, 28 inch prods.
When Alchem started to make steel prods, they based their size and shape on the already-accepted aluminum Jayhawk prods. Darkwood followed suit, in order to meet the needs of medieval clubs, like SCa. Of course the medieval crossbow business has long since outstripped SCa, but the ground work is still there.
So it goes. Geezer.
Gnome

Thanks, Geezer, Jayhawk seemed the most likely source, but I couldn't find any images of their products anywhere.

The draw weight is pretty light, I never measured it but I would be surprised if it was over 85 pounds. Might have been more than that before I fired it a couple hundred times. You had to squeeze that release just right or the string would hop over the end of your projectile- a great way to strip fletching off off aluminum bolts, but otherwise useless. If I recall correctly, that was how the original steel cable broke, about 1980 or so.
Geezer

Jayhawk prods produced about 9 lb. per inch of draw when new (aluminum prods lose some spring after a while) with a maximum of about 8 inches of draw. Figure a maximum of @ 75 lb. Of course the heavy steel string and rub on the bolt-track ate a fair amount of that. Just smoothing off the nocks and fitting with a dacron string will help performance a lot.
Geezer
Gnome

The more I think about it, I wonder if the problem of string hopping might have more to do with the spring- there is a stout spring mounted vertically right under the prongs that hold the string. I have no idea what the pull on the trigger is, but it's pretty hefty, and gets harder the more the spring is compressed, closer to the point where the string is released. Maybe the mechanism just can't get out of the way of the string easily enough. A much lighter weight spring, just enough push to keep the piece in position when spanning, might be enough. Might need some kind of safety, though.
Sponsored content