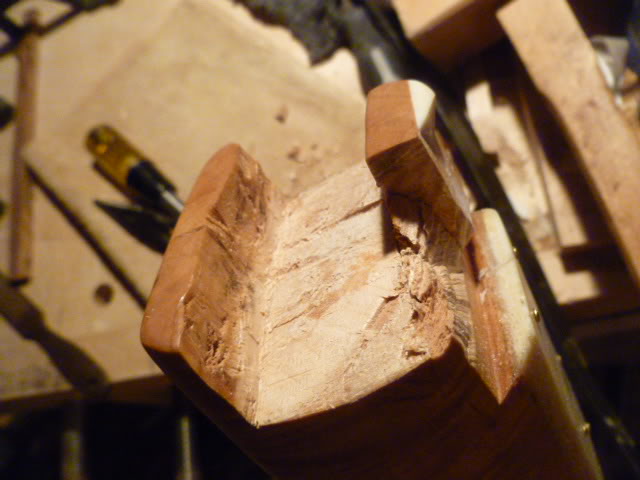 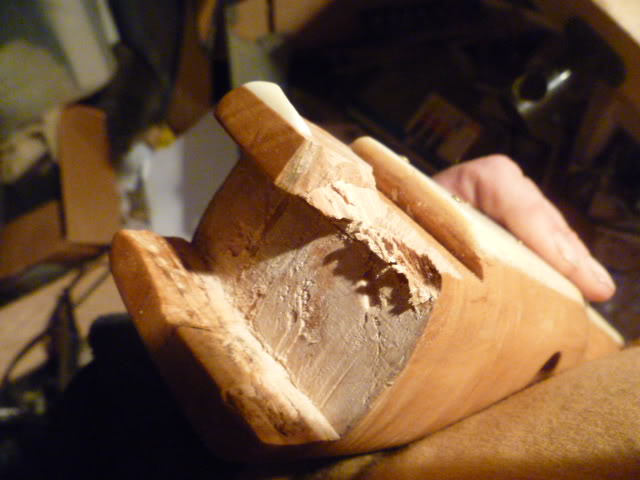 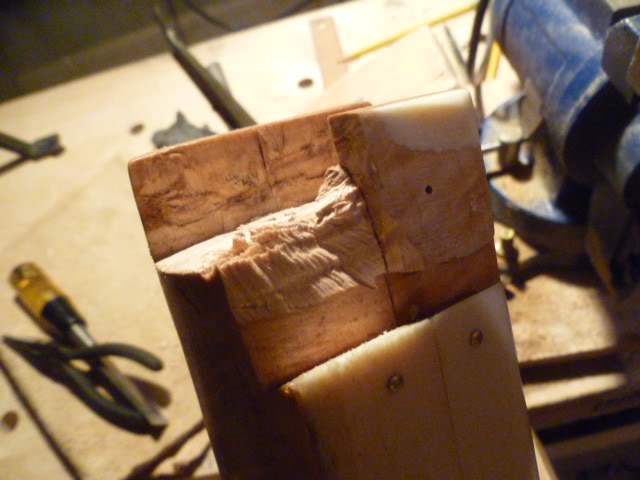 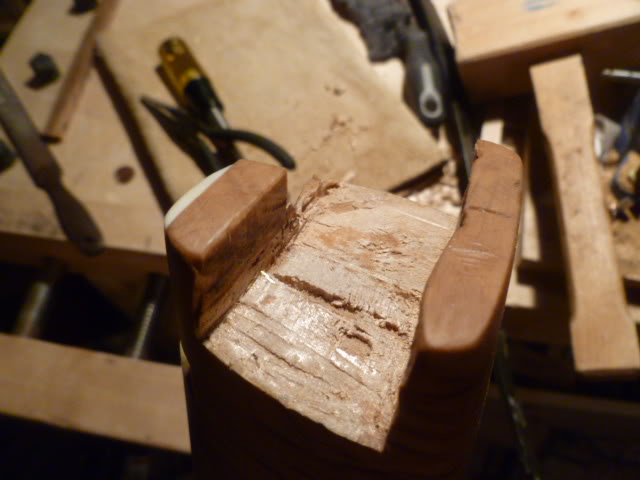 I think it is time for a post-mortum on this tiller.

I was worried that the prod socket was not deep enough, and so decided to deepen it about 1 bow's width, or about 3/16" of an inch. The bone plating on the very front got damaged, which I didnt mind, and was just going to replace it there after finishing the socket. No problem chiseling the socket to deepen it.

Where it all went bad was when I was prying off the damaged bone. You probably can see a lot of figuration, and it seems like wood with figure is very brittle. I am not a wood expert, and can't say why, but I did have to struggle with that brittleness as I was building the tiller.

As I was carefully prying up the bone, with about 90 percent off, wack, this entire chuck flew off and disappeared somewhere in the shop.

I am going to assume this kind of damange is not repairable, since so many forces are at work here. I did want some feedback, and maybe a tiny bit of pity.While I am not thrilled (I cant say how many hours I put into this project thus far), I do believe that this has some valuable lessons in there. My pug is sleeping happily next to me, and life goes on. Guess I will start planning my next bow tomorrow.

What you have there is still salvageable. Don't do anything rash.

If you are willing to clean up the break nice and flat and true, you can graft on some new wood. I would use a deep V joint....like a pool queue.

The basic structural problem stems (I believe) from making the dovetail groove to deep. If you add new wood, and keep the dove tail entirely within the bone facing, it can end up better than new.

Have a beer. Watch a video. Get a good night's sleep. See if it doesn't look better in the morning. If not, lather, rinse and repeat. It will look better by Tuesday, for sure.

I was once talking to a gunsmith on another (PCP Airgun)forum and asked him what now seems to me like a silly question.

The answer was straight though - I would rather have my gun break on me violently than leave things underbuilt and go out of tune later.

So while it does suck that things collapsed on you, but on the bright side it didn't break on you at full draw.

I agree with Mac's idea on the v joint...sounds like a very legit solution...and a beer with dinner and a good night sleep before the tackle is a therapy I myself would not turn down.

Also since we are on the topic and I'm not saying "I told 'ya so"...just my worst worries came true here. If you remember, we were talking about that dove tail for the bolt rest and me thinking it was a bit close to the prod socket...before posting I went through a bunch of photos of old bows to confirm the location of that bit. It was dovetailed into the top of the socket rather than behind it...reason I didn't say anything was because I saw your way of placing it as good engineering(riscky, but good) as it would be in the larger body of wood and wouldn't be effected by all the changes wood undergoes with time as it might have be it placed on the lip of the socket...turned out that crossbowyers made it the way they did for a good reason and "that" was in fact good engineering I have so foolishly missed the point of.

As for the curly wood being more brittle, there is a good book I can recommend called "Gunsmithing" by Roy F. Dunlap (ISBN 978-0-8117-0770-1). In it he talks about the variety of stock woods and a good part about it is curl...it's a tricky topic and can be quite a gamble as it is known for chaotic grain. Perhaps I'll sit down and quote the author on that part in the new topic.

All in all, I still think you're doing a great job and with some support and a breath of fresh air can take another dive at it. Wouldn't that be a spectacular sight when you pull out of this seemingly hopless situation with a successful shooter and a tale to tell at the range, ey?

Mac, great advice about a v splice. That makes me think of alternating woods, such as you see in pool cues. I will see what I have on hand, and make the dovetail entirely with the bone.

I did have two beers, Bass Ale since the Augustiner was gone.

I do recall that, Ivo. Now I know what to keep in mind for the next time, and there will always be a next time. I will see if I can source that book. Chaotic grain sounds like a very appropriate term. I didnt ever realize there was any of that in the board when I first started to work it, and know that it was either a blessing or a curse. Maybe both at once.

Today, I get to lay down a kitchen floor and configure a wireless printer. Next week, I will begin the repair job. I will let you know how it goes. Thanks, both of you. 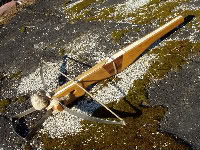 The "v" splice is a good idea. If you would make the front part from different kind of wood(for example nut wood), and you make some more inlays, it would be visible, hence decorative.

Other option is to cut off the damaged part(as small piece as possible), and remake prod socket. With shorter arrows and prod will be OK too...
stoneagebowyer

Thanks, Flippy. I dont know if trying to repair just the socket area is a good idea for safety and I am not willing to sacrifice performance with a shorter draw and brace height. Therefore, I will try a v splice, I have some cherry, and more maple, and even some lemonwood and osage, but I am sort of hording the degame, as it is soooooo hard to get hold of in the states. The lemonwood / degame would make I think a splendid tri-laminate tiller, with some light colored wood in the center. Mmmmm.

Remember, it is just wood and time, so if I can't pull of the repair to a high enough quality, it will make great kindling and I will still have all the hardware, the nut, etc. The time spend is not wasted ever in building these weapons. I will start a new weapon, in that case.