A client asked me to build him a crossbow for a game he and some friends were creating based on the video game Assassin's Creed's multiplayer.

He actually ended up not being able to get it cause his mom said no. BUT, I decided to build it anyhow cause I had already started.

It's based off of my original pistol (Penelope) just with a heavier prod.

I havn't put it all together yet but I'm so eager to share this with ya guys I'm posting pics of all the parts.

Here is the stock (is it called a stock when it's just a pistol?) 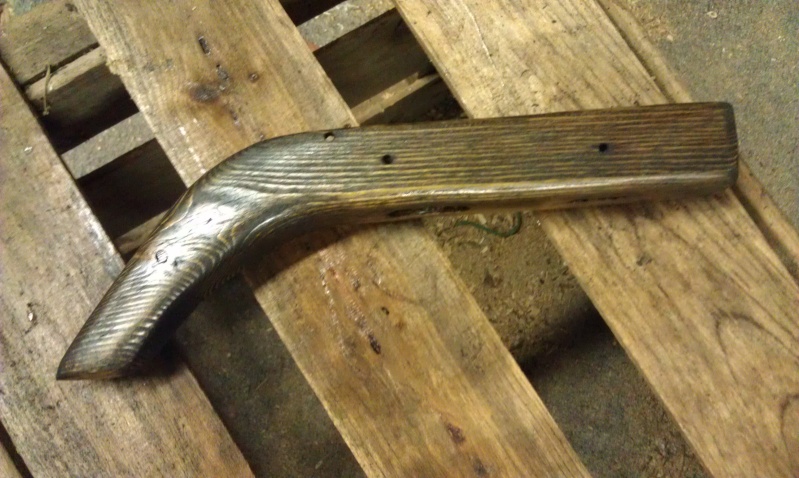 Still waiting for the enamel to dry before I go slapping everything together.

Here are all the metal parts. 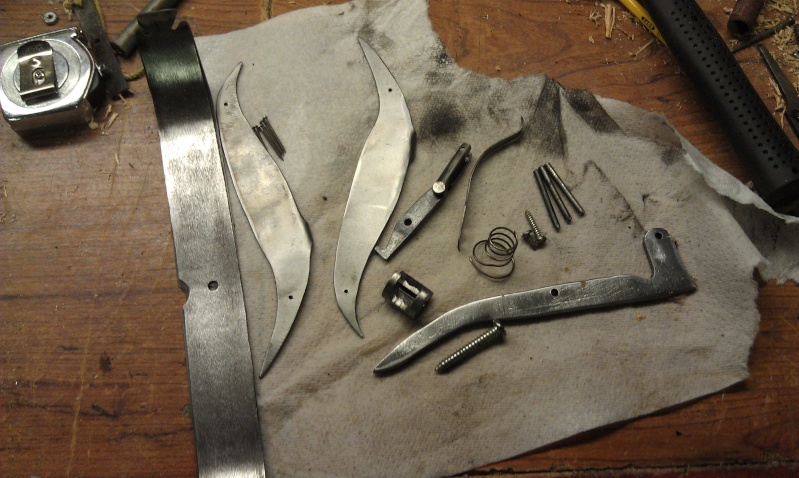 I think I will name him Odysseus.

Oh yeah, and here is an old vid of Penelope and how the trigger system works.

Here's what She looks like today, the prod has been made into a recurve, I added a groove and a tongue to hold the bolt in place. 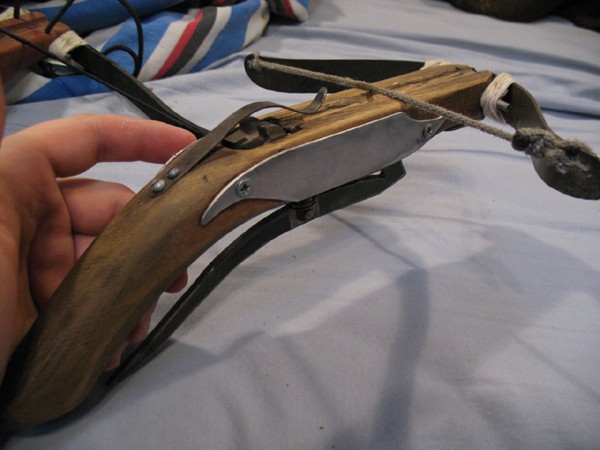 Oh snap, It looks better than I thaught it would. It also shoots wonderfully. 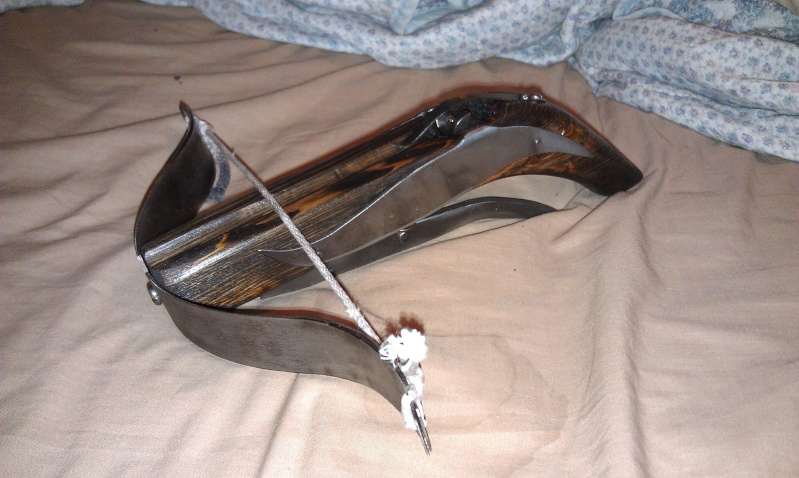 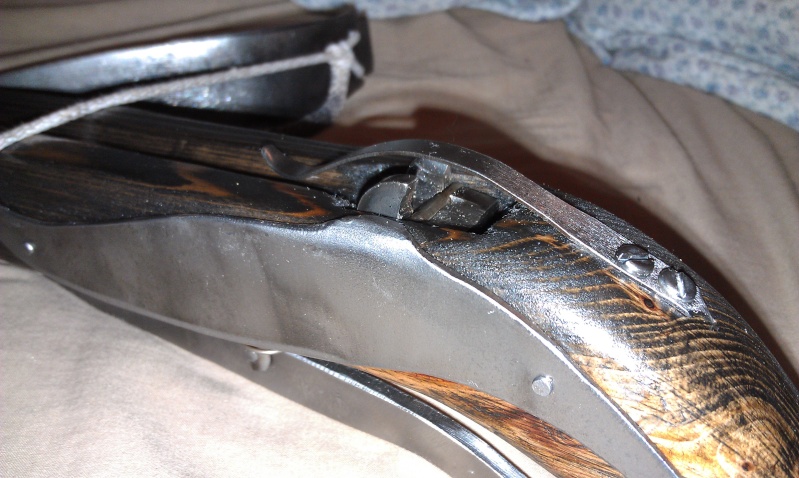 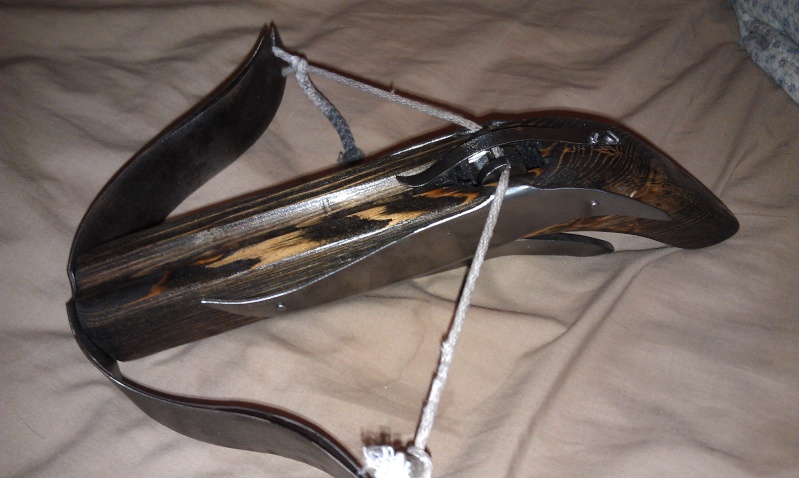 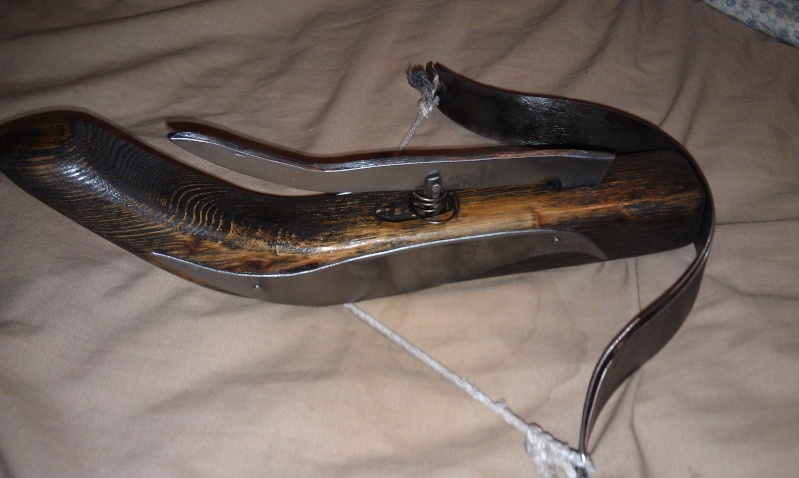 It does look good, so congrats on another fine build

Something Something Dark Side
blangas 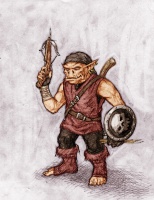 Abo this is very cool and a nice follow up to your outrageously good wrist bow. It has a bit of a steampunk feel to it, did you have this in mind when you began the build or that's just the way it panned out? I have been thinking about something along these lines for a while now. Pistol bows are just so much fun.

Would you mind posting a pic of the bolts you are using? Also what material is the prod cut from?

Speaking of steampunk, I stumbled on this nice little piece here, which focuses on the art more so than function however it still is a working crossbow.

I love the pic where the pistol looks like it's made out of zebra wood. And the trigger, I can't say enough on how much I love it...The only thing I'd like to see is sexier lines in this baby...lol, my weak spot.

Please don't take it as criticism, but perhaps I can speak my mind on a few touch ups that would put a brighter spark in it and make it a little stronger structurally.

PS: Blangas, I got some stuff done for you, really pushed my limits on this baby, think you will like.

only thing I'd like to see is sexier lines in this baby...lol, my weak spot. 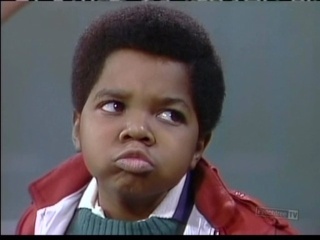 Would you mind posting a pic of the bolts you are using? Also what material is the prod cut from?

I havn't made the bolts yet. I'm gonna try to find some feathers and do the fletching myself. As for the prod it is made out of an old carpenter's saw.

I use those in a lot of projects cause they're cheap if you buy them at a thrift store. The metal is nice and flexible. I also use it for the tongue.
Ivo

But like said, sublime curves are my weak spot mate.

I'll send you the design over PM.

As for structural stuff...I actually wanted to ask before I go any deeper into what's on my mind.

The grain in the grip cuts off alot. Looks sweet, but it's not very strong and would be a shame if this bow dropped and handle broke off, so the question is - Do you have a dowel running through the grip? Think 1/2" oak glued in is a good start.

Other than that, I got nothing on you bro.