New here. Thanks for a very good crossbow forum.
How did he do this:
http://www.vidoevo.com/yvideo.php?i=bDZhUlNUcWuRpOVBnTkk&auto-bow-2

Can´t figure it out myself.
kenh

I didn't see any "automatic bow" all I saw was a lots of arrows hitting a target. I could do that with Photoshop too, sans bow...

There are a number of pump or lever action rapid fire crossbow plans and builds...
Oppenheimer

It might be so that it´s a joke filmed in slowmotion and then played at normal filmspeed. However I miss a thread like this one in the forum and most of the plans and homebuilt tries on internet seems to be crap.
On this forum I found a good example and on internet I found the full plan of the best drawing/plans I´ve seen for a while.
Its the "Repeating crossbow"-plans from Popular Mechanics.
http://www.vintageprojects.com/archery/crossbowfull-plans.pdf
Here´s a video of it: https://www.youtube.com/watch?v=lR0FXZe2_64

There must also exist at least a teoretical way to shoot more than one arrow from a loaded spring and divide it´s force on 2-3 shots before loading the spring one more time? Magasine feeding´s another problem.
JoergS

Obviously the breaks between the arrow target impacts have been deleted. That is easy to do with any modern editing system. You can really see
the small changes in the light between the hits.

I used the same technique in this video:

I made some repeating (slingshot) crossbows over the last few years, it is not that hard really. There are many ways. My pump version of the Shu Ko nu probably works best - 10 shots can be fired in under 5 seconds.
Geezer

Years ago, I made... I think it was 3 Shu-ko-nu Chinese repeaters. Best practicable rate of fire was @ 1 shot a second... any faster and things tended to jam up, and the bolts would hop out of the top of the magazine. "Accurate" shooting, in so far as that was possible was limited to @ one shot every two seconds.
Any truly 'automatic' crossbow would require auxilary power to cock the bow... in which case, why not simply have that power shoot the projectiles in the first place and save the trouble of building an actual bow with all its complexities? Geezer
Geezer

Oh yeah, I was gonna mention magazine feeding for repeating crossbows. Chinese repeaters use a gravity-fed top-loading magaine, though I have seen others, like Floyd Stevens' beautiful repeaters that loaded darts from a bottom mag. (Floyd lived in a little town on the outskirts of Austin Texas... I haven't heard from him for years. He might enjoy this forum)
Fletching is a real problem for magazine-fed bows... the feathers tend to foul one-another. It is possible to build fluted bolts that are partially cut away along the after-part, or to build bolts with very-very low fletching that spirals around the bolt over several inches. That will work well if the balance is right and the head narrow, like an old-fashioned bodkin-point. Large heads tend to upset aerodynamics, and turn the bolt around in flight, like the old Gee Bee racing planes. But that's another forum. Does anybody out there have any interesting solutions for magazine-fed bolts?
Geezer.
Oppenheimer

Thanks Joerg! Shall have a closer look of what you´ve built. Probably your slingshot-rubber is easier to use because it occupies lesser space than limbs on a bow.

About the movie in my first question: For a while I thought it had something to do with this danish guy because it was upploaded by another Danish https://www.youtube.com/watch?v=dKY9FpRGyJI
Oppenheimer

About your pointing at the fletching-problem Geezer. -How does an arrow react to only have two horizontaly mounted fletches instead of the normal three?
JoergS

My experience is that if a bolt is shot very straight and is sufficiently front heavy, fletching is not really necessary. For the distances I am looking at (max 30 meters), I could not really see any issues shooting without fletching.

Many (most) ancient crossbows did not use fletching. Wikipedia says that the fletching is the difference between bolts and arrows. Bolts = no fletching, arrows = fletching. This means all modern crossbows are arrow shooters.
Oppenheimer

Also thought about if it should work to use a 40 cm long coilspring for cars. It stores about 13 kilo/cm and let´s say you push it in 20 cm you coult portion out maybe 4 cm for the fist arrow, 6 cm for the second and so on... Offcourse you have to winch it up with some kind of winch the first time.

Regarding fletching it´s probably not nessecary on short distanses. Remember the fletching felling of my arrows when shooting at 10m but I hit the same spot with totaly naked arrowshafts using a 40 pounds recurvebow.
JoergS

The problem is that you would have to stop the accelerated coil spring at some point. That means you have to "kill" lots of energy - won't be easy.
Oppenheimer

you´re right. Two jumping-mat springs in serie/arrow maybe works better if not rubber is used but springs could be left under tension a longer time.
hullutiedemies

Using a single spring means different power stroke for each round. This requires a complicated gear system to compensate.

It is much easier to use separate spring for each round.
Spring mass/energy capacity is constant, so using single spring has no advantage.

Elegant spring shape would be reflexed blade spring that is spanned straight. Spanned springs coud be stacked to a magazine taking very little more space than a single regular bow.


Regarding fletching
Obvious solution is to feed arrows from a rack instead of simple stacked magazine.
This would allow the device to launch bolts of practically any shape or size.
Some kind of feeder mechanism is of course needed to pull the arrows from the rack in front of the string.

The ammo feeding rack could be arranged like revolver, comb, carousel or even linked belt. Depending on desired capacity and availability of components.

Other simpler possibility is the same that is used with dart firing tank gun rounds - a discarding sabot.
A fletched bolt is loaded inside a light weight tube. Once launched air resistance will cause the tube to fall back and bolt flies free to target. These could be shot with a regular chuko, as far as it has wide enough magazine and bolt groove.
Oppenheimer

Other simpler possibility is the same that is used with dart firing tank gun rounds - a discarding sabot.
A fletched bolt is loaded inside a light weight tube. Once launched air resistance will cause the tube to fall back and bolt flies free to target.

Im also in to this but will come back with the idea in another thread furter on.
About feeding from rack or magasine -subcalibre fletches need less space and lesser energy has to be spent on the feeding mecanism. 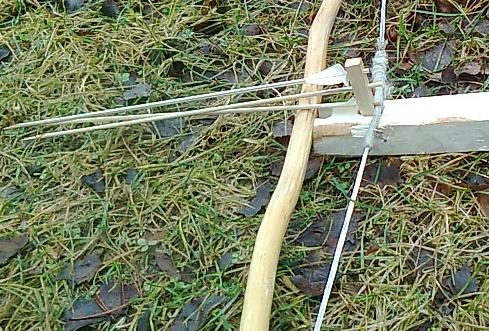 Crude low-power prototype for strip comb feeding.
This works with same principle as medieval javelin batting espringold.
1) String is pulled back and cocked.
2) Bolt comb is free to drop down one step.
3) When triggered, massive string slams the bolt off the comb

This system has been tested and shows promise.
Bolt speed is adequate to warrant further study.
Stonedog

Check this out....totally inefficient and cumbersome as all hell....

Oppenheimer wrote:New here. Thanks for a very good crossbow forum.
How did he do this:
http://www.vidoevo.com/yvideo.php?i=bDZhUlNUcWuRpOVBnTkk&auto-bow-2

Can´t figure it out myself.

Looks like bulls**t to me. He didn't show the bow. I think the film is sped up. The arrow hits sound kind of high pitched.

That was a waste of time and money to build. With practice, you could probably shoot about as fast drawing a regular crossbow by hand
kwandokun 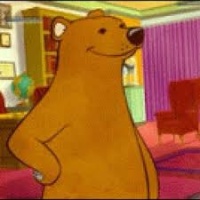 He had a legitimate reason for building though it seems.

If you read the video description, he built it due to his arthritis getting worse. 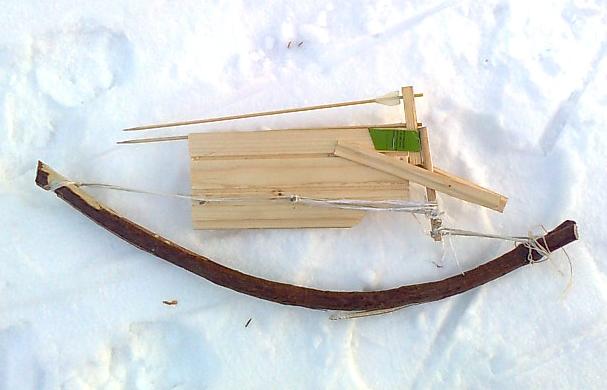 I guess this is not a crossbow. There is a bow but no cross.

Set to 15# this proto puts the 1.5g dart in picture through 32 sheets of newspaper.
A bigger version should be capable of hitting a moving target up to 20m with hunting weight bolt
Blade sword

I would like to get your opinion about this machine; I'm very intrigued about it since the dude doesn't show it completely


I believe making a full auto crossbow is feasible but kind of complicated; but something that is operated with a crank might work
Geezer

So what do we see here? A device that throws a lot of sticks in quick succession.. indeed nearly an unending stream. We have no idea how accurate it is and no idea how it operates. I'd say there's probably a spinning rubber wheel that kicks out each stick as it makes contact.
It isn't a crossbow, it isn't even a balista. It's a stick-shooting device.
Auto-loading and shooting arrow-shooters go back to Heron's Belopoeica, written in ancient times. He describes a large machine for tower-defense, that has a top-magazine and a chain-drive that cocks the mechanism, drops a bolt into place and fires automatically. Since it would be operated by people-power, it wouldn't shoot very fast, but maybe faster than all but a well-drilled catapult team.
Without outside power, you're not gonna get anything that shoots as fast as the device in the video. Years ago I worked briefly on a project for a TV show... they made an 'automatic' crossbow that used compressed air to span the bow... It worked pretty well, so long as you had a tank or a compressor, but left unanswered the suggestion that we just use the compressed air-tank to shoot the projectiles, leaving the prods out entirely. It would have shot faster and more accurately. So yeah, you can make all manner of arrow-shooting machines, but mostly they illustrate the advantages of expanding gasses in a closed tube for delivering high-speed projectiles.
Verdict... that's a fun toy, but not a bow my any description.
Geezer
Blade sword

I see; I thought it was some kind of crossbow since I spotted something that looked like a wooden bow just in front of the mag.
I saw that vid since a long time, but since I found this forum because I tried recently to find answers about such devices.
that's a bit why I'm asking about it
JoergS

I am with Geezer, there is no way that this thing propels the bolts with a bow. There is not enough time to cock the bow back, not even if you attach it to a car engine block.

I am currently in the concept phase of a crank operated repeating crossbow (using rubber of course). In theory, the crank could be motorized of course, making the weapon "full auto". But the firing rate will be low. I am hoping for 100 shots a minute (theoretically, magazine reloading not counted).
Geezer

Joerg: Years ago, I made a few Chinese repeaters, based on the plans in Payne-Gallwey's "The Crossbow" Maximum practical rate of fire was about one shot a second. You could cycle the machine a bit faster than that, but bolts tended to leap out of the magazine and accuracy went to hell in a hurry. I suspect fast-cycling rubber with some sort pushing-block, as well as feeding bolts into place will present you with similar problems, but if everything works right... yeah, you might get 100 rpm. I look forward to your next video.
Geezer..
Sponsored content