Hi, i have a question that crosses my mind from a long time how they did prevented the iron from rusting?

Putting aside the fact that from what i understand the iron/steel of medieval times was closer to our cast iron than steel, and i know as a fact (meaning books write about this) that iron have stronger corrosion resistance due to higher carbon percentage and different molecular structure, and putting aside the ''hot bluing'' or quenching in oil that gives that black finish how did they prevent corrosion?

I don't think they tempered armor for example so it was all about maintenace? Oil and polishing? Or there were some alchemy-like stuff involved?

Thank you in advance
Geezer

Medieval steel and rust... Medieval smiths were quite capable of making good steel... some of it was even crucible-steel imported from the east, but even local smiths could make good steel if they had the right materials... Steel made in and around Toledo Spain, f'rinstance, had a bit of nickel and chrome in the ore... so they could make really good alloys.  The thing is, good steel was expensive and it could only be made in small quantities.  That's why you don't see steel crossbows before @ 1350... because the steel 'industry' was mostly very small shops that couldn't make steel in big billets.  Typically the best medieval swords (and other tools) had good, hard steel for cutting edges, but the rest of the blade was made of lesser stuff.
It's likely that most triggers, lockplates, bow-irons, etc. were made from wrought iron or very low-carbon steel.  But good quality arrow points, the edges of tailors' scissors (not shears, real scissors) good quality knives, etc. were actually made of very good steel.
Outside oil-quenching and blueing, most armor-steel was painted.  just because we see it in the white (bare) in a museum, doesn't mean it was used that way.  (The famous/infamous English White Company of mercenaries were apparently so-named because they kept their armor bright)  A fair number of steel crossbows... like the Fels-Colonna bow in the Wallace Collection in London, had their steel prods covered with painted parchment, perhaps partially for decoration, but also for protection.
As for protecting run of the mill stuff in the white... your guess is good as mine... probably they treated it with something like linseed oil, that dries to leave a slightly gummy residue.  Otherwise, I suspect you just work your steel over once a week with oil and sand.  Geezer.
Spyro.Magno

I would have never imagined they actually painted armor!

I read on the forum of someone who used burnt wax... but i dont know how he did it, probably put it on the piece and then burnt it.
hoopslaboratories 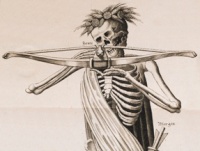 Here are the gentlemen over at John Neeman tools making a framing slick in the old world fashion. At around 2:40 you can see the application of beeswax while the chisel is still warm from heat treatment.
jds6

Greetings all
Steel and armor where protected by a variety of means. It did not prevent it from rusting, but prevented it from rusting past a certain point. One of the most popular was "bluing". There are two forms of bluing hot and cold.
hot occurs when the steel is heated and rapidly quenched instead of slow cooling.(water or oil).
the idea behind this is to create a thin outer layer that was impregnated with oil that would wear off in time but would slow down the oxidation process which results in rust. However this does not stop rust just slows it down.
Cold bluing is different all together. Instead of heat and oil, a chemical was used to cause the steel to rust very rapidly. (urine for example). Taking precautions to rust the steel evenly. Then oil was rubbed into the rusty metal. Let it rust some more, apply more oil,let it rust some more and so on. the end result on this process was a very deep black or brown surface that basically helped slow down the rust. But with each way one had to obsessively take care of the steel.
In my opinion the idea of armor and steel being all bright and shinny and mirror like is just for the movies!!!

Awesome video, gave me the chills!
Working steel the old way must be a terrific experience!

I know it sounds weird but im convinced that there is some form of genetic memory or something like this, for example i'm actually a machinist and i really can't stand working aluminum, plastic meaning : theyre awesome materials but they just don't give the same feeling and satisfaction of working steel, bronze or brass.

Anyway thank you jds6 i already read something like you said in some other place, i would like to give a try to the last method you wrote at least as a test sample, and see what comes out of it
Sponsored content