Somewhere i said that i was making a nut from a few big washers, and that i might make a whole thread about how to do it, and this is that thread.
...or would be if my glue held. 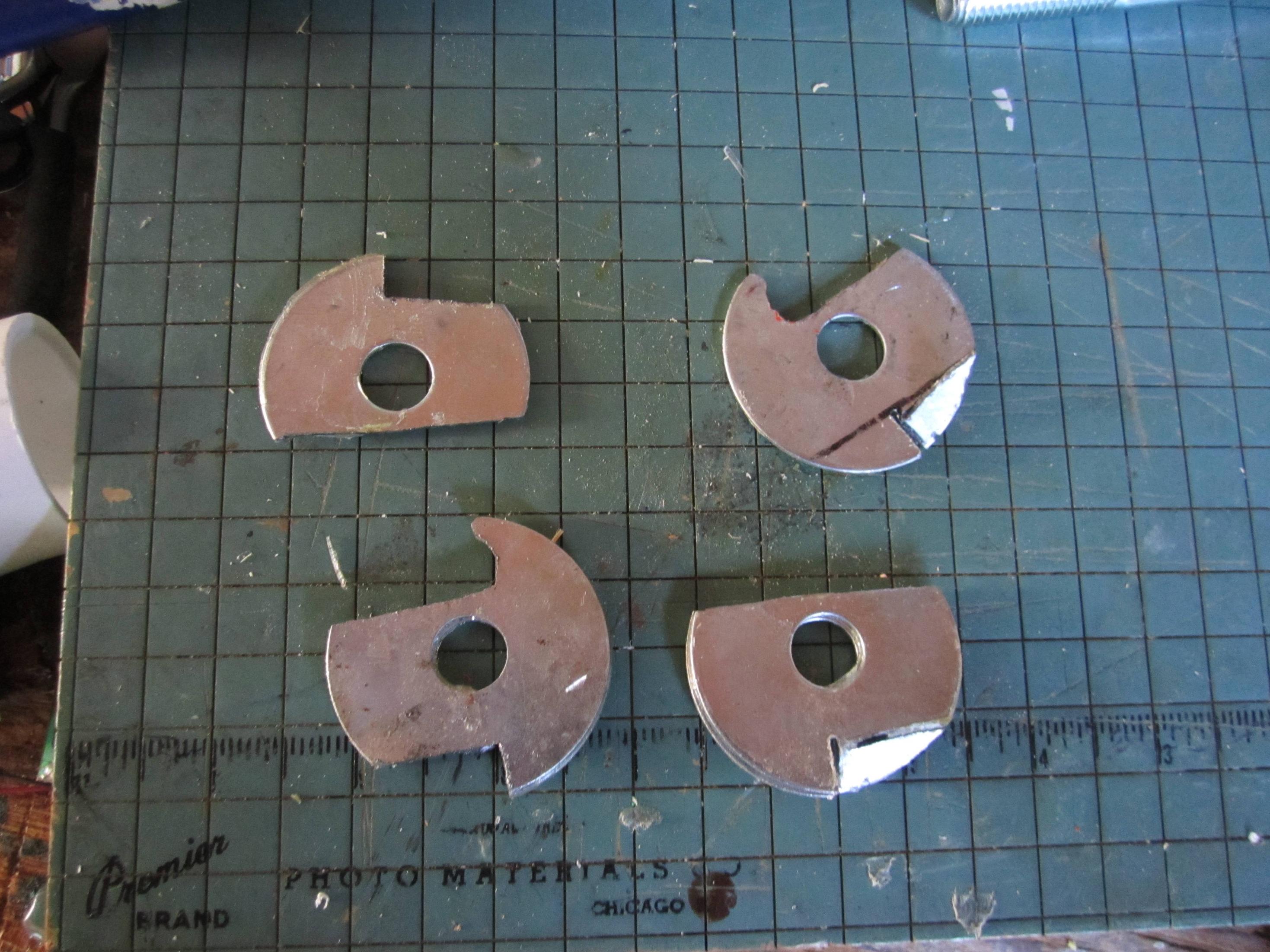 It broke as i was trying to cut out the trigger notch.
For the next time i think i'm going to use through pins and wood in the center to save weight.
actionbow

I made a mistake the steel is 3/32". Also it is the actual sear with the release bearing evenly on both the brass and steel of both sides. The brass wasn't enough alone for the 200 lb bow that I am trying to build for this project.

So far it is working well with the 100lb test/target limbs I have on it. It has virtually no trigger weight (maybe 3 lbs over 1" pull) which I expect to go up very little due to the design of the trigger/safety/anti dry fire itself.
PierreC

Geezer wrote:It WILL be very heavy, and tend to initiate misfires.

Would anyone care to elaborate on the misfires thing?  Is it something to do with the inertia of the flywheel or something else I'm missing?

I ask because I'm currently working with a quite heavy iron nut, and I would love to know about any surprises before I see them first hand...

The watermelon RTS stone-bow video was a real surprise to me (though more so for the poor woman operating the device...) now I'm wondering if I'm setting myself up for something tragic...
Gnome

Geezer wrote:It WILL be very heavy, and tend to initiate misfires.

Would anyone care to elaborate on the misfires thing?  Is it something to do with the inertia of the flywheel or something else I'm missing?

That's pretty much it, I believe. I have yet to accumulate any first hand experience with metal roller nuts, but I gather from basic physics as well as the reports of others that a heavy nut will react more slowly to the release, so the string is likely to get impatient and hop up over the teeth as soon as it can, which will often mean it hops up over the butt of the projectile as well. That's assuming the nut is too heavy for the application, of course, on a high powered siege bow the forces would be more evenly matched. Generally speaking, I'd say you want the nut to be as light as it can be without sacrificing durability, for optimum performance as well as safety.
Gnome
PierreC

So nothing that can't be overcome by constraining the path of the string to pass through rather than over the bolt then.  I can deal with that.
Geezer

"The watermelon RTS stone-bow video was a real surprise to me (though more so for the poor woman operating the device...) now I'm wondering if I'm setting myself up for something tragic..."
Geezer here:  Nobody has asked me why I don't make stonebows anymore.  It's cause I like my eyes in my head.  I cannot recommend making any double-string stonebow.  They occasionally shoot backward.  Bullet-bows with a barrel or slur-bows with a top-plate and single string should work safely.  Word to the wise.
Geezer

"So nothing that can't be overcome by constraining the path of the string to pass through rather than over the bolt then.  I can deal with that."
Geezer again:  Your supposition is correct in many ways.  Extra massive nut encourages the bowstring to climb out of the lugs on release.  An effective string-snubber should force the string to stay in line with the bolt.  You shouldn't have misfires.  An extremely heavy nut will still rob your piece of power and increase the lock-time, but it shouldn't misfire.
PierreC

Fair enough... My intention is to build a nut that can handle a 1000lb+ prod, I can strategically lighten it later, but I don't see a downside to constraining the string path to ensure a lack of misfires.

Currently, my list of things to avoid, in order of importance runs:

I'm still looking for any new things to add to that list.
actionbow

I highly doubt the string will climb over the nut on a 1000lb bow. You'd better use some hefty pins on that nut.
Gnome

A thousand pound prod? Holy cow! You need something to take out armored personnel carriers at a thousand yards? Yeah, I wouldn't like that "return to sender" scenario one bit!
With that kind of power, I don't think I'd be messing around with cast iron, either- too brittle. Solid steel would be the way to go. What diameter are you working with, Pierre?
Gnome
Geezer

Geezer here:  I've seen renaissance crossbows that probably drew @1000 lb. at @ 6 inches, that were fitted with bone/antler nut.  The stronger ones usually had steel reinforcing pins thru the lugs and down into the body of the roller, and at least on the big siege bow at Vienna (Kunsthistorisches Museum) the roller is quite large... perhaps 2 inches in diameter and wide.  But I think really good antler should be up to the task.  I've also seen some very powerful Flemish bows (there's one in the French Army Museum in Paris) that used solid brass or bronze roller-nut.  Again probably with a steel sear-block.  In fact, 1000 lb. isn't so very strong for later Renaissance crossbows, and in fact, the power produced isn't awfully great.  Probably no more than a strong police pistol... say 9 mm or .45 auto.
As far as cast iron rollers... yeah, I think I would stay clear of that for a strong bow, not because iron isn't up to the task, but cast iron of that sort was never intended for the job.  There may be lots of slag inclusions and the stuff can be brittle.
And not to be a noodge, but there's a reason medieval bowyers used the materials they did.  If you wanna make bows like theirs, maybe you oughta take a long look at their preferred materials.  If you wanna make modern bows, take a good look at what's available on modern material specs.  You should be able to make a lock that's plenty strong... but you may NOT be able to make a good one out of compressed dog-poop, reinforced with wallaby hairs or some other found materials from grandpa's garage.
Nuff sed.  Geezer.
Hermit

I have half a dozen or so 2" diameter by 1.25" long rounds of 4140 in my shop... A friend got them for me as drops that were left over from the bar feeder at his work. I suppose I could machine a nut from one of those, but I really hate machining the stuff, it makes my little Sherline milling machine work far too hard.

I arrived at the 1000lb figure mostly by looking at the sort of traditional crossbows that need a windlass, which I've wanted for as long as I can remember, and then cross checking against the energy output of a .45ACP... I think that with laminated steel limbs it should be pretty easy to get that level of power, and it might be doable with fiberglass.
Geezer

2 inches diameter is pretty darned large... it will have a fair amount of inertia, but if you're really looking at 1000 lb, you should have no trouble spinning the nut... and by the way, if the nut isn't pretty well balanced, it won't just spin, it will Vibrate like an old Harley Davidson as it spins round and round and round seemingly forever.  You might want to fit some sort of brush to the roller socket, to scrub off the spin, once it's fully released.
Geezer
DARIVS ARCHITECTVS

Use steel ungalvanized washers, and solder or braze them together.  Glue will not last since the bond to the steel will always prove too weak.  Why would you do this in the first place?
Geezer

Hey Darius:  Good to see you here... but in answer to your rhetorical question, some people just take a perverse joy in doing things the hard way.  Geezer
phuphuphnik

Hmmm, I'd clear drill all but the last one. I'd tap it and hold them together with 4 screws. You can countersink the first one to keep it flush. If you don't have a welder. That said, speedymetals.com will sell you just an inch of various materials.
DARIVS ARCHITECTVS

If you have to use metal (inefficient and slow to rotate), why not just spin one off on the lathe or cut it from steel roundstock?
Sponsored content

» A nut from washers, and the use of metal nuts in general
» Roller Nut Material
» Does anyone recognize this work?
» Nuts Are Us
» Crossbow nut questions