p { margin-bottom: 0.25cm; line-height: 120%; }
Could any of you upload a relatively simple crossbow lock? I am wanting it to have a gun like trigger, not a long tickler.
c sitas

Ben, go to the home page on here . Scroll down to crossbow resources. Go through that whole section very slow and deliberate. It has a couple of links to many ,many triggers. Take your pick.
kenh

Be aware that "relatively simple" and "gun-like trigger" do not necessarily go together.
hullutiedemies

Have you ever shot one of those Yunnan style "trigger actions"?  I still have the crossbow I was given by villagers in the highlands of Vietnam back during the war.  Hard trigger pull?  HECK YA!  Not what a modern person considers normal, that's for dang sure -- on the order of 20# pull!
hullutiedemies

Tested to about 110#
Very soft and smooth trigger pull.

Not the first one I have made. I chose it because I like it better than pin locks.
benjaminh123

Any round nut type locks, but with a rifle style trigger? When I say rifle style, I am meaning vertical trigger, not horizontal like a medieval tickler.
benjaminh123

How is this lock: 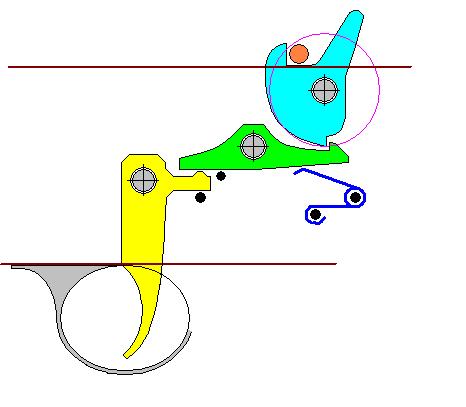 That would be a good choice. It would rather easy to fit a safety also.
benjaminh123

What about this one:

Is the one on the left, or the right better?
c sitas

The one on the right. Has hard faces and adjustment The pull would be more stout than the other one you showed.
benjaminh123

I have decided to go with the first lock; one more question though, is it better to lean more toward the angle shown in the drawing below (exaggerated of course in the drawing), or perfectly straight? 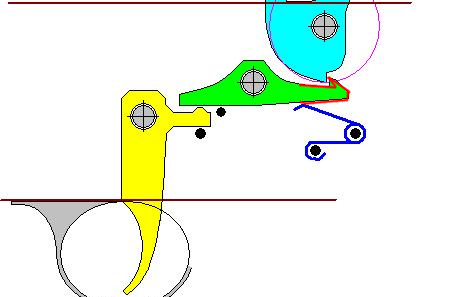 The angle on green piece and the one on the blue have to be perfect 90°. If they arn't you'll have all sorts of troubles,any thing from "it won't hold safely" ---to man I can't pull the trigger. Pay close attention here.
Hermit

All of the trigger designs you've shown have serious faults,but faults which can be put right.When the nut is released,it rotates with considerable force,and needs to be stopped in the correct position for re-cocking. In the series of 3 drawings 2 make provision for this,but the sear tip is going to take a hammering.The third(on the right)makes no provision for stopping nut rotation.
To prevent over rotation an extra notch in the nut which either contacted a stop,or compressed a spring would work. when building the trigger mechanism the best way to obtain the accurate relationship between the nut and sear would be to drill the sideplate sear pivot holes,make the sear over size,and carefully file it to fit.This would compensate for any inaccuracy in the positioning of the sear pivot holes.
Hermit.
benjaminh123

Thanks Hermit,
I had planned to make a stop so the nut would stop in a good position for reckocking; I am planning on going with the first drawing I suggested
Sponsored content