I was thinking about flipper crossbows lately.  If the swing arms are powered individually inconsistencies in the limb&pulley manufacture and the spring forces itsself could easily make one limb travel differently than the other. It would be the same as having a bow with uneven tiller.
Thats not good for accuracy. Maybe the error will be consistent so its no big deal? , but if not connected in some way  a bit of sideways force on the tip of the limbs could move the central point of the string left/right easily if you dont care for consistent spanning etc..  I was wrapping my mind around how  to synchronize the travel of the limbs in an easy way for this kind of device.

In regular compound crossbows this is achieved with cables but since the limbs are in fixed distance with no force between them cables are probably not the best solution.

you could make a cable system  if you use frontal pulleys but the additional cables will add weight and will have travel all the way back and also be in the way of the strings travel path. Inswinger has a greatier  string travel distance than regular crossbow so I dont think this is the best Idea. 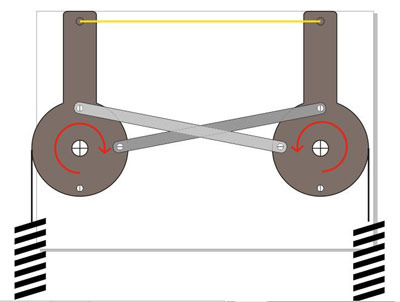 Maybe even a single linkage bar would be sufficient 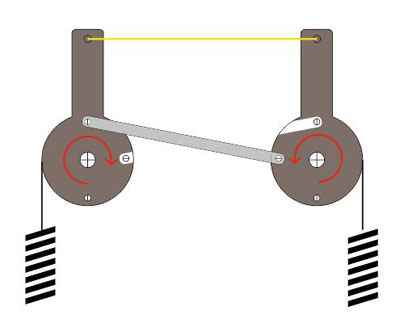 A split linkage with central pivot has the disadvantage that if you  put sideways force at the very tip of limbs  it could shift left/right. so its not much better than without if you dont have the central pivot restrained in a groove so it can just slide up/down  without side travel. 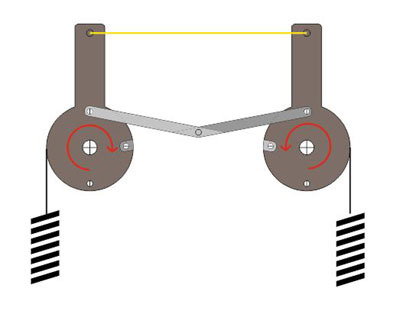 The downside of this (no1, No2) arrangement is that it gives only a 90° rotation at max.  you want the string to take the stopping force   so its even a bit less. This way the linkage bars dont have to take any great load and can be made from light material they are just there to even out any small difference in limb travel.
Any ideas of a linkage system that allows  for 120° rotation which would be as easy to implement? using No3 with the central pivot restrained from left/right movement  will do the trick but maybe there is other ideas I have not thought of?
I am still talking about individually powered limbs because this allows me to arrange the springs at the same plane as the limbs making for a direct force transfer.
A single spring under the stock would need redirection of force somehow, making for a more complicated build. I have thought about this also but  construction would be more complicated for me with whats avaliable  in terms of tools & materials.

If the end of the limbs is shaped like part of a circle (you dont need a full circle like shown here, its just ease of drawing) you will get consistent force from the spring throughout the whole travel of the limbs and angle of attack is always the same. I like this better than a straight bar for the limbs. I dont see a need for let-off in a crossbow. Springs dont have to point straight back, they can be fixed on the stock at one end, remember its just a concept drawing.


This is just what I came up with to adress the synchronizing of individually powered limbs, It may not be the best solution, just what came up first -  I am open for different ideas. I dont want to do it with cables if I can avoid it - these will have to be tensioned somehow and also might stretch after some shooting, a fixed linkage of some kind seemed easier to me.

Maybe I am overcomplicating things, but limb synchronization seemed to be a good idea to me. There have been a number of "flipper" style builds but there have been no reports on accuracy/consistency of  them.  If I want to build one I would like it to be as accurate as possible and I know from compound crossbows that if the cables are out of sync the accuracy suffers...
rolynd

I was also thinking about a  three bar linkage with the central short arm fixed pivotally in the stock - but since  both arms move inwards/downwards and  each of the grey links moves a different direction the travel distance does not match up. Geometrically impossible unfortunately. 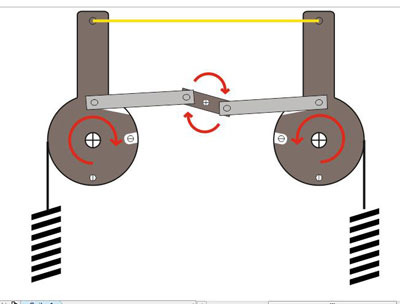 I have considered this problem too for when I "one day" build a spring powered swinger crossbow.

I think the simplest solution is to incorporate a small delrin bead or sled on the string serving that has direct contact with the arrow nock through the power stroke, and also runs in the arrow track

Minor power discrepancies between left and right limbs should then not be transferred to the projectile.
c sitas

Rolynd; I have a working bow that uses one power source. I use divers rubber. I put on as many as I want and shoot .I have to cock with a winch. Shoots as consistant as I can hold it on a bench. But I'm sticking more to the original design. My "springs" pull off the ends of my limbs.This thing pulls very close to 150 pounds.Using  your last photo, I'd eliminate the linkage. Attach a cable to each of your white dots. Put a idler pulley on the center support . Come from the white dot,around the idler, and end up at your single pull point.Do this from each side . I'm photo challenged or I'd give a pic.
Oppenheimer

Oppenhiemer, that is really a cool bow . The very idea eliminates a lot of problems. Did you see the price,and that's just for the bow, to be mounted on your stock. Also I believe by their rules ,you can only go up to 90 pounds pull for the target competition.
Andy.

The 10m match bows like Winzeler are impressive beasts. The sleds that engage the trigger definitely eliminate many problems.

Hank Roberts crossbows from the early 80's also incorporated a similar device, though theirs was more of a nylon "bead"

Strange that none modern sporting crossbow manufacturers use this system.
Oppenheimer

Also notice the german xbowsays eliminating vibrations well. Looking on the limbs it seems not to be prespanned? Thy are straight and therefore no vibrations left when the string reach the brace...
rolynd

Those target crossbows are definitely  some accurate pieces of engineering. Talk about pin-point accuracy at the competition distances. Thats proven fact and shows a sled will work  A sled would definitely adress  the synchronization problems.
But these competitions are held at 10m and 25m AFAIK and the bows are comparatively weak.  How would a sled behave  on a much stronger crossbow  for larger distance shooting?

I wonder if its doable with a homemade contraption to include a lightweight low-friction sled, have to think about that. Maybe including PTFE on PTFE which has  a very low friction coefficient and can be machined easily. A sled would have to have  at least some guidance , so its difficult to make a very short one. Also it has to be able to take the whole draw weight and  engage the trigger, so a complete PTFE sled would probably not be strong enough.  even if it were only about 10-20g  this would be at the higher weight almost doubling the mass at the center of string with a standard 350gr arrow...  flipper crossbows lend themselves to a longer powerstroke than regular crossbows so the added mass of a sled has to be accelerated  over a longer distance.
well, best would be to try  both the sled and  a mechanical linkage and compare - but I dont think thats gonna happen - I will have to decide  between the two beforehands. Add to that the differences in accuracy you get from using regular arrows ( I dont intend to shoot those  target bolts)
c sitas

Roylnd; You idea would be very doable .Espeacially if you used a Dloop to pull with. That way all the strain wouldn't be on the sled. I'm pulling over 150# right now with the D loop . I use this all the time in archery.
Sponsored content