Crossbow with built in lever?

Crossbow with built in lever?

I'm new to the world of ancient crossbows, but I'm interested in learning everything I can. Has anyone built a crossbow with a built-in lever or spanning device?
Onager Lovac

I haven't built one, but i would probably use this type of lever: 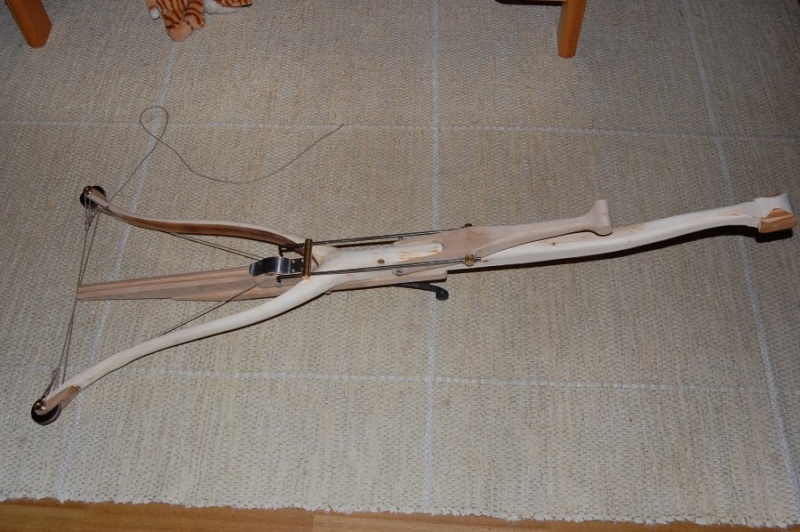 This one was made by someone here at the forum, don't remember who tho

Oh and welcome to the forum.
kenh

There is/was a style of crossbow called a Latch or Latchet, at least one version is of which had an built-in cocking lever:   http://www.todsstuff.co.uk/crossbows/crossbows.htm


There is a rather detailed build-along at the MyArmory discussion site, enough info that you could make your own if you work with metal; the thread includes a link to a YouTube shows Tod firing the bow repeatedly:

Wish I knew someone willing to make me this action!  Any takers?
kenh

There is also the Chinese semi-automatic crossbow called Chu Ko Nu or Zhu ge nu,  featuring a sliding box magazine, and an action that fires one or to bolts each time you complete the cocking action. You can find plans and build-alongs all over the Internet;  here are a couple from our files:

Thanks for the replies! Is the Cho Ku No powerful enough to be a useful weapon?
Geezer

Is the Chinese repeater strong enough to be a useful weapon.  I've built a few lite ones, @ 70 lb, but know of bows of the same pattern built to @ 125 lb.  That's strong enough to be really dangerous.  It seems the Chinese used them for point-defense: gates, hallways, etc. Years ago when I was in grad school, I saw photos taken at the Taku Forts (defensive works downriver from Peking, on the Yellow Sea) that showed Chinese repeaters lying about abandoned on a battlefield.  I don't suppose that actually proves anything: somebody could well have posed the photo to make the Chinese look stupid, but I figure all those machines came from somewhere... anr armory nearby perhaps.  So yes, I think you can make Chinese repeaters large enough to be militarily useful.  However, they are a bit bulky/unwieldy, for close-in use like a sawed-off shotgun or sub machinegun.  Not suitable for accurate shooting at distance targets.
Years ago, there was a crossbow builder in Arkansas who made a slide-action repeating crossbow.  Apparently they were available @45 lb. and 80 lb. with a small box-type magazine. (5 bolts?)
The best modern repeater I have seen was made by a guy who lived in the outskirts of Austin Texas. He made an aluminum-bodied repeater with built-in compound pulley arrangement. I think he eventually sold the rights for his machine, and haven't heard any more for years.  But I did once look up his patent online... It's there allright.  I had one of his repeaters in my shop for a couple of weeks, and took the opportunity to take some photos.  Geezer.
kenh

Effectiveness of the Cho Ku No would depend on what kind of "troops" you're using it against.  Well armored troops, not so much; but against unarmored peasant levies it would be quite effective.  The Cho Ku No was probably also used with poisoned bolts.  Not immediately effective, but if the enemy knows this, they'll avoid contact with troops armed this way if they possibly can.  Then again, the 'poisoned bolt' story may be one of the more effective pieces of propaganda...

If you'r into LARP and could create a LARP-safe version, I think a couple of these could rule a skirmish!
mb4

Interesting! I'm looking for something like the crossbow shown in this video:

The user seems to pull a lever underneath the stock to span the bow.
kenh

Same basic sliding action as the Latchet described above, but with the lever moved below.  IIRC one of the Latchet discussions here described the possibility of moving the lever to the underside of the tiller.

There must be a description/sketches of the Leonardo action on the 'net somewhere.
JacobL

Might be replying to an old thread but have you consider mixing both a goat's foot lever and a block and tackle system? It might end up being very compact and could (hopefully) fit within the stock of the crossbow. I believe I've seen a patent for a pistol crossbow like this
c sitas

Jacobie, It's odd we mentioned Jeep here. If you search here, he was deeply envolved in some kind of pagent , where he made a bout 10 or more of the Cho Co Nu. Used them for show and tell also shooting demos.
JacobL

I am tempted to learn more about Jeep, seems like he had alot of progress made. Do you have any links to the patents?
c sitas

If you just start going through whats listed on this site you'll find his stuff.And in so doing you'll discover an awful lot of extra things of interest. I'm pretty dumb on a computor, so I can't help with links and such.By the way, when you mentioned a built in cocking lever, I had a Barrnet  that cocked by breaking it in half.It was all right but I was not impressed with it.
JacobL

You're talking about the Barnett Commando. An interesting cocking mechanicm which is used on most pistol crossbows. Short draw length, so less power, I assume. An I believe I've found Jeep's crossbow. It is a bullpup design with and adjustable buttstock right? Seems very promising.
Also, as for a built in lever, here is a design used on a tennis ball shooting LARP crossbow: 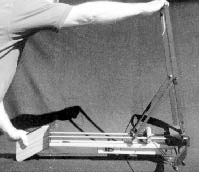 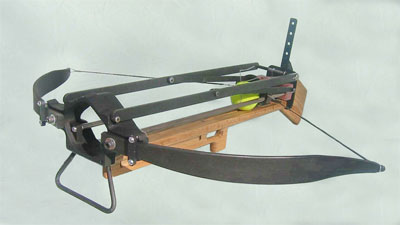 Seems interesting. I've yet to figure out how the string doesn't rub against the cockling lever when it is set down, though.
c sitas

I use the same design as the picture. I use this on one bow . The others I have use a removable winch between them. The way this one works is,when extended all the way forward the secondary lever drops down behind the string. When you push down on the main handle it pushes the secondary arms rearward. When you hit lockup, you relax the main arm and lift the secondary arm up and squeez it tight to the bottom of the main arm. At this pint you just let that assembly rest on a small stop at the rear of the stock. The catch that grabs the string sets behind and above the trigger.It's cumbersome but, it does work very well, and is trust worthy.I just made a small spring hook to catch the secondary lever and hold it up.Also this is for a standard bolt setup, not the ball deal that is pictured.
kenh

Short draw length DOES NOT mean less power.  It usually means a VERY powerful prod.  There are some massively heavy-draw bows -- 300-400# which have less than 6" draw length.
JacobL

C Sitas, very interesting. I will consider using this on my upcoming crossbow. Would it be better to have a push lever or a pull lever?

And KenH, you are correct. There are definately some powerful short draw crossbows out there, but I mean more of the pistol crossbow kinds. Short draw, low power. The prod is only like 80 pounds at full draw which is approprtiate I suppose but I havent seen one shoot over 230 FPS. I am very sure that if you put a better prod on it it could shoot much faster and far more powerful, though.
c sitas

Jacobie, One way to look at this is , If you pull you have to hold the front end down. If you push you can lay the front end down on what ever , ground or what ever. Get what I mean ? You always need some kind of extra support to help you. Depends on which way your the most comfy.I think if your up in weight I would opt to push. Just feels safer to me. My jaws and cheeks are good where they are. I 've seen failures. Still like the winch best of all. Just chicken ol me.
JacobL

I love using winches on ballistas. It's satisfying to crank it slowly back and then let her fly

although winches are very expensive for some reason, around about 60-70 just for a 400 pound model. Pretty dumb, but understandable, I guess.

And hmm, I suppose you're right. I've seen a video of a ball shooting pistol crossbow, and he had a cocking lever which was pulled towards him. He had to have a somewhat cumbersome arm brace, which I didn't like. Pushing, especially with the handle in a bullpup configration like in the photo I showed you, seems a much better option. How easy is it to bring the lever back up, and put it behind the string, to prepare for cocking? Just a single movement?
c sitas

Easy to hook up , but, with 180 or 200, you'll know you took a hold of something when it comes to pulling to cock.
JacobL

I suppose that's why the Cho Ko Nu crossbows  were a push lever. I'll keep that in mind, then. I really would like a crossbow with a great lever on it. Having seen rope cocking aids, I've pretty much experienced some of the worst cocking aids I've seen. So slow, and very finnicky as well, although some models alleviate that. I'd like to have a crossbow that has a small magazine, and can be cocked very quickly without moving it around, and shot just as fast. The push lever seems to solve that. Thanks for the help, C Sitas. I appreciate your advice

Crossbow with built in spanning lever

I knew that the da Vinci design with the sliding lock mechanism was beyond my skills. So, I made a lower tech design that works well. The difficult part was locating the correct points for the pivots. It shoots well.
Stock of cherry. Power Tuff 125 pound prod. Three axle lock. HDPE table with bolt grove. Spans easy and shoots well.

Crossbow with built in spanning lever 2 of 3

Hooks engaged on string. There is a wedge on both sides that centers the hooks on the string.

I have sent two other images, but they have not shown up as yet.
Sponsored content