Does anyone have cheap and easy ideas for weighing Rather high draw weights? by which im talking 300lb plus.

Ive recently cut out two potential prods from trailer leaf springs into different profiles, yet, they are so heavy in draw weight that i can not get an easy and accurate answer as what numbers im lookng at at what distances. I know the prods as they curently exist is far far far to heavy to be practical yet I would like the data so that i can use it help me plan/plot and make further changes (got to love R&D)

My old fishing scales are only good for 30kg and even after running it through a four fall sheaf block assemble im struggling to get it accurate enough at varying distance over 10cm due to the complex web of ropes.

Suspend your prod securely and then by using a string or wire overly strong enough, hang known weights from this until you reach your desired draw length. Individual pieces of metal, bricks, etc., can be weighed individually and then tallied up. A marked stick will allow you to see and reference the progress. Wrap the prod well with duct tape and drape it with an old blanket when doing this to help arrest it should anything go wrong! Bathroom scales may also be utilized for the job too, but require a more sophisticated setup. And keep your body parts away from danger as much as possible!

You can also make a device somehow similar to a windlass: just a couple of pulleys and a robe with a scale. 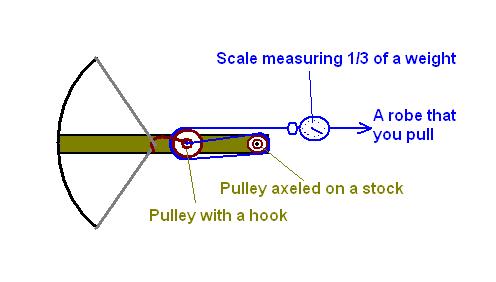 Also using double-pulleys can reduce weight to 1/5.
Pulleys are better to be with a ball-bearing, otherwise static friction will affect measurements(but not very much)..
Ivo

You mentioned a sheave block with four sheaves? I thought they didn't make them with more that three sheaves...any way...as Regerald mentioned - friction can be an issue...why not try less pulleys in combination with Pavise's brick idea.

There is also this one other way which may have been used back in the day to repeatedly span crossbows for a whole squad of crossbowmen(had an illustration somewhere...can't find it at the moment)...it's basically a lever only in our situation> lever with the scale attached to the longer lever arm....

Spoiler:
The Lever
The lever is about the simplest of machines, one we're used to
dealing with every day, from can openers to car jacks and millions of
other everyday devices. A lever is used to change the direction of a
force, and to apply Every lever has a fulcrum point, about which
the lever pivots. The two arms of a lever are not equal. A lever lets
you move a heavy weight with a small force, by taking advantage of this
inequality. By applying half the force on the longer side of the lever,
but moving it twice as far, we move the weight on the short side of the
lever. In the lever below, we can move a 1 kilogram weight half a meter
by putting a half kilogram weight on the long arm of the lever, and
letting it push down one meter:

The ratio of the long arm to the short arm tells us the mechanical advantage
of the lever, which is the ratio of work put into the system to work
done. If the long arm is twice as long as the short arm, the ratio is
2:1, and the mechanical advantage is 2. So we could move the weight with
half the force needed if we're willing to move our force twice as far.
This comes in handy when you've got a motor that can apply only so much
force.

...it's simple o-right, but In my opinion it's the most
dangerous one of all since it's technically a catapult that can snap
right back at you if something goes wrong.

...if you do proceed, please do so with great caution.

"...it's simple o-right, but In my opinion it's the most
dangerous one of all since it's technically a catapult that can snap
right back at you if something goes wrong. ...if you do proceed, please do so with great caution."

This is precisely why I suggested differently. Use the KISS principal and be aware of stored energy that can escape and maim you!

Something Something Dark Side
Riot

Cheers for the pic Regerald :-) I do believe I was using the sheave block wrong

(far to embaressed to say how lol). I shall give it another attempt on the upcoming weekend.

And thanks to Pavise as well, the blanket idea sounds rather easy and nifty, so ill put one in place, i'll even contemplate mounting a small bar over the top of the tillering board for some added peace of mind.


Im currently looking for draw weights at a an 8" (20cm) draw length, being new to steel bow making ive assumed that shorter draws = lower poundages and less forces being forced into the leaf spring....from a safety and newbi perspective. Although, i am tempted to try the draw length out at 30cm (especially ifi end up cutting to much steel out of it, arrived at the 30cm draw by simply halving the bow length as you would when making a regular archery flatbow)