Simple question, what is the minimum depth and width the grove can be to accommodate standard crossbow bolts? Also, couldn't I just trim the fletch if I can't get the depth needed?

The reason I ask is I am thinking abut converting my latest bow to accept standard arrows. I have been trying all sorts of combinations with 2 fletch arrows and I have not been very happy with the way they fly. Sure, I can hit a mark but sometimes the arrow strikes the target as much as 15 degrees off and will break a wood arrow or bend an aluminum one over 12". Under 12" and the flight is wild. I have some standard fletching and it looks like I am about one cm short of clearing the stainless rail so I am considering just cutting the fins down a little. I haven't cut the groove yet, just thinking about it...
jake-owa

Jake: You asked about cutting a deep groove to accomodate a three-vaned bolt in place of your current 2-vaned bolts. Two-vane bolts should fly very consistently IF the vanes are put on correctly and IF your prod is square in its mounting.
If your bolts are hitting the target badly off-line, something is off-square with your system. You could simply have badly fletched bolts... if you think that's the case, letter or number your bolts and see which ones are at fault.
However, it's likely the problem is in the crossbow or the shooter, rather than the projectiles.
You may be pulling your bowstring off center, or your prod may be off-balance, pulling more on one side than the other. That'll make your bolts fishtail or whirligig in flight. You can get an idea just what the bolts are doing if you sight down your bolt to make sure you're on target and then raise your head a bit without moving your point of aim. Release as normal, but pay close attention to the behavior of your bolt as it leaves the bow. You can actually tell if it's fish-tailing or whirligigging.
Changing to three-vaned bolts may solve some of your problems if your fletching-skills are a bit standard, but changing the fletching won't have much effect on an off-balance bow. I'd recommend you try to determine if your problem is a structural one before blaming the bolts, but marking and trying your bolts could save you some trouble over all. Good luck on it anyhow. Geezer.
Moon

can also have a big effect on arrow flight. I'm getting very good arrow flight with two 5" feathers (16" 2219 aluminum shafts) with only slight offset using a straight clamp fletching jig. Try adding heavier point weights and see if that helps, in addition to Geezer's recommendations, of course.
Basilisk120

One question Jake, Can you tell if the bolts are fish tailing or just flying like a drunk hummingbird? You may need to shoot at targets 30 to 40 yards away to really see it. I ask because I had a couple of bolts I made that just flew TERRIBLE. Just spinning in weird ways. I believe they were caused by a poor fletch job. Typically refletched and they flew fine.

I have used 2 five inch feathers, 2 three inch feathers(or what ever the bolts that come with Geezers and Lightly's crossbows), and 2 and 3 Razr cut feathers. The Razr are like 2.5 inches long and designed for compounds. The 3 feather ones had the 2 feathers at 180° and then one a little more forward (to clear the bolt clip) and at 90° to the other two, if that makes sense.

They all seem to have flown fine assuming the feathers were on right.

Something Something Dark Side
jake-owa

I put two quick spin vanes on short aluminum bolts, 8" with 125 grain tips, totaling about 350 grains. They fly crazy. They go straight and the vertical axis is fine but the back of the darts" fly around causing them to consistently hit above and below the target which seems weird with them spinning.

I guess I will try 15" wood shafts with the 125 grain tips and longer, wider vanes before I go changing the bow in ways that can't be undone. I know the fletching jig I made isn't working the best but I thought they would do better than this. My 12" arrows with home made tips and home cut feather vanes did far better than these. I guess it's mostly down to arrow length at this point but I will rework the arrows completely and see where it gets me.

I have reviewed the legal requirements for hunting crossbows in Texas and I think I have to make a new bow if I am going to hunt with it. One with a safety that is at least 25" long. I have the draw weight down but getting the rest legal is going to be....well, not really worth it.
Moon

I would not consider using

anything but feather fletchings for these crossbows.
jake-owa

I am starting to get that...thanks.
Basilisk120

Hey Moon why are you saying not to use feather fletching?

Something Something Dark Side
Todd the archer

Actually Moon is saying to use ONLY feather fletching. Translation was lost because the first part of his sentance is up in the topic part of his post.
Todd
Basilisk120

Something Something Dark Side
Moon

Sorry about that. I have a tendency to do that.
Ivo

Haha...gets me every time too, one of the things I love about Moon...keeps you on your "toes"!

Another example of similar fletching is currently seen on the modern TAC crossbows by PSE. 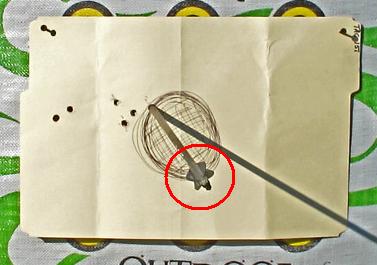 Perhaps it will be of good use when bringing a bolt clip into account...on the other hand it will be very interesting to see how a set forward fletch will effect the stability of the arrow in flight. If you do decide to do it this way...definitely drop a word on it.

Funny you should mention the TAC 15 bolts as I got to test one today. The fletching on it is unique. The two feathers on a one side are approx. 30° and the 2 sets are therefore about 150°. Of course the TAC 15 is a trackless design so not so sure how it would work with a more standard crossbow.