Question about the different materials used for fletching

Question about the different materials used for fletching

Hey all i have been wondering why other materials were used for the fletchings....wood, parchment, leather....is there any reason they used these instead of feathers? Feathers are plentiful so i didnt see a reason to do so.
Thanks,
Lance
mac

I have always used feathers, because that's what they appear to be using in the Gaston Phoebus manuscript illuminations.

My Pal Jim (registered here as 'silly person') makes bolts with wooden fletching. It's more trouble than fletching with feathers... though that might not be the case if he worked on an industrial level.
When we see fletched bolts in medieval armories, like those in Westphalia, they're almost always wooden-fletched. Why? Because bugs eat the feathered bolts. So it's just possible medieval armories actually preferred wooden, parchment, or metal fletches because the bolts could be stored in good shape for years at a time.
I wouldn't be surprised to learn sportsmen tended toward feather fletches for light weight and accuracy, but who knows at this point?
Geezer
JMC 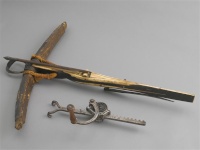 generally, the pen was used for hunting, as currently c'es pen found on the tiles for marksmanship, for war is the wood or leather.
I use wood for my bolts, with powerful crossbows, thefeathers resist evil.

Geezer does make a good point in that we may never know why it was done in the past. All I can say is what has been figured (re-figured?) out now.
http://archeryreport.com/2009/10/fletching-review-speed-drop/ is a nice test of various fletchings including feathers. To sum up the relevent bits. Feathers are the lightest fletching on the market and therefore have the highest initial velocity but because of the higher drag they slow down faster than other fletching. Of course the higher drap is what makes them ideal for finger release shooting as they stabilize faster/better than other fletching.
To extrapolate the data out bolts with tradional non-feather fletching (wood, leather, partchment etc.) may could have a speed advantage at longer ranges compared to a feather fletched bolt. And with crossbows having a consistant mechanical release the extra stablizing effect of feathers may not be needed.

Of course, was this common knowledge back in the day? It wouldn't be too hard to figure out but who knows without period documentation.

I'm getting a little off topic here, but it's actually very true (if you believe in it). The feather is a very nice symbol and has been used in cultures to represent Truth, Wisdom, Speed, Lightness, etc. and were a symbol of Sky Gods of Thunder and Wind...over all resting with one meaning that majority agree on - Purity.

There is a fun article on Feather Symbology here: Link

Symbol meaning of feathers deal with ascension and spiritual
evolution to a higher plane. Feathers were worn by Native American
Chiefs to symbolize their communication with Spirit, and to express
their celestial wisdom. Also in the Native American Indian
culture, feathers represented the power of the thunder gods, along with
the power of air and wind.

Native American Pueblo Indians would pay homage to the Feathered Sun which is a symbol of the cosmos and the center of existence.
Another symbol meaning of feathers also revolves around prayer, and
the Pueblo use feather sticks as they dance in prayer for rain during
solstice rituals.

As a
Celtic symbol meaning, the feather was worn by Druids in the form of
ornate feathered robes. Celtic Druids donned these robes in ceremonies
to invoke the sky gods and gain knowledge of the celestial
realm. It was believed that the feathered cloak along with the presence
of the sky gods would allow the Druid to transcend the earthly plane
and enter the ethereal realm.

The Egyptians believed that feathers were symbolic of sky gods too. Ma'at, the Egyptian goddess of justice, would weigh the hearts of the newly dead in the underworld against the weight of a feather to determine the worthiness of his or her soul.

In Christianity feathers represented virtues. In fact, an
image of three feathers were made into signet rings - each feather
symbolizing Charity, hope, and faith. These rings were worn as a symbol
of a virtuous soul - they were also used as wax seals. The ring would
be dipped in warm wax then pressed against documents to seal the
closure. The recipient would know the documents came from a virtuous
man by the indication of the three-feather symbol in the wax.

In dreams feathers mean travel or the ability to move more freely in life. White feathers in dreams indicate innocence or a fresh start in a spiritual sense.

A quick summary on symbol meaning of feathers:

I hope you have enjoyed this page on symbol meaning of feathers.

So every time I see a girl with a feather tattoo, there is a great chance she won't like me at first.

Basilisk, thanks for the link.

Aerovane (Firenock): Aerovanes are touted as some of the most
technologically advanced vanes on the market. They have a profile
derived from owl feathers for quiet flight complimented by a recess on
one side of the vane and a bump on the other that in combination impart
spin to the arrow. There are different textures applied to the
different areas of the vane to help increase the performance.

...Yeah, yeah, y'all know everything, I see. Well then, I'm sure you
know that owls have silent flight. They are the B-2 Stealth Bombers of
the animal world. Ok, smarties, if you know that, then can you tell me
why? Can you tell me anything about the pile on the dorsal surfaces of
inner vanes? Ha! Didn't think so! 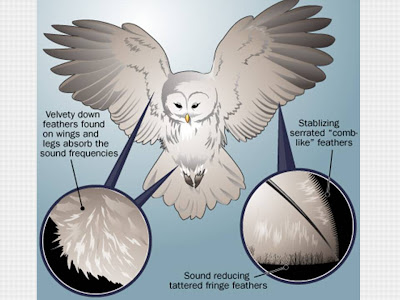 The
most unique adaptation of owl feathers is the comb-like or fimbriate
(fringe-like) leading edge of the primary wing feathers referred to as "flutings" or "fimbriae". With a normal bird in flight, air rushes over the surface of the wing,
creating turbulence, which makes a gushing noise. With an owl's wing,
the comb-like feather edge breaks down the turbulence into little groups
called micro-turbulences. This effectively muffles the sound of the air
rushing over the wing surface and allows the owl to
fly silently. There is also an alternate theory that the flutings
actually shift the sound energy created by the wingbeats to a higher
frequency spectrum, where most creatures (including prey and humans)
cannot hear.


Most owls have relatively large, rounded wings. The wings are broad, with a large surface area relative to the weight of the bird i.e. a low wing loading. This allows them to fly buoyantly and effortlessly, without too much flapping and loss of energy. They can glide easily and fly slowly for long periods of time. Many species use this slow flight to hunt ground-dwelling prey from the air.


Other
areas on the owls' wings and legs are covered with velvety down
feathers that also absorb sound frequencies above 2,000 hertz. All of
this makes owls completely silent to their prey.


Below is a picture of a Barred Owl feather on the left and a Mourning Dove on the right. Do you see the comb-like or fimbriate (fringe-like) leading edge of the primary wing feathers referred to as "flutings" or "fimbriae"?
This is what NASA researchers have been looking at to incorporate
owl-feather-inspired technology to dampen sound in aircraft. Engineers
are trying to come up with a design that does not create extra drag when
aircraft have reached cruising speeds and altitude. Major airports
like O'Hare and Heathrow have requirements on the amount of noise per
day an air carrier can generate. If they can reduce the noise, there
can be more flights coming in per day. It is hoped that these ideas
will get an airplane quiet within 20 years and even more quiet within
20-50 years.

To add a bit to the discussion and hopefully shine a few lights under a different angle...Basileus has been updating the Wiki and I've been checking in occasionally to see if there was anything I could add(the guys is a very nice writer

) and he's updated the fletching section with tutorials on various fletching techniques/materials he used. Check it out and see if there is something you might add or want to ask.

Sorry for the double post here...(If I try to edit my previous post everything gets screwed up and pictures are lost since I just dragged.dropped it from the original site > one time operation)

Kangaroo skin is used to make items which need to be strong but flexible—it is the material most commonly used in bullwhips. Kangaroo leather is favored by some motorcyclists for use in motorcycle leathers specifically because of its light weight and abrasion resistance.[3] Kangaroo leather is also used for falconry jesses and soccer footwear.[4]