Last winter, I found myself reading a wonderful book by historian Juliet Barker called "Agincourt: The King, The Campaign, the Battle." I've always been a military history guy, and when I was younger I built quite a few basic models of trebuchets, torsion-powered "onagers", and other old siege devices as a practical application of my reading. Barker's work, however, spends some time (though not as much as I would have liked) giving an overview of the weapons involved at Agincourt, including the longbow and crossbow. Her conclusions on these weapons are completely unsurprising to anyone who has read up on missile weapons of the period - longbows were incredibly effective in trained hands, but crossbows made less carefully trained men into fairly deadly soldiers as well.

The writing, however, got me started on a little mental experiment. As a (very, very) amateur carpenter, I wondered if I could put some solid metal to wood in search of a personal experience with just what Barker's conclusions meant. In my experience as a history student, academics often have little experience with carpentry (let alone ancient carpentry, which is a whole different ball game from anything I'm familiar with) or shooting, and hobbyists often don't apply the methodical footnoting, primary source study, and academic technique of the historian. What is left is a wide gulf, where hobbyists with so much to offer the field and historians with all of the tools to turn the findings of enthusiasts into citable research are left without enough contact.

With this in mind, I set out to build a very basic crossbow and see how well I could learn to shoot it in a short period of time compared to a hand bow. I did all of this last winter, when I knew significantly less than I have learned since, so the crossbow looks (to my newly enlightened eye) very basic and occasionally ill-conceived. It is made of oak, with a thin strip of black walnut as a middle piece to add color variation and make it easier to install a tickler. The nut is Delerin and the trigger a polished version of the one that Alchem sells. The bow is a cheap #120-150 Chinese fiberglass one, and I selected it for low cost and performance that would allow me to engage targets at about 40 yards. I opted to simply sight the crossbow off the top of the quarrel clip and the tip of the quarrel, which, using the very light aluminum quarrels that I got on ebay, gave a pretty good POI at 40 yards.

It should come as no surprise that the crossbow was extremely easy to use compared to the bow. With rudimentary sights and a well-adjusted sear, the crossbow hit extremely consistently at any range. The hand bow, a vintage Ben Pearson Cougar with draw weight of 40# @28", was much less willing to yield such consistent results, and after 100 shots or so, my fingers had just about had it.

My first foray was by no means scientific or comprehensive, but it was the proof of concept that I needed to justify a more thorough project in my free time in the next few months. I am planning a new Central European sporting bow with a 200# Alchem prod in the month or so to come, and I'll hopefully have learned enough since December to build a much more period-correct bow for my further inquiry into this amazing little weapon of antiquity. This tinkering has allowed me to flesh out what had been mostly just intuition, and I'm glad I got to see my reading come alive through the results I achieved on the range. I have no doubt that my next project will be a fun challenge for me, and I'm excited to share the results of greater attention to detail and more careful materials selection in the second go when I finish it! 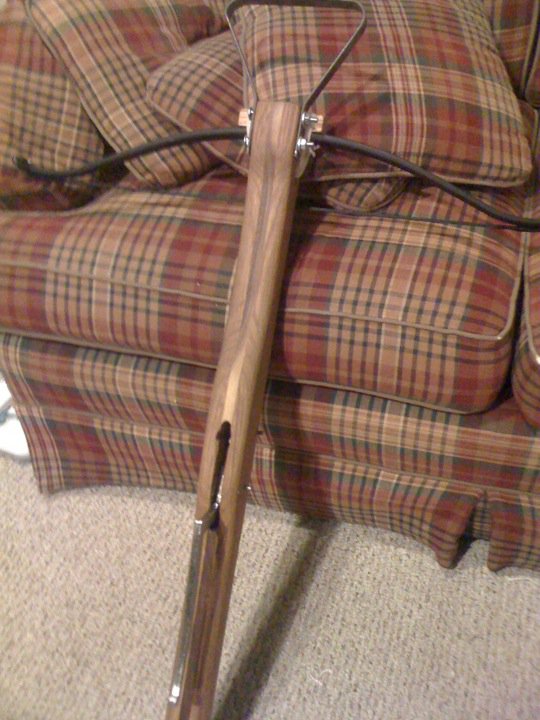 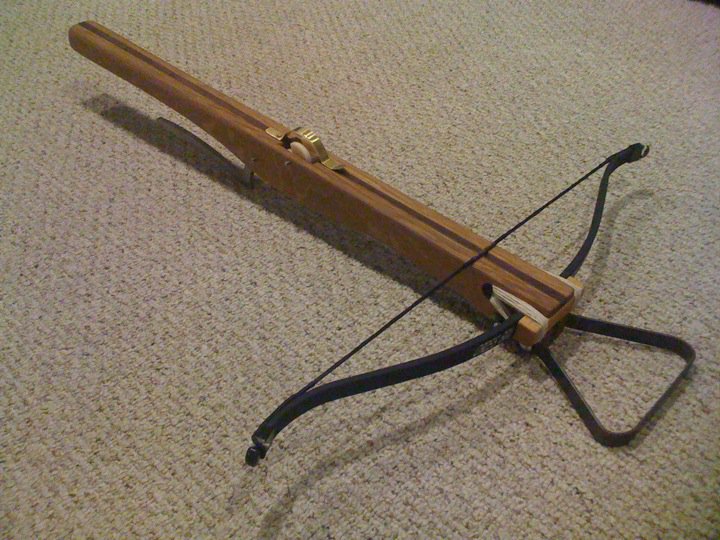 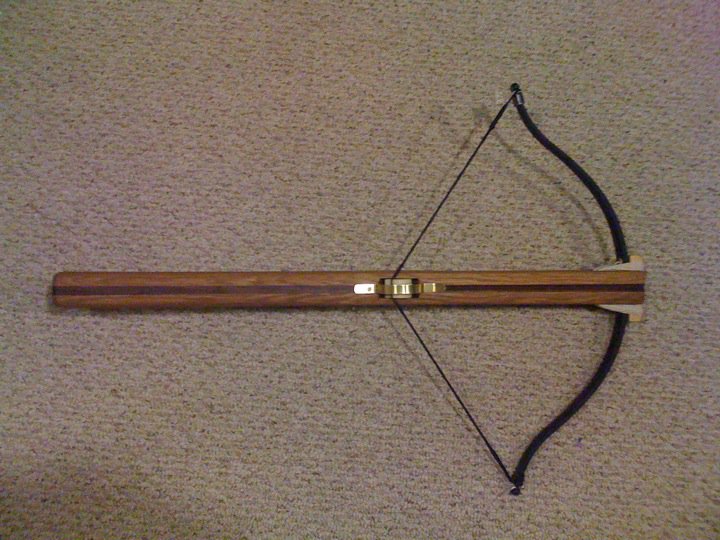 For a first project, I'd say this was a huge success!
Todd the archer

Great first effort. By the way what is the power stroke on that crossbow?

To save the work of building another crossbow you could mount the new prod on your first project.

As for your hand bow experience do you plan to continue shooting that also. I take it you don't have much experience with them as well. Don't sell hand bows short, in skilled hands their performance can be amazing.

Thanks to you both!

Todd, I can't recall the power stroke off hand and I'm traveling for work right now so I can't measure it. I'll let you know when I'm back in a few weeks instead of making a (probably inaccurate) guess. I'm hoping to build a new stock for the next attempt that includes much more ornate woodwork and attention to detail, so I think I'll start from scratch with a nice piece of walnut - I like the dark bows a lot after browsing around this forum. I hadn't seen much work to base my own off of when I built the first bow, and now I have Lightly's albums to inspire me to focus on craftsmanship on future projects.

As for hand bows, I confess that I'm not as good as I'd hope. I've been shooting traditional archery for almost a decade on and off, but I never have had the time to get better than mediocore with a hand bow. I have seen some incredible things on the range, though, I'm hoping that my next build will inspire me to get out to the range a bit more.
cowbrand

For a first project, I'd say this was a huge success!
Great first effort.
O.O

PS: A question comes to mind...the binding...how did you fix that in place?

Ivo, the binding is just a cotton twine looped through the binding hole and around a block that I gave two grooves to for the string with a rat's tail file. When I did the bindings, the string was too tight for me to cinch it up, but it seems to be holding very fast for now. I anticipate that it will loosen up with more time/use, and I'll cinch it when the time comes.
Sponsored content