Some forged heads, let me know what you guys think

Some forged heads, let me know what you guys think

Been a few since I posted my crossbow on here. I've been busy with a million other things going on. Anyhow I put together a small forge and have been tinkering with that lately and the end result are a couple items that slightly resemble something that might be launched at a target.

I was trying for medieval style bodkin and broadhead. I don't have a scale capable of weighing these so I am not sure how heavy they are, but they are made to take a 1/2" bolt and I probably could have worked the metal thinner as these are pretty girthy. 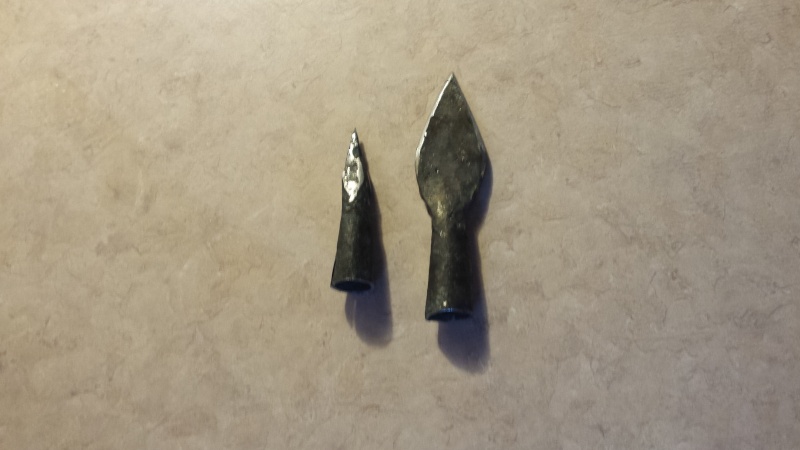 I like the bodkin! care to share your technique? I'm hitting the forge this week to make some points, and would love to trim the learning curve a bit.
Really good work!
mhof86

since these are honestly my second and third projects of my forging career (the first being the tongs to make them with). I watched a lot of the tutorials on youtube about forming the socket as that was the part that seemed most difficult.

Honestly it was much easier than I thought. Here is a picture of the tongs I made to help hold the arrow head once I cut it off the stock. 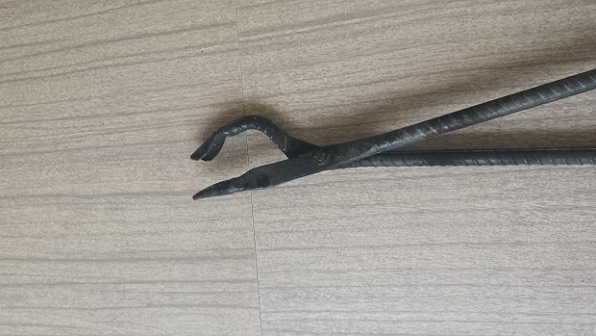 Those made it really easy to work the head portion after you split the arrowhead from the bar you are working off of.

I started with 1/2" rebar 24" long from Lowes ($1.90 or something for the bar)and heated one end. Work that down really thin and then roll it over to form the socket.

I used a railroad spike shaped and tapered down to a point half inch at the base and about 1" long to help shape the socket.

Once socket is formed heat the rebar just above the socket and cut it off. I went about 3/4" above the socket neck and had to trim some material off that small bodkin but it was just about right for the broadhead.

After its cut off grab from the socket end and work the head into whatever shape you are going for. straighten it up and sharpen if you like.

Since I am a noob and not experienced at all I ended up burning the metal and had to start over when I was trying to form a socket. The metal heats insanely fast when that thin.

After I cut off the head with the socket formed I then picked up the head from the socket end with the tongs right on the seam and after a couple hits to start forming the head the socket was totally screwed up and separating on me so be careful how you grab the socket end (should I be forge welding this shut because I just butted the ends together).

There are tons of videos on youtube and people way better at this than me. This was my experience but check out the videos and watch the pros make it look easy

Either way it was a lot of fun and I will definitely be making more.
mac

Those are pretty nice for early work.  I hope you stick with it. Head making is like nail making.  Consistent results and good shape come from repetition.

I have two things to point out.  The first is something that I am sure you have already noticed, and are planning to correct on your next ones.  That is that the edges of the sockets are a bit thick.

The other is a bit more subtle.  The overall size of the bodkin seems small compared to the diameter of the socket.  Most bodkins are sized such that the head will cut a hole large enough to pass the socket and shaft.  Some are smaller, I admit; but most appear to have been made with that "rule" in mind.

I "medievalized"  some bodkins recently by grinding them down out of the ones that Three Rivers sells.  My first attempts looked OK, but did not do well in the "hole test", so I had to have a different idea about modifying them.

Thanks for the tips Mac. I do want to get the weight down a bit by taking the socket and also the head on the broadhead thinner. I didn't think about the Bodkin "rule" though and will take that into account on the next ones. Hoping to get a few more done this weekend.
Sponsored content