Has anyone tried a Twinbow?

Has anyone tried a Twinbow?

I was just reading the TAC 15 thread, and wondered if anyone had any experience of the Twinbow? There is a video here:
Ivo

This crossbow much like the TAC crossbow, has been cursed and laughed at, then tested and defended, some tried to build a similar one and somewhat succeeded in mimicking various parts of this lever action complex. On my part, I've been polishing my skill at measuring it's components using a computer app ever since I got my hands on some pictures. Loots of cool little things in that crossbow.

One of our members did a great review on Archery Talk forum, Twinbow design has changed over time with some cool new customer desigend/suggested additions like the Six-pack riser assembly that got the bow string out of arrow's path allowing the use of a variety of broadheads instead of just low profile mechanicals.

The trigger mechanism is also very unique with it's colt style safety and wicked light or short traveling trigger considering this crossbow has a draw weight of around 300lb, The principal of the assembly is well known and is made similarl to a compound(vertical) bow release, but I have yet to see the picture of actual mechanism...wonder if it's not too much to ask the manufacturer for that bit of info.

I designed the Six Pack riser. SCM sent me the first prototype for ongoing testing over 2 years ago and I'm still shooting and hunting with it. I think the crossbow qualifies for the most unique in the industry. The power stroke is only 8 inches but with a 380 lb draw weight it shoots 312 fps with a 410 grain arrow. It's a total pleasure hunting with the crossbow. The limbs are highly stressed, maybe a little too highly. The trigger system is totally unique in the crossbow industry. It utilizes a thumb activated safety as is used on 45 cal auto handguns. 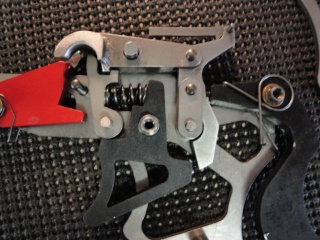 except being black in color. 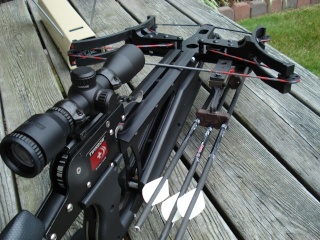 What are the differences between the Twinbow and Twinbow II ?
The Twinbow looks really cool and I would love to be able to test one out. Looks a little more handy than a TAC 15. And that it looks like it has the beaver tail safety is nice.

Didn't "know" you'd answer the post, but certainly hoped you would.

The trigger mech is much different from what I have envisioned, Big thanks for the picture...too bad my computer is broken, I'd love to pop this new addition into the 3d model I've been brewing up.

Love the crossbow despite the crazy draw weight, but hearing about #380 for the first time... I was positive it was no more than #300, is 380 a preset or is it with the limbs crancked to the max?

If my memory serves me right and I'm not sure if what I heard was arumor, but I think in the biginning TB1 assembly was 60% carbon fiber...the side plates that made up the stock and the upper part of the cocking lever, the tubes that made up the lower half of the lever and the shoulder stock/cheek piece tube, as well as some other components like the brackets used to secure the idler wheels on limb tips....again these are just rumors....now I think the crossbow is more metal than composite, probably to cut the production costs and make the bow more available to the public.

The riser assembly is probably the biggest confirmed change. If you visit arrowinapple.com there is a photo gallery of what is believed to be second generation Twinbow I with the riser assembly still having the bow string cross in the center...the new riser(as seen in Moon's pic) has two additional Idler wheels now total of six wheels (hence the name - "six pack") it was done so to eliminate the crossing of the string in the center and free up space for high profile fletching and broadheds. 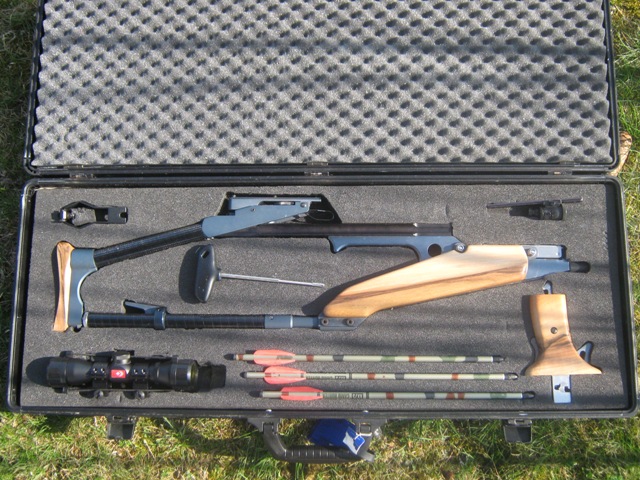 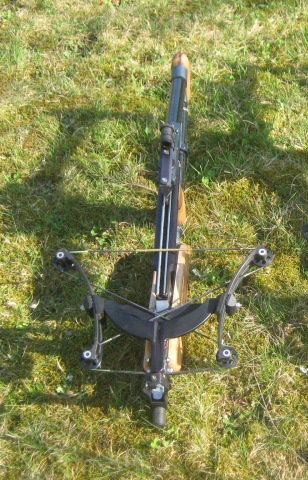 Thanks very much for the replies, I will try to get a look at one myself.
bekohmsford

Sorry to bump such an old thread; but I was wondering if anyone with a Twinbow could take a photograph of the area where the trigger mechanism is housed? I'm not too sure on my terms so here's an image of what I'm talking about:

The area just under the scope is what I can't find any decent images of; I can't see "inside" there to see what's going on. I'm wanting an image of that because I've been reworking an old 3d model I did of the twinbow recently and would like to complete that section. Huge thanks if anyone is willing to take the time to help me out and I hope I haven't annoyed anyone with this request.
Todd the archer

Try sending a PM to Moon. Still talks about this crossbow. Shame they didn't take time to resolve limb issues.

Also found this post which describes how the trigger works.

I have some experience ,not to good .has any one got a twinbow and the limbs not failed .I would like to here .
Sponsored content