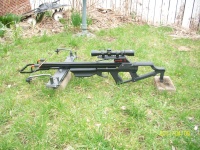 Just throwing it out here, but we have a very wide pool of talent and ideas here on "the Guild". Many of us have the knowledge, but not resources, tools, or know-how. All of us have varying amounts of capital to work with.

So why not share talent and resources? For instance I still have many designs to yet build including my theoretical "supersonic capable" catapult or "bow".

My only tools are my brain, a hammer, hacksaw and vice. As we speak I have no money to speak of. But, I see where my experience in design could benefit many with their projects.

Many of you sound very educated (engineers). Some are skilled CAD program designers. Some talented and experienced pro builders with a full shop of needed machinery.

I have a few parts of this and that as I buy crossbows and covert them to torsion. Need limbs? Need a riser? Have an old bow yu would like converted?

You all seem to like Nick Watts 5000lbs ballista and its performance. There is no way I can be humble about this but feel a part of his machines current and future performance is partly based on my "manuballista" work.

As Nicks work is public once posted, I have no qualms about sharing his/my ballista secrets in attaining the high velocities that seem to elude most historical re-creations.

As an example, my current manuballista build is partially to attempt to persuade him to go shorter with the arms/levers. In doing so however, I am also hoping go shed light on some of the work of earlier "experts" like Marsden etc. and without apology even those of the original innovators like Philon, Vitruvius, Alexander etc.

My work and theories are highly contraversal (until proven), and I have no qualms about challenging the math as long as I have reproducable upon demand results - so be forewarned some of what I propose seems proposterous (like a supersonic catapult or crossbow LOL) or that acceleration can occur without an acting net force.

My request for barter exchange. I am wanting a wooden stock with roller nut and trigger (not tickler), with a 20" draw on which to put my manuballista bolt on "kit".

In exchange I will make this person one of my kits for his own use and study. It will be a non-compounding model Identical to Nicks Orsova build.

Fully optimized, it will deliver the same kind of performance as Nicks machine, except with a much higher effeciency. For example 5000lbs pull using a 7500 grain doing 395fps verified is only pulling 1.5 grams per lb of pull.

My last builds performance produced 200fps with 350 grain and 40-50lbs pull, or about six grains per llbs of pull. Derrick Middleton who tested it was impressed and said 300fps with 100lbs pull is reasonable to expect.

My calculations show that at 150-200lbs pull, the performance should be on a par with the worlds fastest production bow. not bad for 2000 year old technology.

I have every reason to believe I can design a rope bundle powered torsion inswinger manuballista under 350lbs pull to break 400fps. (the uppage inn power requirements is to deal with the friction loss inherent in all rope bundle power sources.

I have a never built before gravity powered torsion manuballista design for someone to build....

CAD or computer simulations and or services welcome, all offers considered.

To suggest the Orsova ballista was an outswinger is simply ludicrous. Simply watch Gunny's mail call or Gunnies mail call on youtube, and then review the performance of Nicks machine.

All things being equal which would you rather have in a shoot-out?

BTW - my current build should hopefully be enough to convince Nick of the proper arm length ratio for the Orsova build. The Hatra design is diff.

Anyhow, the offer is open - barter only - no money exchange, postage responsibility of the sender....

Rather long winded as all my reply's (writer wannabe). Hope you all like the suggestion, and it may serve to hasten both builds and communal knowledge of making pointy things go real fast.

I envy you who have the added benefit of advancededucation.Without it I must be able to recognise known physics principles at work, be able to recognise, identify it. Without this knowledge I am no differnt that Newton or others that must figure these things out on their own. It is like re-inventing the laws of physics and all the various forms of acceleration and principals that effect it. Its already been done.
Todd the archer

No promises, but what exactly are you looking for with a wood stock? Something with a modern shoulder stock or a more medieval style?

Not familiar with roller nut releases with modern style triggers although I am sure it is doable.

What about the bolt groove or track? And what is needed where you intend to bolt your kit onto?

I don't have much as for a shop. I try to be as creative as I have to be to get things done. Don't really have much more than you. A small drill press, bench grinder, router, dremel, various hand tools, files and chisels, and a bench top joiner.

Hi Todd. forgot you do the tickler style trigger. I thought it would be cool to have a manuballista that could shoot wooden bolts like Nicks full size ballista.

I'd like it to have a shoulder stock and someplace to put a cranking device on it but have it not be too "modern" looking. Kind of a cross between a ballista and a medievel I guess haha. Hell, as long as it works well Im sure I'll be happy.

There is a fellow called "Aitor" (a historian) who made a nice interpretation of what an "original" might have looked like. I'll find a link and post tomorrow.

Heh, don't underestimate Todd...from what I learned...there is more to the man than meets the eye.

And just to set a few rules if we are to do this kind of thing (we'll try it in this topic before I make it a separate forum):
Any Barter Deal must have:

And you actually led me to stumble onto an interesting thought by mentioning "contribution to the forum", not a "must do" deal, but it would be great to see these projects in progress featured on the forum. I mean it's only fair that way.

As for stocks, I haven't built a compete crossbow from start to finish and liked it yet, but one thing that I'm happy with is the stocks. Don't have the time to offer building one for someone(from bed to work, from work to bed X everyday/no weekends), but I did try to put together a bit of a stock making guide topic to help people with their stock making needs. Also, the triggers topic needs refinishing...the roll-nut to modern trigger is possible - I've seen it

(I'll post it in the triggers topic, if I haven't already)

...and coincidentally the little low cost drop-in trigger solution I'm working out will be perfect for #100 pull, not sure about #150(that's what we'll be testing), but hey...who knows.

I'm on a verge of quitting my job right now (closing the lab for a while)kinda slow these days, so I just "might" be hanging out with you guys a bit more in the next few weeks. It would be awesome to brush the dust off of my tools and actually doing something in day time for a change.

See you all around.

Tood, here is a link to the only torsion "manuballista" picture (or re-creation) I have found. Here the stock "butt" is horizontal so that it can be braced against the stomach and pulled toward you (kinda dangerous??) but I want it to lie against the shoulder for firing. The crank will take care of loading. http://cohorsprimagallica.com/Aitor_Cheiroballistra/Aitor_Iriarte%27s_Webage.html

Im sure you have seen Nicks inswinger ballista so it would kind of be a blend of the two. Nicks machine uses a claw type trigger where the claw engages the string and is ratcheted back to firing position www.wattsunique.com

Since this is a pleasure shooter and curiousity build, the main use would be target shooting and display only, although Im sure it could take down game.

If you pm me your address, I can draw something up for you to think about while for when you can free up a little time. Theres no hurry as this build is just for me, truly a one of a kind. That I like.

Hi Ivo, thanx for posting some guidelines and allowing the board.Be great to see if it comes to anything or is a good idea.
Sponsored content

» Red Oak Board (x)Bow.
» Another Canadian on Board
» board bow cross bow