For a long time I've been subscribing to a site/blog called Hack-A-Day ...really cool site that collects and presents unique creations from all over the net.

Today I stumbled upon this wicked little machine and just couldn't not share with you guys.

DIY table saw cuts through anything, leaves no room for mistakes 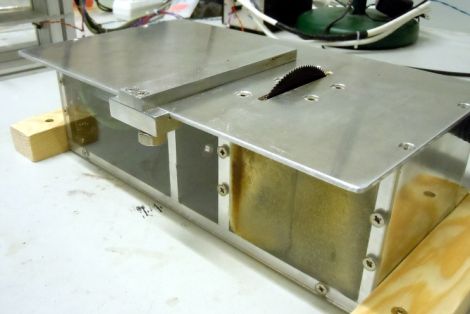 Students in the BASTLI lab at the Swiss Federal Institute of
Technology Zurich had been stuck using underpowered and unreliable saws
for quite some time. The saws often got stuck while cutting through PCBs
and were generally a drag to use. When group member [Mario Mauerer]
came across a big and powerful brushless motor in his basement, he decided it was time to upgrade the lab’s cutting tools.

Along with fellow student [Lukas Schrittwieser] he built a test rig
to see how powerful the motor really was, and satisfied with the
results, the pair set off to build their own table saw. The enclosure
was wrapped up pretty quickly, leaving the pair to source a power
supply. Rather than purchase one, they built a 700w monster switching
PSU to power their saw.

As you can see in the video below the saw chews through most things
with the greatest of ease, but the students added a “boost button” to
the saw just in case they need to run it at full tilt.

While we can’t exactly overlook the lack of finger and eye protection
in their demonstration, it does look like a great little tool to have
around.

Cool little project. Not something I need right now but still cool.

if you come a cross plans for a small mill or router that would be sweet.

Well most of the plans I have are cnc conversion plans for already existing machinery...but I can throw your way a few cool router table and drill press attachment plans.

Edit: Almost forgot...Gingery Series: Metalworking Shop [from scrap] has some cool stuff...I mean if you're a technological masochist like me.