I need some help...(Wooden Compound Crossbow)

I need some help...(Wooden Compound Crossbow)

Hi, I'm new to the crossbow forum, and new to crossbows I guess. I've been making small crossbows for a little while, and this is my first large one.

The problem is that I can't drill out the area in there because nothing is fitting to drill it out. I've been using the Dremel Trio and a bandsaw for the crossbow. How could I drill out the inside so it is a nice smooth rectangle shape for the cable to ride under the crossbow? Its a sort of medieval/compound/modern/wood crossbow. Using a drill has only chipped the sides of the wood and made it look bad. Its going to take a lot of sanding to get rid of those, and to smooth out the crossbow.

Here are some pictures of the problem: 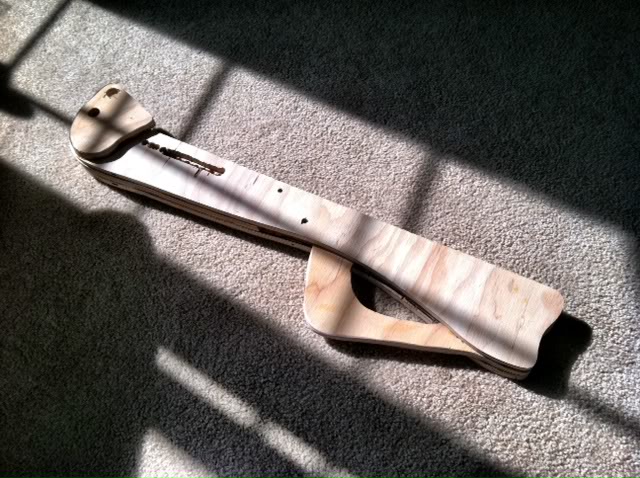 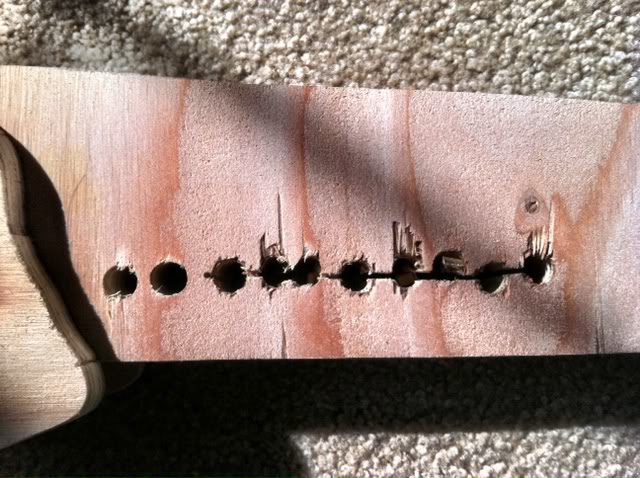 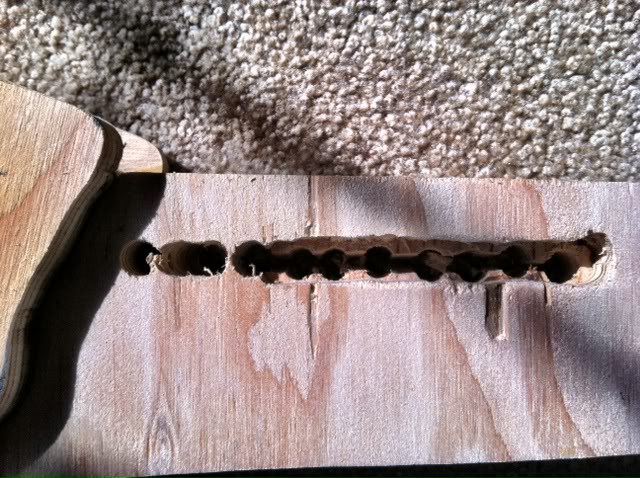 Welcome to the forum, I believe the tool you need for the job would be a router with a straight cutter bit. Used with a guide, it should give you the results you are looking for.

That is an interesting crossbow you are putting together, perhaps you can tell us more about it.

Also it looks like plywood you are using. Not trying to nit pick but probably not the best material to use, but if that is all you have to work with it would be better if the grain ran lengthwise.

Any questions do not hesitate to ask.

I didn't really have a choice with the wood grain because when I got it, the long side was against the grain and the side that went with the grain was too short to make the cut.

Would the router bit be long enough to go through? Its 1 1/2 inches thick.

The crossbow is made from scraps in my dads shop. Been making it without plans. The whole thing is made entirely of wood and should be a 40-50 pound crossbow. Its not even close to an actual hunting crossbow, but it is fun to shoot. All the wood on the crossbow is going to be sanded down to a rounded shape, except the top where the groove is going to be.
Basilisk120

This sounds more like a job for a jig saw or a coping saw than a Dremel. The coping saw has the advantage of being cheap to buy but more labor intensive.

Something Something Dark Side
Evanology

Oh, I have a coping saw in a drawer some where. Sounds fun... I also have a jig saw, but the wood is so tough, that the blade on the saw bends and doesn't cut anything.
juancheco

It would be desirable to moisten the material. Thus the grain remains compact and easier for the task. Here in the carpentry, the guys work that way with this material. They also use a saw called mouse tail. It is similar to an endless saw , except that the leaf is a teeth wire . That way you can cut the material without any problem. Remember to wet the wood and press at the same time, because you run the risk of bloat.
'lybbert

Tips to prevent tear out; Use masking tape, lay it down to cover the area to be worked and a larger area.
Clamp your work piece to a sacrificial backing and cut into or through the backing.
Use a knife to score the edges of your slot deeply.
Use a fence on your router. Work from both sides, cutting in shallow passes.
Cut your bandsaw blade, insert into a hole, resolder it, and cut from the inside.
A band saw cut started from the outside, but in a place you can conceal and reinforce might work. using a fence will help keep the edges straight.
Product called a drill saw- tip is a drill, rest is a spiral toothed saw. one I have is 1/4 in dia.
Ivo

Welcome to the forum Evanology, I see guys have already covered some(practically all

) of the ways to can get that piece moving.

To add to the list...I would mask the piece, layout the hole, score the lines with a knife, drill a row of holes, then clean out the unneeded material with a chisel(working from both sides), and file the gap smooth. That's the simplest way I can think of.

The crossbow looks familiar. Can't put a finger on it this very moment, but perhaps Youtube?

You need an upgrade bro.

or some damn sleep (YEH! YOU IVO! You nocturnal bastard!!!)

I showed you his vids couple of weeks ago. Let me refresh your memory.

to the forum. I haven't subscribed to your channel yet, but will do. Keep those updates coming, Ivo and the guys on here are all about crossbows and will help out for sho!

Ahhhh....yep. That certainly rings a bell.

. I don't really comment on youtube videos except do a few invites to the forum on occasion. Anyway...there are a few things that can be suggested *since Evanology took on a challenge of building a crossbow with easily accessible materials/tools* lets have a little fun here.

I'll just go down a list of what to lose and what to improve...I'll keep it short.

Insert fiberglass posts into your pvc's. In US, these posts/rods can be found in any major hardware store. White/yellow/orange/red in color with a reflective sticker on one of the ends, 5 feet in length, and costs about a dollar. One should be enough to power up both the top and bottom pvc's.

2. The wheels and the way they are mounted need a little bit of attention.

2.a. Pushing off of the principle of any bow - "The lighter the tips of the bow, the better they accelerate". So, to get the most out of your bow, you will need to lighten the wheels first. I suggest drilling out five or six holes like so... 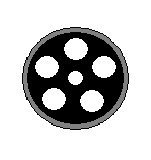 2.b. The bolts you used for wheel axels are also weighing down the tips too much. Replace them with something lighter, say...a 3/16" framing nail. Sort of like this (it's spread out a bit to help in understanding where is what 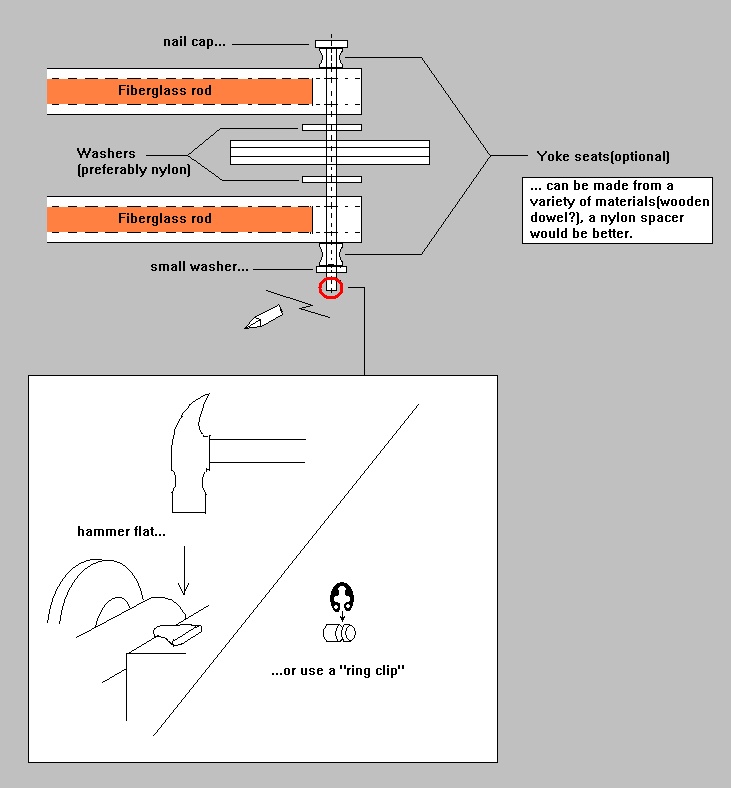 ...You can keep the fiberglass rods running the full length of the pvc's and drill through them at the tip...this will reinforce the tips more. It's an optional step in my opinion, because the pvc tips should handle this light a load...up to you man.

...basically you need three strings...2 short ones(yokes) to connect to the limbs...and 1 long one(bowstring) to connect to the yokes. Keep in mind, in the video they show five strings - two yokes, two cables, and a bowstring. In your case you are using a "pulley" system(strings not attached to the wheel, no cables involved), not a cam system(string and cables attach to the cam). Just connect it the same way you did it before, only this time using a yoke (which will help bend the limb evenly).

...the gap that you were asking about earlier is actually open on one end (haven't shot my compound in a while

), so you can just cut in from the frond of the stock with a band saw and mount the riser last.

4. You may also notice that once everything is set up properly, the prod will draw farther - easier.

So you will probably shorten the prod even more. The whole idea with compounds is to get more draw length while keeping limb travel short (shorter, more powerful limbs, bending less, but giving a longer/lighter draw via compound system) >>>http://www.howstuffworks.com/transport/engines-equipment/pulley.htm

5. As a last note...It's all about draw length when it comes to speed.

Make sure that the arrow is seated as far back as possible - contacting the string or in your case the nut(latch). The longer the string is given to accelerate the arrow, the better. Because every inch the string travels accelerating the arrow - energy stored in the limbs is being transferred to the projectile...packing a punch known as kinetic energy.

From Wikipedia, the free encyclopedia

The kinetic energy of an object is the energy which it possesses due to its motion.[1] It is defined as the work needed to accelerate a body of a given mass from rest to its stated velocity. Having gained this energy during its acceleration,
the body maintains this kinetic energy unless its speed changes. The
same amount of work is done by the body in decelerating from its current
speed to a state of rest. 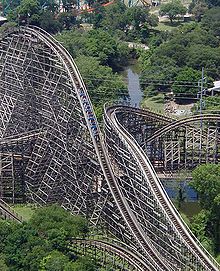 
Ever need any new crossbow project ideas, just PM me...I got a few fun ones.

I noted some flat fiberglass rods at a big box lumber store in the chain link fence area. I think they are used to stiffen the ends of chain link fence panels / attach the tension bands to the fence. I saw 4' lengths in black or white.
Evanology

Thank you Ivo! All this help is going to be printed out. That's funny that you've seen some of my videos, a rare chance to say "small world." Thanks to everyone else too. I ended up just covering the hole with a piece of wood and filling in the cracks with wood putty. I tried some of these methods too, but outdoor treated plywood off a job site is too tough for water.

Definitely going to build a better second version. Shooting this one is a lot of fun, but it's really weak compared to a real crossbow.
Ivo

Haha, yeh...I try to keep an eye out for anything crossbow related. Glad to see people like you picking up the topic independently and sharing it with the public. Keep up the good work.

So you've technically completed this build as I saw on youtube. That nylon string is a bitch to tie, so I understand why you didn't use the yokes as proposed...it's all good.

So, given the gained experience, the future builds will be more and more refined. Any ideas for the next project? I like the challenges of working with what's on hand, so it's bound to be fun no matter which turn the build takes.

Stop by more often man, check out the "crossbow building resources" forum and lets get the ball rolling on your builds and get that channel some views. 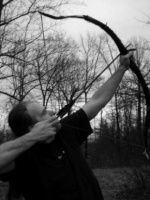 That's a really cool idea you have going there Evanology.