Early this year I decided to order a cranequin via Matuls.pl in Poland.

After a couple of weeks e-mail contact to determine some technical data I placed the order in mid-February.


The estimated pruduction/delivery time at that moment was about 3 to 4 months.


In the end of July i began to get impatient , so I decided to get in contact via e-mail.
Couple of days (or two weeks) after that I received the answer the company has some problems with their craftsmen and decided to get new ones. My contact told me then the cranequins would be ready end of August beginning September.

When September almost passed completely I again wrote an e-mail, but did not receive answer immediately.
I decided to drive to a reenactors convention I knew matuls had a stand, too.

When I spoke to the salesman he told me he was my e-mail-contact and pretended to have received the long expected cranequins while he was on the tour to germany and has to check them when he returns.
He informed me to get back to me in the next two days.

On the third day I received two mails from him.

In the first on I learned about the poor quality of the cranequins and his offer about some disscount on future orders.

The second one claimed that those cranequins were checked again and that there would be one -contrary to the first e-mail- that would suffice to be sold. He told me to send some pictures in the afternoon, too.


When I answered thee second e-mail in the early afternon I demanded from him to see detailed pictures of the cord-loop-mounting, the ratchet bar with crosss section hints itself and if posssible the opened housing with a view to the gearwheels.

After that I did not receive any information until this point.

Yesterday I decided to chancel the order completely and I finaally regretted my contact with this company.


At this point I must state, that I would not suggest any contact or order with this company, especially concerning the budget cranequins.

I hope I prevent someone else making this long and bad experience I made recently.

I know this company...just forget about them. I want to recomment you in my honest opinion the best (quality) firm, not only in Poland but in Europe also. Actually whole Europe is buying there. I've already bought there a dozens of times and I am 101% satisfied. Fortunately they also have a cranequin in theirs stock.

There are also other very intresting firm in Poland:
http://www.gambeson.pl/
http://www.platener.eu/index_en.html

The last one can do a metalwork, I think also for crossbow. The most interesting thing is that he can use medieval techniques which is very important when you are going to do a replic.

He isn't just a craftsman, he is an artist! The sign on his web side shows how good is he:
"In the near future I'm fully workload (about until end of 2014) and I can't take new orders right now. In May 2014 I will take new orders. Thank you for understanding."

Thank you Widal for the recommendation!


But I am done with ordering a cranequin, I will build my own!

Besides the cranequin I see on the link ist not close to the requirements I insist on.
The leather loop on the bottom for example makes me shiver considering safety (I´ve heard rumors about matuls earlier crancs to have the same weakspots)! 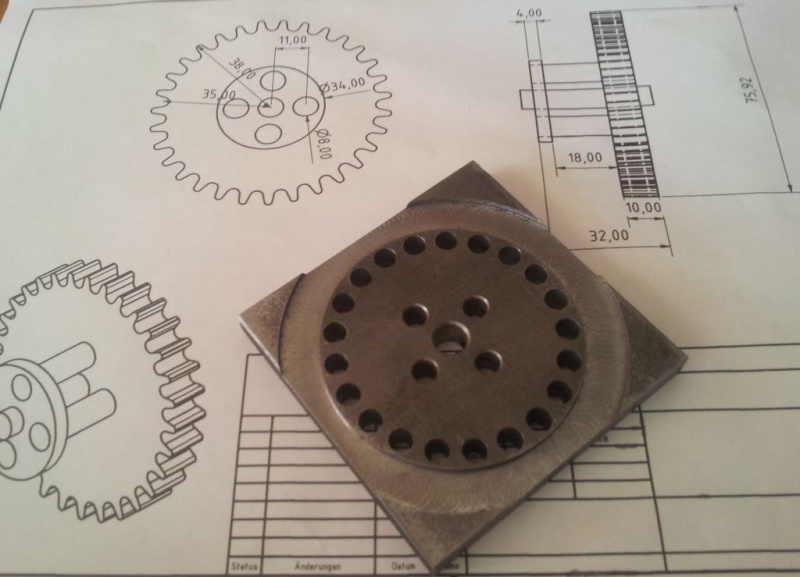 (Measurements in Background do not mirror the actual pattern)