Thanks in advance.
Geezer

The question involved circular stirrups.  I haven't seen any that were perfectly circular, but there are plenty that are more or less oval, narrower at the top, slightly flattened on the bottom, with a ridge running along the bottom third.  You see these a lot on central European bows.  Western european bows, like Payne Gallwey's Flemish arbalest tend to have squared stirrups.  Most likely, they reflect the sort of riding stirrups used in the area.  What you don't see is a wide, flattened spot at the top of the stirrup, so it will sit square against the bridle (binding) block at the required angle.
So bows like the Ulrich V would have ovoid stirrups, assuming they didn't simply have a little nose-ring for hanging from a saddle. Same goes for the South-German bow in the Danish natl. museum in Copenhagen.  Rectangular section bows like Payne Gallwey's arbalest or the Maximilian I bows in the Kunsthistoriches Museum in Vienna are more likely to have squared-off stirrups. (tho in fact, the Max I I copied has a different stirrup... really too small to put a foot in, but that's another question entirely.  Geezer.
HeroSK

Many thanks Master Geezer. After evaluating some Chinese and Islamic drawings I started to think that circular stirrups are somehow Chinese oriented and eventually spread through west. Yet, it seems we need more evidences to support such a claim other than few drawings.
Geezer

Yeah, there's a  lot of difference of opinion among scholars whether crossbows were invented once and propagated outward from the source (China perhaps) or if they have been invented numerous times in various places.  I tend toward the multiple-place theory, based on some stories I have heard of very primitive crossbows among American Indians (or Native Americans if you prefer) When you get down to it, the logical transition from a bow-trap set up on a game trail, with an arrow lying in some sort of holder or groove, to a portable bow-trap that you can point and shoot, seems pretty simple/obvious.  But there really are differences in regional types.  Chinese crossbows f'rinstance, almost never have any sort of shoulder-stock, just a 'pistol-grip' behind the lock, whereas even early Roman crossbows (in the few surviving illustrations) have at least a short butt-stock that's held alongside the cheek, just like an arrow from a handbow.  I would still wager that stirrup-shapes for crossbows probably reflect the shapes of stirrups used for saddles.... once a culture starts using a stirrup for saddles anyhow.  Probably made by the same guys... the ones with the forges.  I'd be interested to hear more about Asian stirrups if you dig up any more info.  Geezer.
HeroSK

I am not against the idea of multiple-place theory but merely tried to get more information about Chinese influence over Muslim arm technology especially after Mongolian invasions. For example, below 15th century manuscript about Timur's siege of Symrna in 1402, depicting a defender with a crossbow which is almost exactly same as another crossbow drawn in Chinese military manual, Wu Ching Tsung Yao written in 1044. 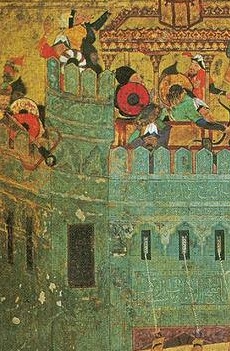 There are some other similarities too. Islamic crossbows have a deep V shape at the end of the stock for placing bow, like some Chinese counterparts.

Again those my not be sufficient enough to claim anything but it is fun to dig about them.

Geezer here:  HeroSK-thanks for submitting the drawings of Mongol/Tarter/Chinese crossbows.  Clearly the drawing on the left shows a butt-less pistol-grip crossbow with deep recurve prod in the Chinese tradition. And of course the second bow shows a similar deep recurve bow.  Some other source in my collection-perhaps Paterson's 'Guide to the Crossbow' has a drawing of a Mameluke drawing a deep recurve crossbow as well.  And of course the stirrups in these pics are very-very round.  Not oval, like Central European bows, but quite round.   Now we're getting somewhere!  Geezer
Sugarbuzz 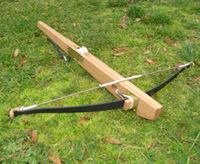 Just a little idea that popped into my head looking at those round stirrups was seeing someone sliding them over a hook permanently mounted in a wall or stone and allowing them to draw the string back with the full weight and strength of ones body rather than using ones foot or some other aid. It might allow for hand spanning a much higher draw weight? Maybe just a silly notion.

I've been studying different stirrup styles, but cannot say I have seen anything like those!
kenh

Waacky thought.  Were those round stirrups intended for hooking over saddle pommels or some such?
Geezer

Geezer here, concerning round stirrups.  When I first went to look at the Padre Island crossbow bits back in 1994, it was clear we had a lightweight Spanish crossbow, much like the ones in the armory at Malta. That's a very common style. So we were reasonably sure our crossbow remains had once featured a very small nose-ring at the fore-end.  Question:  was the nose-ring strongly enough attached to fit a cocking lever to the ring, and could the crossbow be hung up on a hook to span as suggested above.  Examination of the Padre Island bow indicated the ring was probably driven hot into a pre-drlled hole, so it would fit pretty tightly, but in fact, the only thing that could have kept it in place beyond the fit was a Very Small pin (no more than 1/8 in. dia) fitted underneath the typical cheek-plates that surround the prod and reinforce the fore-in. The pin was long gone, but the hole was there, and my friends it was positively dinky. If you tried to span that prod with the help of the nose-ring, the ring was going to end up flying across the ship.  So in that case, the round ring was clearly intended for hanging the bow up on the wall or Maybe a saddle.  Some later, 17th century clap-lock stocks use a half-round loop fitted to the fore-end of the stock with a solid pin, that could possibly be used as an anchor-point for a 'wippe' type push-lever.
Other bows, like the beautiful Maximilian I bows in Vienna, are clearly meant to be spanned with a Spanish-style cranequin.  In that case there IS a stirrup, but it's much too small for normal human feet.  Perhaps if Maximilian I was a Satyr, with very narrow goat-feet, he could have put a foot in there. The stirrup (not round, but rather D shaped) could have been used for hanging up the bow, but Maximilian-type bows often have a separate hanging hook on the bottom of the fore-end.  So I suppose the jury is still out on whether That stirrup is intended to be functional. So the question about round stirrups remains open... cool.  Geezer
HeroSK

@kenh, I though influence of Chinese over Muslim crossbows would be more logical since Chinese drawing is dated to much earlier date. It could be also the other way around but apparently this is not the case.

There are other similarities too; both crossbows use recurved composite bows, both have no butt. When compared to Spanish Crossbows they have much larger stirrups. It is easy to see that when you compare stirrups with size of bow. They were indeed designed for placing foot so I disagree about fixed hook theory of Sugarbuzz

. Here, another butt-less crossbow with composite prod from Mughal manuscript. 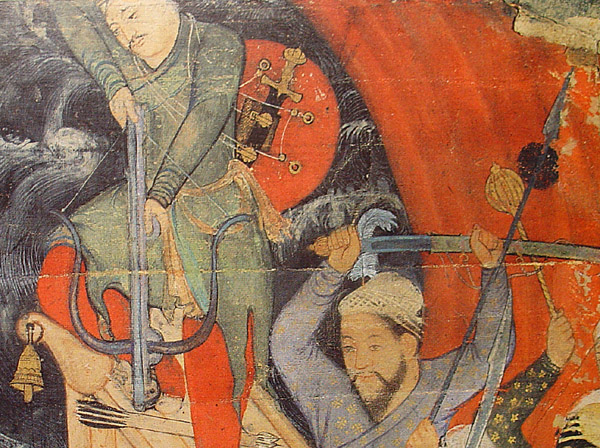 Was just a passing fancy when I saw the round stirrup, perhaps in another dimension that's what they did.

I like the idea of a static defender being able to easily draw a high power crossbow quickly without cumbersome aids but my knowledge of this type of crossbow is minimal at best.
HeroSK

Nice idea actually. Another idea about getting help from stationary objects was invented long ago.  It was a kinda crossbow, called Gastrapethes, invented by ancinet Greeks aroud 399 BC. It's need no mechanism soever, just put your belly behind of stock and push with your whole body and voila, crossbow spanned and ready to shoot. Here, instead of pull, the push action doing all the work.

I had heard of the gastraphetes before, yet somehow I had never seen one in action! That's an interesting mechanism, if a little awkward looking in use. Makes sense to push rather than pull, I used a push down method on a crossbow I made, simply because it had no stirrup and the wippe I was working on was incomplete. Only problem with that one was I worried about a lock fail breaking my thumbs. It worked though. Thanks for the link, cleared up a misconception I had about those crossbows.
Sponsored content