I Want to present to you a few 16-th century crossbow photos, which adorns our forum as the first sample of medieval crossbows :flower: (It also adorns the desktop of my computer - is one of my favorite

What a beautiful weapon. Is this a Spanish crossbow? It reminds me of the Padre Island crossbow.

I will have to see about obtaining the Paterson book. Thanks for the info!

This model and the other one from the Valletta palace armoury are all similare they where military issued weapon (goat foot lever)during the big "siege" battle against the Turks in the 16 century.They are very similar with Spanish (but in my opinion better build and adorned ) nothing surprising they came from the same era . If I referred to the different museums I visited they where widely represented at this time in various places. What is interesting in Valletta armoury is the number of them preserved and same model conferming the mass distribution.It's mean is a reliable,simple and efficient weapon for military use. Paterson estimation is around 400# pull.
stoneagebowyer

I grow more and more fond of such simple designs, and the fact that they were issued to "common" soldiers, the rank and file soldiers. History only seems to record the nobles and royalty and such, and the person who sweated, bled, and suffered is forgotten so often.

I also appreciate this kind of crossbow, as it was used in the New World, and gives us a connection in North America to medieval and renn. technology, and after the crossbow was replaced by gunpowder weapons.

I will be certain to build one of this style this year.

Thanks for the pictures Jeep. I agree with Dane, there is a beauty to some of these simple crossbows.

Something Something Dark Side
stoneagebowyer

A Spanish bow is my on my short list of projects, concurrent with a late Roman bow, after I finish the heavy German crossbow. I am going to order a couple of extra prods soon. I guess you can never have or build enough crossbows

Yes, that is very very like the Padre Island bow that Geezer "coined". It is one of my favorites to make; I have one in the works right now. Erm. For the last year and a half, I might add... heh! SO many bows to make, so little time!
Geezer had a lovely bit of purpleheart hanging about the shop and he told me that I could not make a Padre Island bow from it, it would be too difficult... all the while knowing that I would of course, have to prove him wrong!

I love its apparent simplicity, and its obvious elegance.
I also love its utilitatian roots.
Dane, here is a bunch of photos from when I built one for the Fla Museum of History.
http://www.flickr.com/photos/swifthoundbows/sets/72157626848234259/
Again, I will emphasize, that this is the way WE do it here at New World Arbalest, and not necessarily the only and absolutely correct way!

Our measurements are correct for the bows that were found in the wreck of the spanish galleon, off the coast of Padre Island, as Geezer was allowed to handle, and measure those artifacts...

I am always open to suggestions, and thoughts...

Thank you, Lightly. I like especially the way you make the reenforced nut sockets.

Why not purpleheart? I have a nice chunck of yellowheart here in my shop I will be using one day for a crossbow. Tropicals can be stunning, and a lot of fun to work with. They can be super dense, but the weight can be nice in a weapon, as it helps faciliate accurate shooting.

Last night, I was re-reading a volume of revisions and ghost works by HP Lovecraft. The story I was reading was "The Mound", about one of Coronado's men who went off and get himself into huge trouble with an evil race of creatures who lived in this bizarre underground realm. I thought of the Spanish style crossbows a couple of times.

If only he had had one, he may have fared better.

Last night, I was re-reading a volume of revisions and ghost works by HP Lovecraft.

Ha! Dane, as far as I'm concerned, your reputation just shot up about 50 points.

Lol, Gnome. Fan too? I recall the exact circumstances surrounding of Lovecraft, and this is no made up story. Briefly, I found this coffee table type book on carnival freaks at the Sidney Lanier branch of the library, before it was renamed the Amerila Earheart branch, and a nice connection as our house with a quite terrifying haunted attic (that was not the first time I saw a ghost, but the first time I encountered one), and the house, on Valley Spring Lane, may have been lived in by her at one point when she lived in North Hollywood.

I was going to check it out that night, and it was a weekday evening, and for reasons I can't explain, my dad had a total fit, totally lost his temper, and demanded that garbage of this kind never be brought into his house. It was so extreme, I still think he had a long-lost pinhead first cousin or a sister with a beard. So instead, I saw this paperback by some guy named Lovecraft on a wire rack, with the cover illustration being a dude with snakes in his hair. My dad never said a word about it.

I just went and looked it up. It was an anthology, Tales of the Cthulhu Mythos Volume 2, Ballentine Books, with one of those very lurid covers they had which had nothing to do with any content. And I was hooked.

Yeah, I thought I was quite the afficianado, but I'd never even heard of "The Mound". Thanks! I briefly skimmed an online version, but I'm going to look for it in print, my prefered delivery method for mind-bending eldritch terror.
Geezer

"Why not purpleheart?"
Because I'm allergic to the stuff and like many hardwoods, it's very high in silicates. I told Lightly she was welcome to build that darned purpleheart Padre bow, but only if whe worked on it when I was outa the shop, and she has to clean up the dust.
It will make a very handsome piece, particularly if she uses bronze for lockplates and cheek-plates, like the Maltese bows at Valetta.
Geezer.
Lightly

It is a gorgeous bit of wood... and the stock is pretty well shaped, the nut socket is mortised into the stock, and a few bits of bronze are laid aside... it is just Time... I've got bows to make for Pennsic, and three client bows! And before that the rush to make bows for that movie, and for Gulf Wars...

And, like Geezer says, I can only work on it when he is outta the shop. And *I* wear a mask while sanding it... same for walnut now. But, someday.... someday...
stoneagebowyer

Someday will never come, Lightly. Be careful. And dusk masks are a good thing. I use mine a lot anymore.

Ever Their praises, and abundance to the Black Goat of the Woods. Iä! Shub-Niggurath!

The Horror in the Museum and other Revisions is one place The Mound is published in. Look for the corrected 3rd edition by Arkham House, a beautiful hardcover with a nice dust jacket cover. I found it in one of the great, late used bookstores in Boston years ago, when the ass end of Newbury Street really was a good place for students and hipsters and punks and artists to hang out affordably at. The Crawling Chaos and The Meadow, both favorites of mine, are in this.

Del Ray came out with an inexpensive trade paperback edition too a year or so ago.

I am really lucky to live in the middle of Lovecraft country. I’m still trying to track down where he lived in Brattleboro for a couple of summers. And who knows, this summer I may spend some time in Innsmouth. I hear there is a rickety bus that makes that trip, and it sounds fun, even if no one seems to blink.
Jonathan Waller

Sorry for the thread necromancy. I was wondering if you could remember where you took or got the photo of the large cross bow? Or at least where I might look to find out where it is?
Many thanks, and I would like to say an interesting site.
Thanks
Jonathan

Ivo wrote:Got a little bit of eye candy for you guys...probably the most massive crossbow I've seen so far. 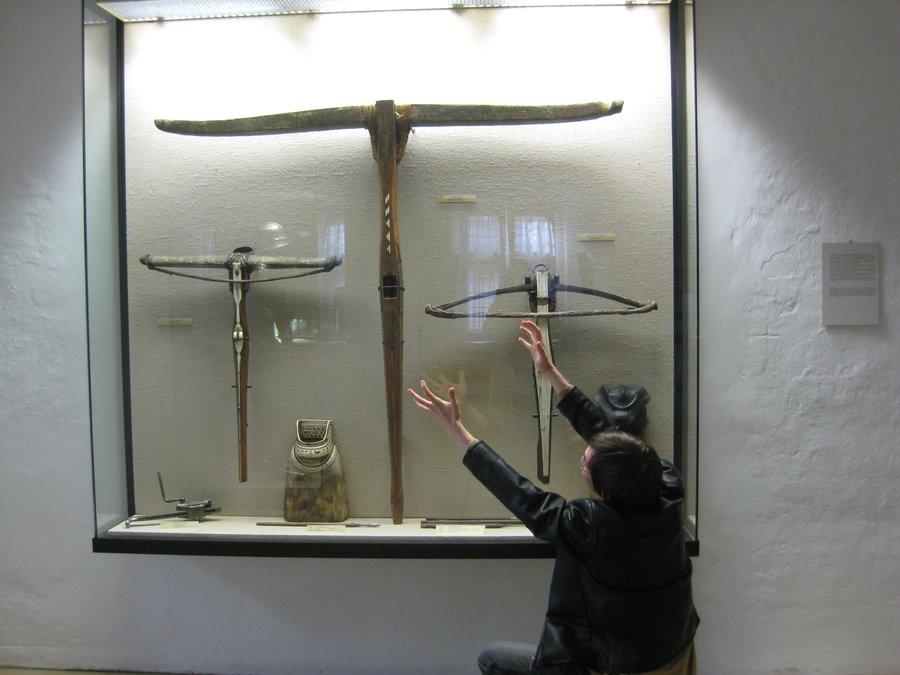 I can't remember what museum it's in, have it saved in the bookmarks somewhere...

Anyway, if anyone knows anything about these huge bows, what they were used for and how...it would definitely be great to hear.

Thanks and You're Welcome

I suspect they were wall mounted "light artillery". Not too long ago I saw a Rick Steves Travelogue of the three smallest countries in Europe. I believe it was Lichtenstein where they showed these two guys loading and firing such large, yoke-mounted crossbows across the castle's grounds, from tower to tower for target practice.
Geezer

As for the pic of three crossbows, including the wall-bow. If you assume the bow on the left is @ 30 inches long, you'll be about right. Geezer.
Geezer

And yes, it's light artillery... a ganz-rustung, used for tower defense, or siegecraft. Geezer.
Jonathan Waller

All that makes sense and I have heard of them...
Still any idea where this actual photo is from?
Thanks again.
JW
Ivo

I don't remember where I dug up this photo, probably some blog. Searched with that photo and it seems that Arbalist is the only site sharing this picture freely...strange.

However, there are forums out there that require one to register to even get a glimpse of what they're about and that goes for Google searches as well, so if you're interested in digging for it, you might want to look around "TheOtherForum" or was it "ThatOtherForum" (no joke, that's the name). From what I remember, those are the highly historical guys heavy on accurate replicas of Medieval Arms&Armour.

ok thanks.... I will give that a try.
Best
Jonathan
Taxus

This crossbow is in the Bavarian Army Museum at Ingolstadt.
Jonathan Waller